The health-care industry accounted for almost 90 percent of the government’s False Claims Act recoveries during 2017 and 2018, the report said. Physicians, hospitals, and clinics struggled most with False Claims Act violations that involved billing the government for services that weren’t needed and attempting to to direct business to certain drug companies or health providers, according to the report.

The False Claims Act bars companies from intentionally making or filing false claims that defraud a government program. The Justice Department most frequently comes down on hospitals, doctors, and clinics that make false claims under Medicare or Medicaid. Justice Department officials say prosecutors are placing a high priority on rooting out and pursuing those who cheat government programs for their own gain. 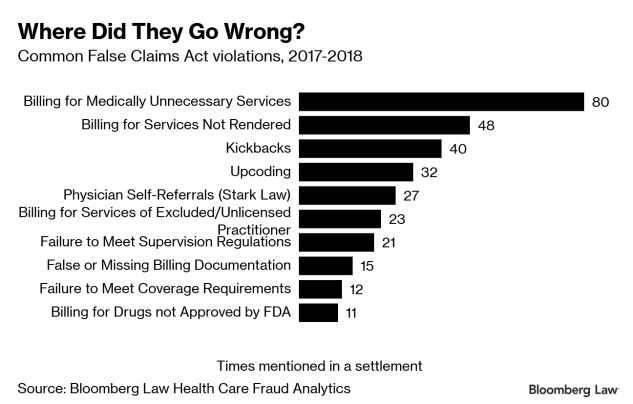 The government in 2017 and 2018 expanded its enforcement beyond just hospitals and doctors to include entities like drug treatment providers, the report said.

The DaVita investigation garnered the largest settlement in 2017-2018 at $270 million, according to the report. 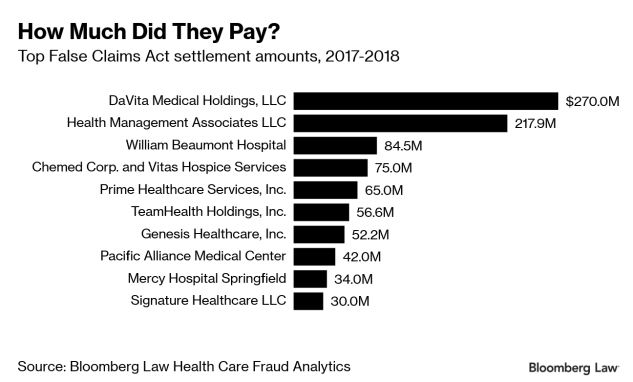 Peter Grauer, chairman of Bloomberg Law’s parent company, is a member of DaVita’s board of directors.

Betsy Mountenay, a Bloomberg Law legal analyst and co-author of the report, said that this type violation does more than merely cost taxpayers. It could actually harm a patient.

“One particular area where we are seeing this is with opioid prescriptions. Doctors prescribe these dangerous substances to patients who don’t need them for the level of pain they are experiencing, and the next thing you know, the patients are addicted,” she said.

Paying for patient referrals in health-care is known as a kickback and is one of the most common False Claims Act violations, according to the report.

Physicians, hospitals, and clinics were named most often in kickback schemes. The most common unlawful kickbacks were payments to doctors for prescribing certain drugs or referring patients to specific treatment facilities, according to the report.

Health representatives target doctors when hawking their wares because they make the decisions about what treatment or drug to prescribe without actually paying the bill, according to Stephen Calkins, a former general counsel of the Federal Trade Commission and professor at Wayne State University Law School. “Issues arise when the person paying the bill is not the one choosing the product.”

A kickback can also call into question a patient’s treatment. “When patients seek treatment from a doctor, they are trusting that doctor to make decisions in their best interests,” Mountenay said. “But when doctors are making treatment decisions based on how much money they’ll make, that’s a major conflict of interest.”

Health Management Associates, a former hospital chain, paid over $260 million for multiple infractions, including its alleged payments to physicians in exchange for patient referrals.

Attorneys and analysts said health companies can avoid run-ins with the Justice Department if they adopt and follow strong fraud compliance programs.

Three out of 10 providers that settled False Claims Act complaints also entered into corporate integrity agreements with the federal government. Fifty-four health organizations, including William Beaumont Hospital, have entered into the agreements, the report said.

Beaumont paid $84.5 million in 2018 to settle claims that it overpaid or gave other perks to eight referring doctors.

“Over 30 new policies and procedural checklists along with workflows were created to assist employees, physicians and other workforce members in better understanding how to comply,” she said.