A nurse and pharmacist go over health-care information on a computer terminal.
Photographer: JOSEPH PREZIOSO/AFP via Getty Images

Health-care and life sciences transactions continued at a strong pace in May, with 231 deals announced or closed, the third month in 2021 with at least 225 transactions.

The total volume of deals is up nearly 70% compared with Covid-dominated 2020, said Larry Kocot of KPMG in Washington.

Health-care information technology and software led all sectors in volume for the second month this year, with 39 deals announced or closed, followed closely by life sciences and pharmaceuticals at 38.

“Technology continues to drive innovation and greater efficiency in health care as cost and quality remain focal points in the drive to value-based care,” Kocot said.

Medical devices and supplies also had a strong month with 32 deals.

The recent Supreme Court decision on the constitutionality of the Affordable Care Act “is likely to create greater certainty and fuel greater investor interest in the health-care sector,” Kocot said.

Stakeholders also will be looking to see whether President and his allies in Congress are able to advance ambitious policy goals related to prescription drug prices, which could have a significant impact on the sector, he said. 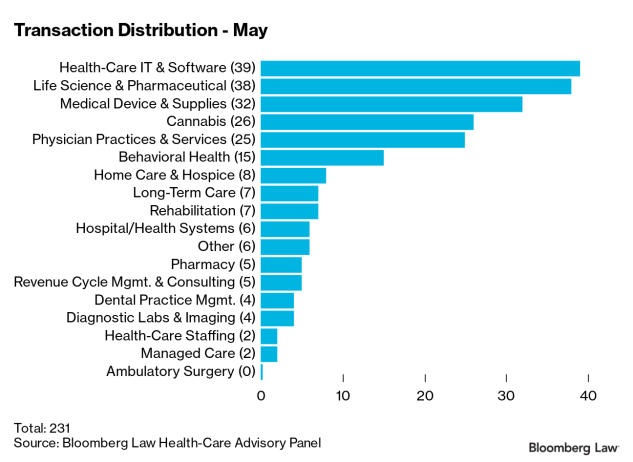 KPMG in Washington and FocalPoint Partners of Chicago prepared the curated year-to-date list and the list of select May transactions for Bloomberg Law.

Life sciences and pharmaceuticals was the second most active sector in May with 38 deals closed or announced, said Michael Stotz of FocalPoint Partners in Chicago.

Sector activity during the Covid-19 pandemic has been driven by the need for new therapeutics, Stotz said. Transaction volume was comparable to April, which saw 39 deals, and up from 27 in May 2020.

The flow of deals in the clinical research organization subsector has been particularly strong in recent months, as pharmaceutical companies increasingly look to outsourced service providers for drug research and development, Stotz said.

Notable deals in the subsector include Headlands Research’s acquisition of Summit Research Network, an Oregon-based organization specializing in psychiatry, dementia, and other age-related memory conditions, he said.

Also noteworthy was Altasciences’ acquisition of Calvert Laboratories, a preclinical research provider based in North Carolina.

Transaction volume has been growing “due to an increased need for geographic scale within clinical research organizations, as well as an increased desire for firms to conduct clinical trials virtually due to Covid-19,” Stotz said.

Medical devices and services had 32 announced or closed deals in May. Important trends in the sector include the return of patients to pre-pandemic patterns of care, and the efforts of hospitals to catch up on elective procedures, said Ross White of KPMG in Washington.

Physician practices activity remained strong in May with 25 deals closed or announced during the month, matching the figure from April, said Hector Torres of FocalPoint Partners in Chicago. Volume continues to outstrip that of 2020, which saw just five transactions in May. 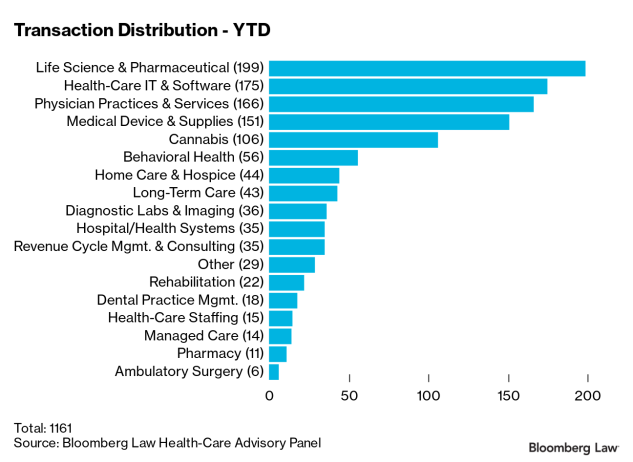 Private equity interest remains high in the fertility sector, as buyers look to increase their share of a fragmented market, Torres said.

Several trends are driving interest in the sector, including increasing rates of infertility, greater use of in vitro fertilization and other services, and the higher average age of women at childbirth, Torres said.

May was also a strong month for activity in the behavioral health sector, with 15 deals closed or announced, up from just three in April 2021 and three in May 2020.

The surge in transactions was driven by investments in autism treatment and substance abuse treatment, according to of Epstein Becker & Green in Newark, N.J.

Notable deals in the autism treatment sector are Caravel Autism Health’s acquisition of the Center for Autism Treatment, and Center for Social Dynamics’ acquisition of JF Autism Services. Both transactions will expand the acquirer’s geographic reach and patient volume, Torres said.

“Substance abuse treatment has experienced robust demand driven by the current mental health crisis in the United States, which has been exacerbated by the recent effects of Covid-19,” he said.

Cannabis deals are also continuing strong growth, with 26 announced or closed deals in May, bringing the total this year to 106, said Zachary Taylor of Epstein Becker & Green in Newark.

Those figures indicate the sector continues to thrive in both the short term and long term, with deal volume likely to exceed 200 transactions before year’s end, he said.

Trulieve Cannabis Corp.’s announced acquisition of Harvest Health & Recreation Inc. is a sign of things to come, Taylor said. The combined business will have operations in 11 states, including 22 cultivation and processing facilities and 126 dispensaries.