Health-care deal volume continued at a robust pace in October, with transactions expected to reach 3,000 before the end of the year, analysts say.

October saw a total of 223 announced or closed mergers and acquisitions, up from 213 the month before. As many as 400 deals could close in December, based on the number of transactions now in the works, according to Gary Herschman of Epstein Becker & Green PC in Newark, N.J. Total deal volume year to date is at 2,379, which already exceeds the volume for all of 2020 (1,936).

The predictions come as President Joe Biden’s signature economic plan makes its way through Congress. The House on Nov. 19 passed the sweeping spending package, but its fate in the Senate remains uncertain.

“While economic headwinds could always change the course of investor sentiment in the last quarter, it still looks like the strong momentum for deal activity in 2021 will continue throughout the remainder of the year, and likely throughout all or most of 2022,” said Larry Kocot of in Washington.

Congressional action on the spending bill could have an impact on the landscape for health-care deals. But recent changes to the proposed legislation suggest the impact won’t be as negative as initially feared—especially in the pharmaceutical sector, which was bracing for drug pricing proposals that have been since pared back, Kocot said.

The overall impact of the bill could be positive for investment, he said.

KPMG in Washington and FocalPoint Partners of Chicago prepared the curated year-to-date list and list of select October transactions for Bloomberg Law. 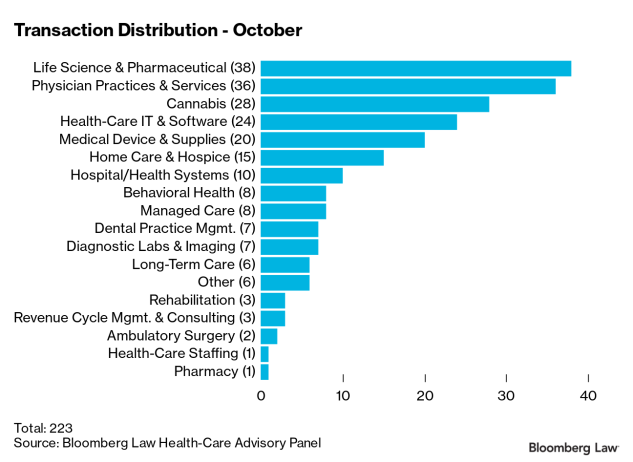 Life sciences and pharmaceuticals led all sectors in October with 38 deals, followed by physician practices and services with 36. The total deal volume in the life sciences sector was over 400 year to date, up from around 300 at the same point in 2020.

Physician practices and services activity was on par with September, and marked a jump from October 2020, which saw 22 deals. Expectations in that sector are also very high for the rest of the year, Herschman said.

“Because of the disproportionately high number of physician deals in the pipeline that are planning to close this year, we certainly could see 75-100 deals in this sector close in the December timeframe,” he said.

The standout deal of the month was ‘s $5.2 billion majority investment in VillageMD, a national provider of primary care services, continuing the trend of retailers investing heavily in health care in recent years, said Hector Torres of FocalPoint Partners in Chicago.

VillageMD currently operates over 230 practices in 15 markets across the U.S., including full-service primary care facilities in some Walgreen pharmacies. The deal will bring Village Medical practices to over 1,000 Walgreen locations by 2027, Torres said.

The dermatology sub-sector saw four transactions closed or announced in October, including Schweiger Dermatology’s acquisitions of New Jersey-based Warmuth Institute of Dermatology and The Derm Group.

These deals will allow Schweiger to increase its presence in New Jersey with 15 new locations in the state, Torres said. 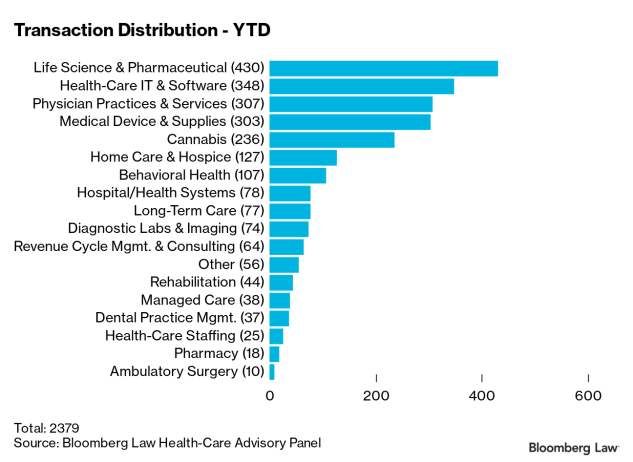 The hospital and health systems sector finished the month with 10 deals announced or closed, up from 5 in September and down from 14 in October 2020.

The month’s biggest merger brought together and under a new name, ScionHealth, Torres said. The combined entity, based in Louisville, Ky., will operate 61 long-term acute care hospitals and 18 community hospitals in 25 states.

The deal calls for LifePoint Health to invest $1.5 billion over a three-year period to improve technology and equipment, improve care delivery, and support professional growth for employees.

Health IT has been the second most active sector in 2021, with 348 closed deals year-to-date. But investors will be watching closely to see how the sector responds to a waning of the pandemic and a possible shift from remote health care and telehealth back to traditional in-person settings, Kocot said.

Congressional action could also have a substantial impact on the sector if temporary rule changes designed to make telehealth access easier are made permanent, he said.

The cannabis sector saw an uptick in deals from last month, with 28 announced or closed deals in October, said Zachary Taylor of Epstein Becker & Green. Transactions are moving beyond dispensaries and manufacturing facilities into secondary services, such as compliance and consulting, he said.

The sector has seen 236 deals so far in 2021, and the strong pace appears likely to continue, driven by the desire of larger companies to expand into new geographical areas, he said.