Negotiations between companies will more often include contract clauses steering patent disputes to a particular federal court, following a ruling from the Federal Circuit that will force a drug maker to retreat from challenging patents in an administrative tribunal.
Photographer: Getty Images

Health-care mergers and acquisitions continued at a hot pace in April with 207 deals closed or announced, the third month in 2021 that broke the 200-deal threshold.

Only four months in 2020 had as many as 200 deals as the Covid-19 pandemic persisted, according to Larry Kocot, principal and national leader of KPMG’s Center for Healthcare Regulatory Insight.

Projections of continued strong economic growth suggest that merger and acquisition activity will “remain robust for the coming months,” he said.

But tax and health-care cost offset provisions in legislative packages favored by congressional Democrats and President could create headwinds for the health-care and life sciences sector.

Chances for passage of major bills in the narrowly divided Congress remain unclear, but incremental health-care reforms—including possible drug-pricing legislation—appear possible as the parties begin to position themselves for the 2022 midterm elections, Kocot said. 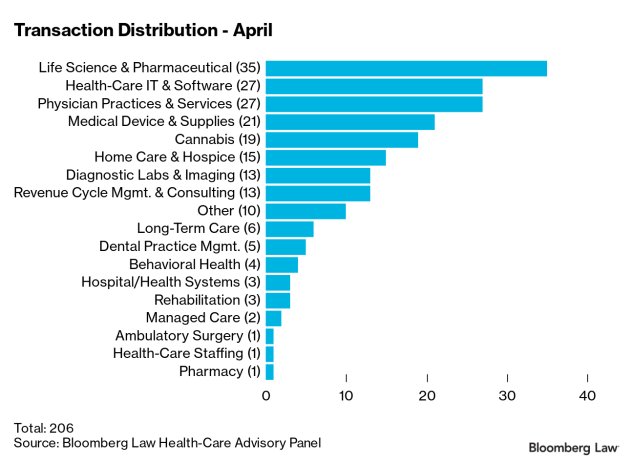 KPMG in Washington and FocalPoint Partners of Chicago prepared the curated year-to-date list and the list of select April transactions for Bloomberg Law.

A desire to take advantage of low tax rates on long-term capital gains, which could increase under Biden’s tax proposals, is driving interest in deals among physician practices, said of Epstein Becker & Green in Newark, N.J. Practices also are attracted by the corporate-infrastructure advantages that come with being part of a larger group, he said.

The sector was tied at 27 for the second most active in April. The total was down somewhat from March, which saw 41 deals, but up from just six in April 2020.

Gastroenterology and eye care continued to be active specialties in April, with four and five deals closed, respectively, said Hector Torres of FocalPoint Partners in Chicago.

In the eye-care sector, New York-based ophthalmology platform SightMD expanded into New Jersey with the acquisition of four practices in Ocean County, N.J. These acquisitions “reflect SightMD’s active inorganic growth strategy and first venture outside of the New York market as the platform begins to extend its regional geographic reach,” Torres said.

Activity in the cannabis sector showed no signs of abating in April, with 19 transactions announced or closed, and year-to-date activity has been almost double that of 2020, said Zachary Taylor of Epstein Becker & Green in Newark, N.J.

Deal volume in April was concentrated in the 13 states that have already fully legalized cannabis, but brisk activity in Pennsylvania and Florida suggests some companies believe these states may legalize recreational use as well, he said. 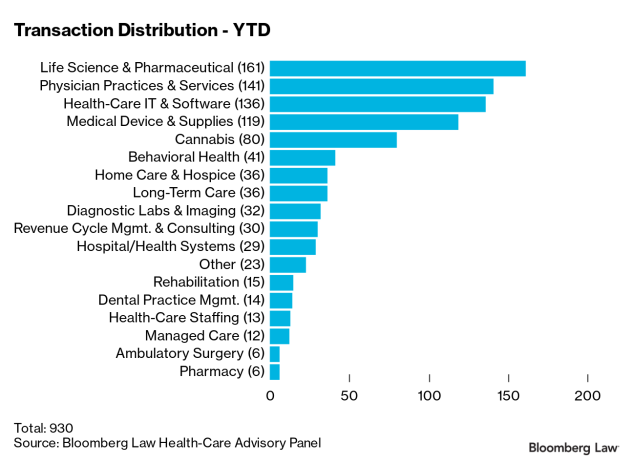 The pandemic has driven interest in urgent-care sector deals, said Torres. Testing for Covid-19 has created a lucrative revenue stream for urgent-care clinics, and consumers continue to prefer them to emergency rooms.

A notable April deal was FastMed Urgent Care’s acquisition of the urgent-care assets of Tenet Healthcare. FastMed currently has 105 locations in North Carolina, Arizona and Texas. The transaction adds 87 urgent-care centers operating under the CareSpot and MedPost brands in Arizona, Texas, Florida, and California, making FastMed one of the largest urgent-care providers in the country, Torres said.

The health IT sector tied for the second highest number of announced and closed deals in April, at 27, down from 40 in March. Consumer demand for virtual care and provider demand for innovative health-care technologies are likely to continue despite falling Covid-19 case numbers and deaths, Kocot said.

The life science and pharmaceutical sector, with 35 announced and closed health-care transactions in April, didn’t match its pace in March, which saw 57 deals. But the total was well above the 23 transactions during the same period in 2020, and the sector could produce as many as 450 deals in 2021 if the current pace continues, Kocot said.

The medical devices sector had 21 announced and closed deals in April, and appears primed for bigger things in the months to come, Kocot said.

“Given the reopening of hospitals and the resurgence of surgeries and other procedures, the sector could see increasing growth, which could fuel investor interest in the sector,” he said.

The activity demonstrates the increased demand for home-based care as more Americans get vaccinated and the economy begins to return to normal, Patel said.