The purchase of Botox maker Allergan Plc by AbbVie Inc. in May helped make the month a healthy one for health-care transactions. An Allergan office in Medford, Mass., is seen in this 2019 photo.
Photographer: Scott Eisen/Bloomberg

The 104 transactions in May represent the lowest number of deals announced or closed in any month this year, down from 106 in April. Still, the 686 deals year-to-date are “well ahead” of the 456 deals during the same period last year, Larry Kocot, a principal at KPMG LLP and a national leader of the firm’s Center for Healthcare Regulatory Insight, said.

Deal volume in the pharmaceutical sector continues at a steady rate as drugmakers rush to find vaccines and treatments for the coronavirus, according to Anjana D. Patel, a member of Epstein Becker & Green PC who serves on the firm’s National Health Care and Life Sciences Steering Committee.

“Interest in this sector is expected to remain high for the remainder of the year as the worldwide race for potential Covid-19 therapeutics and vaccines development continues at a rapid pace,” she said.

Still, it isn’t clear when the number of deals will match the higher monthly volume that occurred during the first quarter of the year, Kocot said. 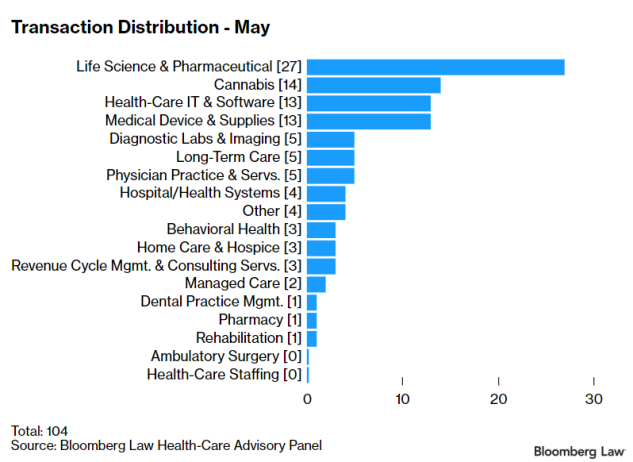 KPMG, Washington, D.C. and FocalPoint Partners of Chicago prepared the curated year-to-date list and the list of select May transactions for Bloomberg Law.

The life science and pharmaceutical sector continued to lead transaction activity with 27 in May and 134 year-to-date.

AbbVie’s acquisition of Dublin-based Allergan for approximately $86.2 billion contributed to the trend, Patel said. That was by far the largest deal in May among transactions with reported price tags.

“Pharmaceutical and biotechnology companies are actively seeking new deals to scale up their pipelines in this race,” Patel said. 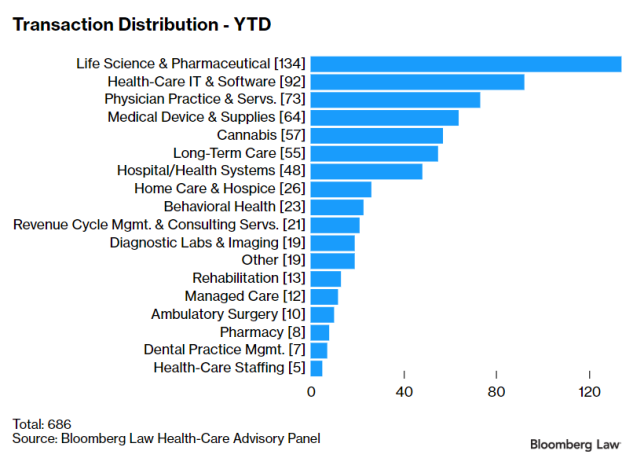 Independent hospitals and physician practices are exploring partnerships as they slowly recover from the financial impacts of the pandemic and as elective surgeries start to rebound, Gary Herschman, a member of Epstein Becker Green’s Health Care and Life Sciences Steering Committee, said.

“They are concluding that being part of a larger company with substantial capital (and better access to more) will best position them for the expected resurgence of Covid later this year, and potentially the next pandemic or recession in a few years,” he said. “The strong desire to remain independent is fading.”

As concerns over the pandemic decline, hospital deal activity is expected to pick up in the second half of 2020 and into 2021, according to FocalPoint Partners Managing Director Hector M. Torres and Vice President Aaron Newman.

The hospital market in most major metropolitan regions already is largely consolidated into several “mega-systems,” Herschman said. Much of the new activity is “just outside of such regions” and also in “small-town America,” he said.

A major deal between Southfield, Mich.-based Beaumont Health and Akron, Ohio-based Summa Health was canceled in May.

The merger, first announced in January, was called off due to Covid-related impacts on operating activities, according to Torres and Newman. Beaumont had reported a net loss of $278 million during the first quarter, they said.

“As the U.S. gets ready for the anticipated second spike of the virus later this year, co-existing with the flu season, manufacturers and distributors of personal protection equipment are being eyed by many, including private equity and venture capital firms,” Patel said.

Year-to-date cannabis transactions (57) are comparable to the total deal volume in 2019, Zachary S. Taylor, an associate in the Health Care and Life Sciences practice at Epstein Becker Green, said.

“Despite the impact Covid-19 has had on many health care sectors, cannabis continues to be an active sector,” Taylor said.

In some states, cannabis-related businesses are considered essential businesses, and some states have suspended cannabis regulations to boost access during the pandemic, he added.

States are looking at medical marijuana as a way to make up for loss in revenue due to the pandemic, Taylor said. That’s “driving smaller players to seek mergers with those providers who are already established,” he said.