Hospital staff elbow bump each other in front of tents set up for additional capacity and testing outside of the emergency department at Ronald Reagan UCLA Medical Center in Los Angeles, Calif., on March 19, 2020.
Photographer: Patrick T. Fallon/Bloomberg

Health-care transactions in February outpaced deal volume from February 2019, but they were down considerably from January. It likely won’t be clear until summer how deals will be affected by the new coronavirus pandemic.

While the 123 deals closed in February would indicate that 2020 is on track to be a record year for total deals, the world has changed in the last few weeks given the economic disruption caused by the virus, Lawrence Kocot, a principal at KPMG LLP in Washington, said.

“All bets are off in terms of how this global health crisis will impact overall deal volume in 2020,” he said.

February’s 123 deals announced or closed compare to 213 in January.

“If the Covid-19 crisis moderates, we anticipate that deal volume will accelerate,” Kocot said. At this point, however, it’s “far too early to tell when we will see markets and investment return to any business as usual.” 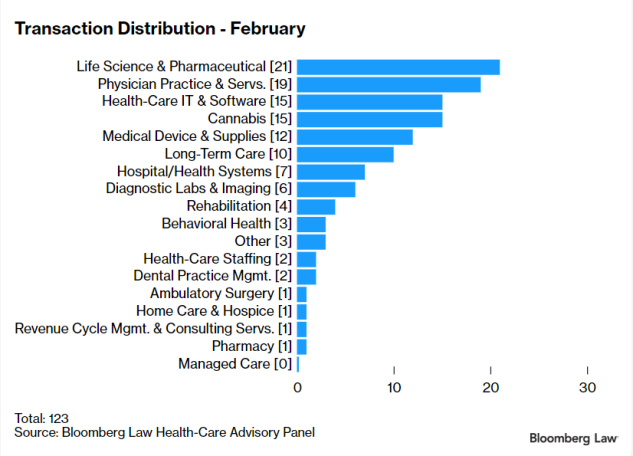 The life science and pharmaceutical sector once again had the most transactions in February, ending the month with 21 deals. But that’s down from 41 transactions in the sector in January.

Still, the 21 life science and pharmaceutical transactions, 19 physician practices transactions, and 15 health-care information technology transactions in February make those “subsectors of great investment for the second month in a row,” Kocot said.

The cannabis and medical device sectors also had double-digit deal volume, with 15 and 12 transactions respectively. Long term care “attracted attention,” with 10 transactions, although activity was down significantly from a year ago, Kocot said. 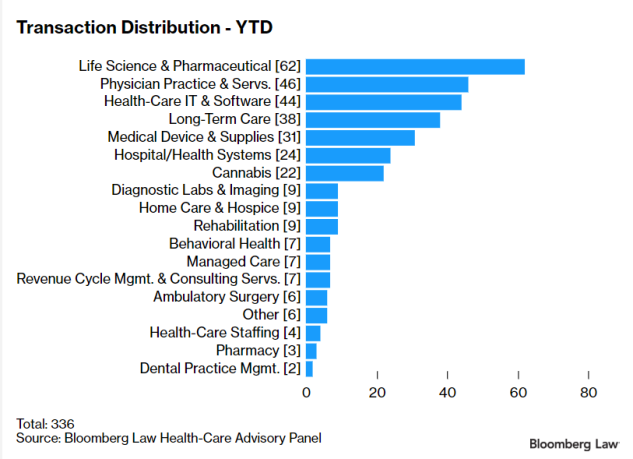 The outlook for the rest of the year remains to be seen due to the uncertainties surrounding the coronavirus outbreak.

“The global coronavirus pandemic really hit our country hard in March, and we don’t expect to get a full picture of its real impact on health-care M&A volume until late this spring,” Gary Herschman, a member of Epstein Becker & Green in Newark, N.J., said.

Some deals in process may be impacted by the resulting instability in the financial markets, but private equity funds and large companies are still actively pursuing deals because the health-care industry “is largely recession-proof,” Herschman said.

By summer it should be clear if there was a dip in new activity in the pipeline that started in the March to April timeframe, Herschman said.

The high deal volume for life science and pharmaceuticals in February and over the last year has been driven by “innovation and regulatory focus on drug pricing and transparency,” Anjana Patel, a member of Epstein Becker Green’s health-care and life sciences practices in the Newark and New York offices, said.

The medical device and supplies sector “continues to see an upward tick in the number of transactions, and there are no signs that this will be slowing any time soon,” Patel said.

Health information technology also “remains an area of great interest for investors as vendors try to leverage the increasing importance of data and how it is collected and utilized within the health-care industry to achieve lucrative outcomes,” Patel said.

But hospital and health systems deal volume dropped from a year ago, Patel said. “This may be a result of significant consolidation in this sector, with current deals involving smaller community and rural hospitals merging with larger urban systems.”

(Updated with additional reporting in ninth paragraph. An earlier version corrected the firms that contributed to the report)