Health-care deals declined in April as the coronavirus pandemic has forced investors to delay or reconsider planned mergers and acquisitions.

But transaction activity is expected to pick back up later this year as physicians and independent hospitals hard hit by canceled procedures look to partner with larger health systems to help relaunch their businesses, analysts say.

“The widespread economic and health uncertainty caused by the Covid-19 pandemic clearly has investors pausing, delaying, or canceling planned transactions, at least for the short term,” Larry Kocot, a principal at KPMG LLP and national leader of the firm’s Center for Healthcare Regulatory Insight, said.

But while health systems are pausing merger activity as they focus on near-term operational issues related to Covid-19, merger volume is expected to accelerate over the remainder of the year, Aaron Newman, vice president of health-care investment banking in FocalPoint Partners’ Chicago office, said.

An increase in transaction activity will depend, however, on how the reopening of states and businesses progresses, how infection rates change, and the prospects for effective treatments and vaccines, Kocot said. 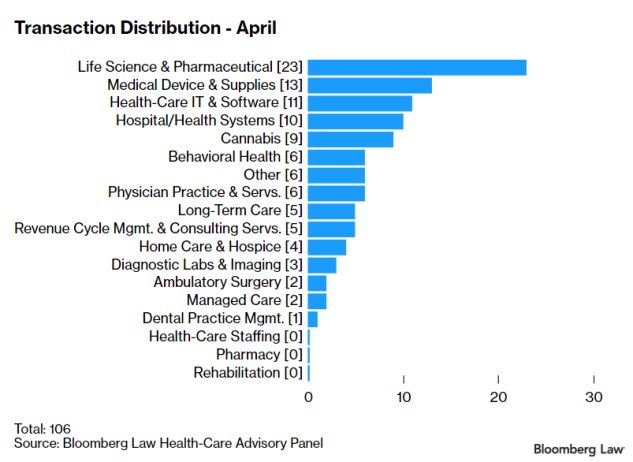 The life science and pharmaceutical sector led transaction activity in April with 23 deals.

The 107 transactions in that sector since the beginning of the year have been driven by growing demand for potential Covid-19 treatments and vaccines, Ross White, manager of KPMG’s Center for Healthcare Regulatory Insight, said.

A notable deal was QuestCap’s acquisition of a 40% stake in Amino Therapeutics related to Covid-19 therapies. Financial terms weren’t disclosed.

The medical device and health-care IT sectors both reached double digits in April, with 13 and 11 transactions, respectively. Those sectors have been called on to help address changing health-care delivery through telehealth, remote patient monitoring, and other services to manage care for patients outside of traditional health-care settings, White said. 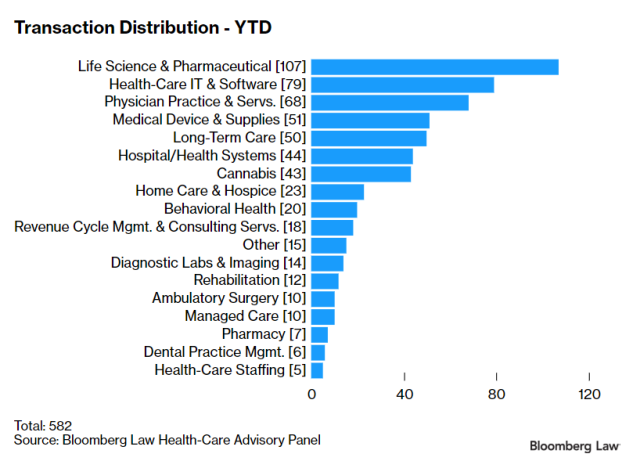 Many independent hospitals and small health systems around the country are feeling the ill effects of having to postpone or delay elective procedures and other non-emergency services as a result of Covid-19, Gary Herschman, a member of Epstein Becker & Green in Newark, N.J., said.

But merger and acquisition activity among independent hospitals is expected to rise sharply towards the second half of this year and into 2021, as they look to partner with larger health systems with substantial capital and advanced infrastructure to help them weather difficult times, he said.

For the same reason, merger activity of distressed hospitals and those in bankruptcy is also expected to increase, Herschman added.

Physician groups across the country, who have similarly been devastated by Covid-19, will also be flocking to join larger organizations—such as hospital systems, national healthcare companies, and large platform groups backed by private equity investors,” he said.

Merger activity in long-term care, which was on the rise, has declined substantially with only five transactions in April, as many facilities deal with the heavy toll of the pandemic on their residents, Anjana Patel, a member of the health-care and life sciences practice in the Newark and New York offices of Epstein Becker Green, said.

Transaction activity in long-term care facilities may take longer to pick up given the increased government scrutiny many are likely to face following the pandemic, Patel said.

The members didn’t comment on any particular transaction or party discussed or listed in this article.