Health-care industry dealmaking continued at a faster clip than last year in July, despite a surge in Covid-19 cases in hospitals.
Photographer: NIC COURY/AFP via Getty Images

The number of health-care and life-sciences transactions dipped a bit in July from the previous month, but the pace remains strong and the total could reach 2,900 by year’s end, said Larry Kocot of KPMG in Washington.

The impact of rising Covid-19 case rates remains a wild card, and the investment outlook could dim if the health-care system is swamped by new cases in coming months, Kocot said.

Uncertainty over drug pricing policy and health-care funding also could affect the pace of dealmaking.

“Both of these factors could create a considerable amount of uncertainty for investment for the next quarter that investors will be considering as they look beyond the short term to the longer term horizon,” Kocot said. 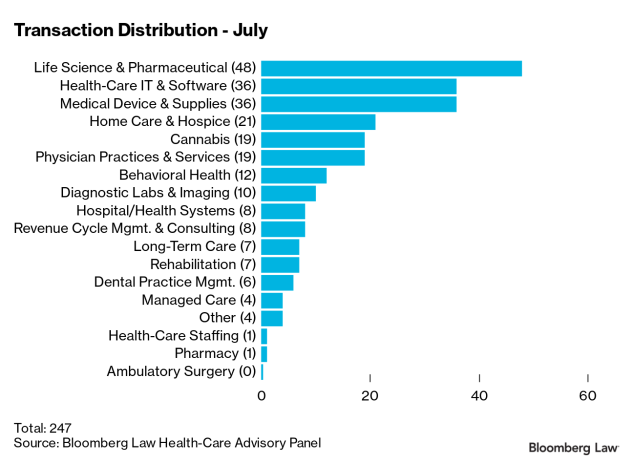 KPMG in Washington and FocalPoint Partners of Chicago prepared the curated year-to-date list and the list of select July transactions for Bloomberg Law.

The life sciences and pharmaceuticals sector continued to run hot in July, with 48 announced or closed deals for the month, and 300 for the year, Kocot said.

“With FDA granting full approval of the Pfizer-BioNTech COVID-19 vaccine earlier this month, new COVID-19 therapeutics on the horizon and administration of COVID-19 booster shots beginning next month, interest in the sector is expected to remain hot for the remainder of the year,” he said.

Health information technology and software had 36 announced and closed transactions in July, down from a record high of 50 in June. But rising Covid-19 case rates could increase interest in the sector by spurring demand for telehealth and renewing the focus on reaching patients in alternative care settings, Kocot said.

Medical devices and supplies also had 36 announced and closed deals in July, and interest is expected to remain high in coming months, said Ross White of KPMG in Washington.

Physician practices and services activity slowed in July, with 19 deals closed or announced, down from 26 in June, said Hector Torres of FocalPoint Partners in Chicago. But the number of deals was still significantly higher than last year, which saw just 6 in July. 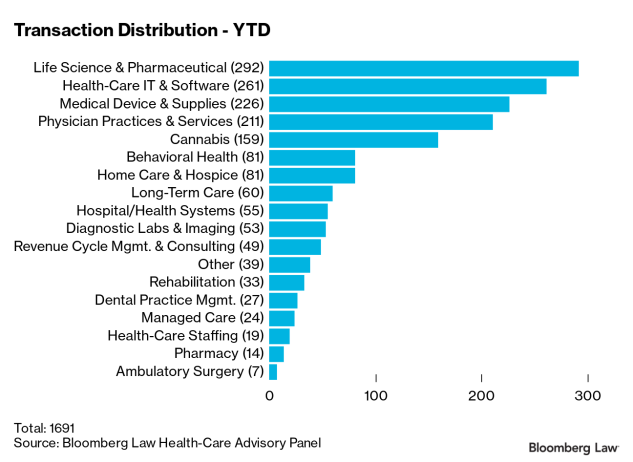 Transactions could exceed 100 in the third quarter of 2021 amid concern about a possible capital gains tax increase being pushed by the Biden administration, said of Epstein, Becker & Green in Newark, N.J.

Physicians are also looking for the security of being part of well-capitalized and professionally managed organizations, and to cash in on the market value of their practices, Herschman said.

Mergers and acquisitions within the infertility/reproductive-care sector continued to accelerate, with interest from both strategic and financial acquirers, including Webster Equity Partners, InTandem Capital Partners, Boston IVF, and Unified Women’s Healthcare. Interest should remain high as buyers look to expand and take advantage of factors that are increasing demand for fertility services, such as the increased age of women at childbirth, Torres said.

Unified Women’s Healthcare’s acquisition of CCRM, one of the largest providers of fertility related services in the U.S., is also significant, he said. The transaction adds 11 in vitro fertilization labs and 26 locations to the Unified network.

Home care and hospice deals continued to be on the upswing, with 21 deals in July, said Herschman.

Two factors helped spur activity in the sector: the goal of providing community-based care in the least costly setting, and the demand for home-based care for the elderly during the Covid-19 pandemic.

“We expect that the home-health sector will continue to be very active with regard to both smaller companies being acquired by larger regional organizations with sophisticated corporate infrastructure, and also national companies continuing to expand their overall revenues and geographic footprint,” Herschman said.

Eight hospital and health-system transactions were announced or closed in July, down from 12 in June and 10 in July 2020, said Torres.

The combination of Georgia-based Floyd Medical Center with North Carolina-based Atrium Health was a July highlight. The addition brings 62 Floyd locations and a flagship 304-bed facility to the Atrium network.

The $900 million deal includes $650 million in capital Atrium pledged for investment in Floyd over the next decade, $150 million for the new Floyd-Polk Healthcare Foundation, and retirement of Floyd’s outstanding debt, Torres said.

Deal volume in the cannabis sector remained strong in July, with 19 announced or closed transactions, said Zachary Taylor of Epstein, Becker & Green in Newark. The 2021 total has reached 159 transactions, almost double that of the same period of last year, which saw 85.

Deals took place in 12 different states and across the full-spectrum of services, including therapeutics, beauty, cultivation, manufacturing, and dispensing, he said.