Health-care mergers and acquisitions in February dipped to the lowest monthly level since November 2020 amid economic headwinds and uncertainty arising from the Russian invasion of Ukraine.

Rising inflation and interest rates, supply chain problems, and geopolitical uncertainty are leading many investors to take a pause from dealmaking, said Hector Torres of FocalPoint Partners in Chicago.

But despite the recent slowdown, many industry participants expect strong transaction volume in 2022, particularly by private equity firms that continue to raise and sit on record levels of funds, he said.

There were 186 announced or closed deals in February, down from 300 in December and 274 in January.

The life sciences and pharmaceuticals sector led the way with 35 announced and closed deals in the month, followed by health-care IT and software with 28 deals, physician practices and services with 22 deals, and medical devices with 22 deals.

“The real question is whether the slowdown in activity is a cautionary reaction of investors or the start of a longer trend in the overall deal market,” said Larry Kocot of KMPG in Washington.

KPMG in Washington and FocalPoint Partners of Chicago prepared the curated year-to-date list and list of select February transactions for Bloomberg Law. 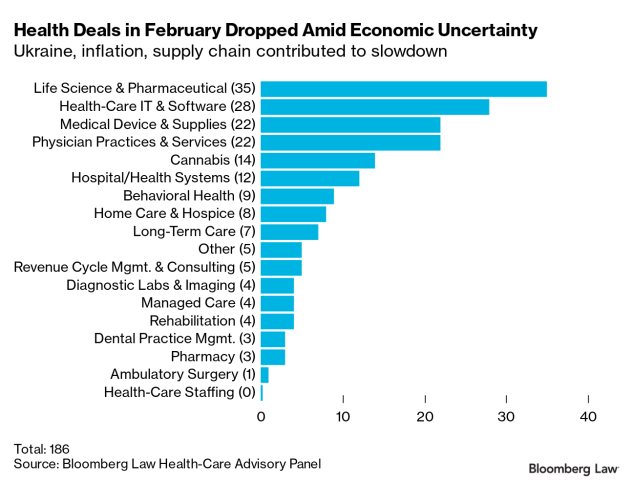 The 35 closed and announced deals in the life sciences sector in February outstripped the total from February 2021, but was below the monthly average from last year and lower than the January total of 46.

Pfizer-BioNTech and ’s requests for authorization of a second Covid-19 vaccine booster could drive additional vaccine purchasing, but Congress and the general public seem to be losing enthusiasm for more spending on Covid-19 preparedness, Kocot said.

“Covid-19 aside, the pharmaceutical pipeline is robust and pharmaceutical manufacturer capital is ready to be deployed for new investments in innovation,” he said. “This is a strong wind in the investment sails for the pharmaceutical sector, which may be enough to overcome the headwinds that are being felt in other subsectors of health-care and life sciences.”

The health IT and software sector continues to be among the most active sectors, said Anjana Patel of Epstein, Becker & Green in Newark. “All types of investors, strategic and private equity, continue to expand their portfolios by investing in IT companies that support the health-care industry,” she said. 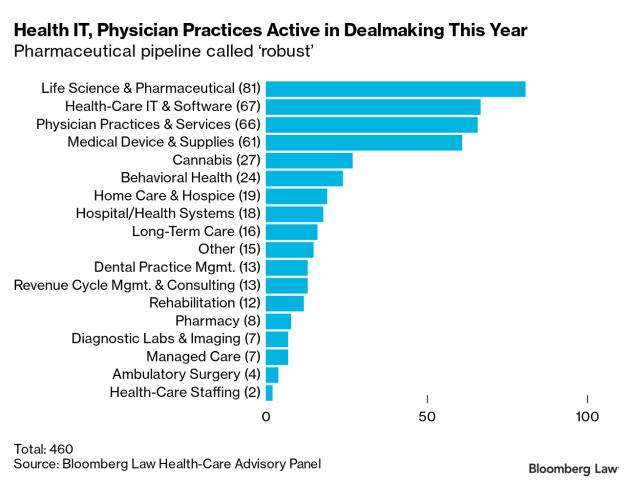 The physician practices and services sector has also remained active over the first two months of the year, said of Epstein Becker.

The most lively sub-specialties so far have been ophthalmology (15 deals), gastroenterology (7), dermatology (6), orthopedics (5), primary care (5), and women’s health (4).

“There also has been growing transaction activity among large cardiovascular groups, which we expect will continue to increase over the next six to 18 months,” Herschman said.

Hospitals and health systems enjoyed a rebound in February with 12 transactions, up from six in January, and on par with 14 in February last year.

The combination will create the largest health system in the state, with approximately 22 hospitals, 300 outpatient locations, and 64,000 employees.

The merger comes after recent deal-proposals have fallen through for Beaumont over concerns about the impact of hospital-system mergers on competition and prices, he said.

“The system had previously explored a merger with Illinois-based Advocate Aurora Health in 2020 in a deal that was nixed by Michigan lawmakers, and attempted an acquisition of Ohio-based Summa Health that fell flat as well,” Torres said.

Despite previous regulatory resistance to this transaction, its eventual approval and completion may serve as a catalyst to other hospitals and health systems exploring strategic alternatives, he said.

The cannabis sector also remained strong in February, said Timothy McHale of Epstein Becker. “Acceptance of cannabis, both medicinally and recreationally, is expanding rapidly throughout the country,” he said. “And with 14 cannabis transactions in the month, that makes 14 straight months that the sector has seen double-digit deal volume.”