Vice President Kamala Harris speaks at the 30th annual We Are EMILY National Conference and Gala in Washington, D.C., on May 3, 2022.
Photographer: Yuri Gripas/Abaca/Bloomberg

Vice President , in a fiery speech Tuesday night, accused Republicans of attacking women’s rights and called for Americans who support “self-determination” to stand with Democrats, following news that the Supreme Court is poised to strike down Roe v. Wade.

In her address, which was just over nine minutes long, Harris argued that a court decision to end the national right to abortion would open the door to the justices stripping away other rights, including same-sex marriage. She drew sharp contrasts with Republicans, who she said sought to limit the freedom of women and other Americans. 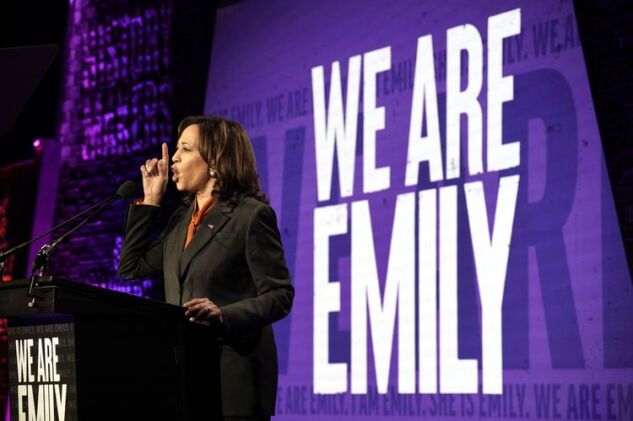 Kamala Harris at the 30th annual We Are EMILY National Conference and Gala in Washington, D.C., on May 3.
Photographer: Yuri Gripas/Abaca/Bloomberg

“If the court overturns Roe v. Wade, it will be a direct assault on freedom, on the fundamental rights of self-determination to which all Americans are entitled,” she said.

‘We Are Not Going Back’

Her speech represented the most robust defense of abortion rights so far from President ’s administration since the publication of a leaked draft Supreme Court ruling that would overturn Roe. The draft, written by Justice , was published by Politico, which reported that five justices -- all appointed by Republican presidents -- had already voted to overturn the 1973 abortion ruling.

The court said in a statement that the draft decision was authentic but not final.

Harris’s speech Tuesday to the Emily’s List annual conference was scheduled before the disclosure of the draft ruling. The group works to elect women who support abortion rights.

But the news elevated the vice president’s appearance, making the speech a potential watershed moment for Harris, the first woman and person of color to hold her office. As a candidate for president in 2020, she chastised other Democrats, including Biden, for not making abortion rights a more prominent issue.

Already, Democratic leaders have sought to rally their voters around the threat that abortion will soon be outlawed in many states. Midterm elections in November that will decide control of Congress had so far hinged on inflation, immigration, education and the coronavirus pandemic, and Biden’s party looked poised for defeat.

Changing the topic to abortion and women’s health may alter the political landscape, as polls have consistently shown a majority of Americans oppose overturning Roe.

Senator , a New Hampshire Democrat who Republicans are targeting for defeat in November, called the midterms “the most important election of our lifetimes” in her own speech Tuesday to the Emily’s List conference.

“On the ballot will be a woman’s fundamental right to be a full and equal citizen in our democracy,” Hassan said, according to prepared remarks. “The Republican men -- and yes, they are all men -- running against me are all pushing an extreme, anti-choice agenda. If elected to the Senate, they would ban abortion with no exceptions for rape or incest.”

The overturning of Roe v. Wade would be a generational milestone in America, immediately ending constitutional protections for abortion rights and triggering new laws and restrictions, particularly in conservative states. The ruling also would open the door to federal legislation curbing or eliminating access to abortion, which could curtail the procedure even in states where it remains broadly available.

Harris said that in 13 states, “women would lose access to abortion immediate and outright” if the court goes through with overturning Roe.

Harris’s speech was her first since recovering from Covid-19. It’s sure to be parsed by party faithful, including liberals who have demanded that Democrats take far more aggressive action to ensure access to abortion, including by expanding the size of the Supreme Court or eliminating Senate rules that require 60 votes to overcome a filibuster.

Democrats presently don’t have the votes either to add justices to the court or to enshrine the protections of Roe in U.S. statute.

Harris called on allied Americans to “link arms in this fight. If you stand for freedom, for self-determination, for the right to privacy, if you stand for these principles, stand with us.”

“Let us fight for our country, and for the principles upon which it was founded, and let us fight with everything we have got,” she said.