The findings follow an announcement by the Centers for Disease Control and Prevention that fully vaccinated people can ditch their masks in most settings. Federal officials touted the decision as a major step toward a return to normalcy as cases dropped and vaccinations rose. The White House also said the change could provide an incentive for more Americans to get inoculated.

Many people have been vaccinated since that survey took place. Liz Hamel, vice president and director of public opinion and survey research at KFF, said she wouldn’t rely as much on the number of respondents that say they’ve gotten a vaccine.

“But I think what stands out is the share that say they definitely won’t get the vaccine among those who say they don’t wear masks,” Hamel said in an interview. 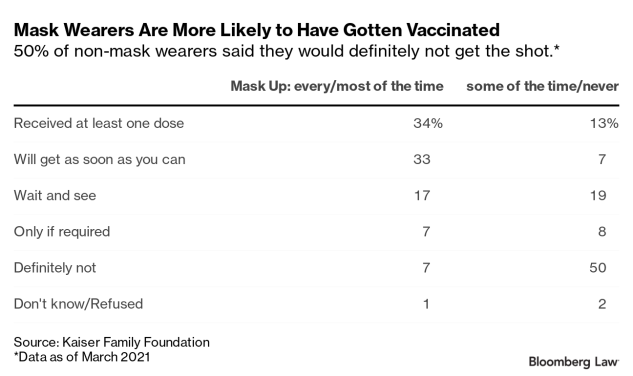 The findings already indicate that people who say they don’t want the vaccine are much less likely to believe that masks are effective. “And so certainly that relationship between the attitudes towards the vaccine and attitudes towards other sorts of protective measures exist, particularly among that group that says they’re just definitely not going to get vaccinated,” she said.

The CDC’s decision spurred confusion that left individuals and businesses unsure about how to proceed. It also drew concerns that employers will have to ultimately rely on an honor system, potentially leading to greater risks for grocery stores and other retailers.

CDC Director Rochelle Walensky noted that the new guidance was a key first step but that states, local jurisdictions, and individual businesses can continue to implement their own mask mandates if they have concerns—especially if there are higher case counts or a lower percentage of vaccinations in their area.

Anyone who hasn’t been vaccinated still needs to continue to wear a mask, especially indoors, and practice other public health interventions such as social distancing.

KFF, which has been running polling data through its Covid-19 Vaccine Monitor, ran data on vaccination intention based on self-reported masking behavior and people’s belief in whether wearing a mask prevents the spread of Covid-19.

The foundation has been running surveys since December 2020, and has seen an increasing number of people who were on the fence about the vaccine get inoculated. But the number of people who say they definitely don’t want a Covid-19 vaccine has remained stable at 13% to 15%.