A fast-approaching enrollment tipping point for Medicare managed care plans is increasing the urgency for Congress and the HHS to resolve payment issues that threaten the viability and cost-effectiveness of the popular coverage option.

Medicare Advantage plans were paid $350 billion in taxpayer funding in 2021, and now cover nearly 46%, or more than 29.7 million, of Medicare’s 64.6 million beneficiaries. MA plan enrollment is expected to hit 31.8 million next year. In the near future, a majority of Medicare beneficiaries are expected to receive their benefits through MA plans, rather than through traditional fee-for-service Medicare.

That coverage milestone has broad implications for Medicare’s future and its troubled finances. In their 37-year history, private Medicare managed care plans have never produced aggregate savings for the program, the Medicare Payment Advisory Commission reported.

Yet MA plans enjoy bipartisan support from Congress, are popular with beneficiaries, and are flooding the airwaves with ads seeking new members as Medicare’s fall enrollment period gets underway. Major MA plan providers include UnitedHealthcare, Humana, Anthem, CIGNA, and Centene.

With overall Medicare spending projected to jump from about $850 billion last year to $1.8 trillion in 2031—and Medicare’s Hospital Insurance Trust Fund facing insolvency in 2028—the commission is pushing to rein in excess payments to MA plans, before they become the program’s dominant coverage vehicle.

Failure to do so jeopardizes the long-term solvency of Medicare as it braces for a wave of program-eligible baby boomers, a shrinking employee tax base, persistent medical inflation, and higher utilization of services.

“As MA is a bigger and bigger part of the budget, the effects of overpaying MA increase. And the difficulty of doing anything about it increases because the political influence of MA plans grow, and because more and more beneficiaries are benefiting from the overpayments,” said Richard Kronick, professor of public health at the University of California, San Diego.

Driving Up Costs in Traditional Medicare

In addition to depleting more quickly the trust fund that finances hospital care in traditional Medicare, MA overpayments also swell the federal deficit and drive up costs for beneficiaries, who pay for 25% of the cost for Medicare’s “Part B” coverage, Kronick said.

“As MA plans get paid more than they should, the cost of Part B goes up more than it should. And beneficiaries pay for part of that as well,” he said.

Profit margins for MA plans averaged 6.5% in 2020, the commission found. That’s higher than average margins for commercial insurers and Medicaid managed-care plans, said Bowen Garrett, an economist in the Health Policy Center at the Urban Institute.

This year the average MA plan bid to provide both inpatient “Part A” hospital benefits and outpatient “Part B” benefits was 15% less than what it would cost under traditional, fee-for-service Medicare, according to the commission. But MA plans are paid 4% more per beneficiary than for similar enrollees in traditional Medicare. 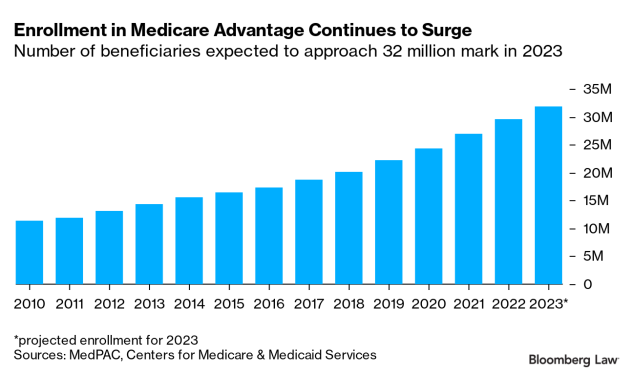 In its 2022 March report to Congress, the Medicare advisory commission laid out a wish list for Congress and the HHS to to address “deeply flawed” Medicare Advantage payment policies.

“In particular, coding intensity inflates payments to MA plans and undermines the goal of plans competing to improve quality and reduce health care costs; the quality bonus program boosts plan payments for nearly all enrollees but does not meaningfully reflect plan quality, from the perspective of enrollees or the Medicare program; and MA benchmarks are set at an abundantly high level such that the government subsidizes MA plans’ substantial and ever-higher levels of extra benefits for MA enrollees,” the commission report said.

Addressing each of these issues would “stem Medicare’s excess payments to MA plans, helping to preserve Medicare’s solvency and sustainability, while maintaining beneficiary access to MA plans and the extra benefits they can provide. It is imperative that the Congress and the Secretary make such policy improvements,” the commission said earlier this year.

The commission, an independent congressional agency established by the Balanced Budget Act of 1997, advises Congress on the Medicare program. Lawmakers may or may not follow the commission’s recommendations.

Congress recently moved quickly to require greater transparency and more timely coverage decisions by Medicare Advantage plans. But lawmakers have been reluctant to decrease MA plan funding that could potentially reduce benefits or raise premiums for enrollees. “And we are ready to protect the program from policies that would undermine this stability or the health outcomes of enrollees,” House members said in a letter to Chiquita Brooks-LaSure, administrator of the Centers for Medicare & Medicaid Services.

“You could argue that MA plans have been able to find some efficiencies in delivering care. That the beneficiaries are benefiting from the additional benefits. But any savings are not accruing to the Medicare program. The payments are higher than they would be for comparable enrollees in traditional Medicare,” Garrett said.

While its cost-effectiveness is debatable, Medicare Advantage has been a success for making enhanced coverage more affordable for low-income and minority beneficiaries, said Gail Wilensky, a health-care economist and former commission chair. “That’s no small deal,” she said.

Unlike fee-for-service Medicare, which pays for each medical service provided, MA plans receive a flat monthly payment to cover each beneficiary’s cost of care. The payments are based on a beneficiary’s health risk factors, which are used to calculate their individual “risk score.”

Risk scores reflect a patient’s projected cost of care and are partly based on the diagnoses that providers list, or “code.” That gives MA plans a financial incentive to have providers record all possible diagnoses. This “coding intensity” increases risk scores and provides higher payments to MA plans. It also increases the amount of rebates that plans use to fund extra benefits, like vision and dental coverage.

The CMS imposes a 5.9% reduction to MA risk scores to offset the effect of coding intensity. But even with the reduction, excess payments to MA plans still totaled nearly $12 billion in 2020, the commission reported in its 2022 March report to Congress. While the 5.9% reduction is the minimum required by federal law, the CMS has never imposed a larger one.

In a March letter to Brooks La-Sure, the commission said the inadequate CMS coding adjustment had inflated MA plan payments by more than $91 billion between 2007 and 2022. And if CMS follows through with plans to use the same 5.9% minimum adjustment in 2023, “we estimate that Medicare spending for coding intensity will rise by $16.2 billion,” next year.

“We urge the Secretary and CMS to increase the coding intensity adjustment to more fully reflect the magnitude of this excess spending,” the commission wrote.

In a statement, the CMS said it continually reviews MA coding patterns, along with how the adjustment is calculated, how best to apply it, and what the appropriate level should be. Stakeholders have recommended the agency apply a higher coding adjustment and that the CMS consider approaches that take into account differences in coding patterns across MA plans.

The CMS said it will consider these recommendations in developing future proposals for the coding intensity adjustment. But the 5.9% adjustment will apply in 2023. The 2024 coding adjustment is expected to be finalized by April 3, 2023.

Medicare would save $600 billion in MA payments from 2023-2031 if the CMS set the coding intensity adjustment to a higher “empirically justified level,” of about 17% “rather than remaining at the statutory minimum” of 5.9%, according to a 2021 study co-authored by Kronick.

Action by CMS or Congress?

A former director of the Agency for Healthcare Research and Quality at the HHS, Kronick said he believes most intense coding by MA plans should be expected, given the incentives. Rather than the CMS just increasing the adjustment, Kronick said Congress should develop a better method for calculating coding intensity and require the agency to use that method.

Wilensky said it makes more sense “to have Congress direct CMS” to do a sample-size check of MA encounter data, report the findings to Congress, get an assessment by GAO—and then set the coding intensity adjustment based on these findings.

“This ought to be determined empirically, what is the appropriate number,” said Wilensky, who also served as Medicare administrator under President George H.W. Bush. “It’s not a decision to be made in the abstract.”

To contact the editor responsible for this story: at bbierman@bloomberglaw.com