Lawmakers are urging Medicare to do more to help curb the abuse of opioids, such as Purdue Pharma’s OxyContin, among the program’s beneficiaries.
George Frey/Bloomberg via Getty Images

A surge in opioid-related settlements targeting individual physicians in 2018 is likely to continue as the government uses a law targeting false claims to fight the nationwide opioid abuse crisis.

The government recovered over $4.6 million from five individuals involved in opioid fraud in fiscal year 2018 under the False Claims Act, according to Bloomberg Law Data Analytics Manager Christina Brady and Analysis Manager Betsy Mountenay. Only two opioid-related FCA settlements with individuals occurred from 2014 through 2017.

Brady added, “Although these settlements make up a small fraction of the government’s total recovery for 2018, they are large enough to send a warning to individual providers.”

“Providers prescribing and distributing opioids are on notice that their actions will be watched closely, and it’s essential that they remain up to date on current laws, monitor prescribing practices, and report any diversion promptly,” Anna Grizzle, a health-care fraud and compliance attorney with Bass, Berry and Sims Plc’s Nashville, Tenn., office, told Bloomberg Law.

The shift toward more individual opioid fraud enforcement can also be seen in data from the 2018 national health-care fraud takedown, an annual summer event in which the Justice Department unveils nationwide health-care fraud charges levied on a single day.

The June 2018 takedown showcased charges against 162 individuals for allegedly participating in schemes to fraudulently prescribe and distribute opioids, out of a total of charges filed against 601 people.

FCA settlements have traditionally targeted companies, not individual doctors, and have largely steered clear of opioid fraud. The FCA imposes heavy financial penalties on companies or individuals who defraud the government. 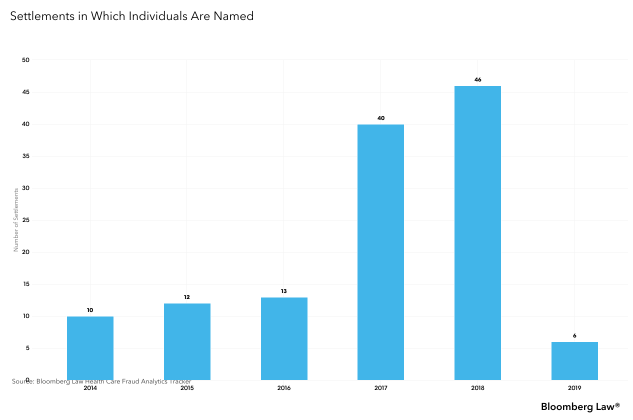 The Appalachian Task Force was announced in October and includes representatives from the DOJ, the Federal Bureau of Investigation, the HHS Office of Inspector General, and the Drug Enforcement Administration.

The task force will go after opioid fraud in Ohio, Kentucky, West Virginia, Tennessee, and Alabama.