Former U.S. Secretary of Defense said he believed in founder so much that he not only became a board member but also invested a “significant” amount of his own money into the company before it failed.

The retired four-star general testified Wednesday that he admired Holmes and was captivated by her promise to revolutionize blood testing, only to be disappointed later when the shortcomings of the Silicon Valley startup’s technology were revealed.

“There became a point when I didn’t know what to believe about Theranos anymore,” he said. “Looking back now I’m disappointed in the level of transparency.”

He said his early enthusiasm led him in 2013 to join the company board, which was studded with other luminaries, and to put $85,000 of his own money into Theranos because he wanted some “skin in the game.” 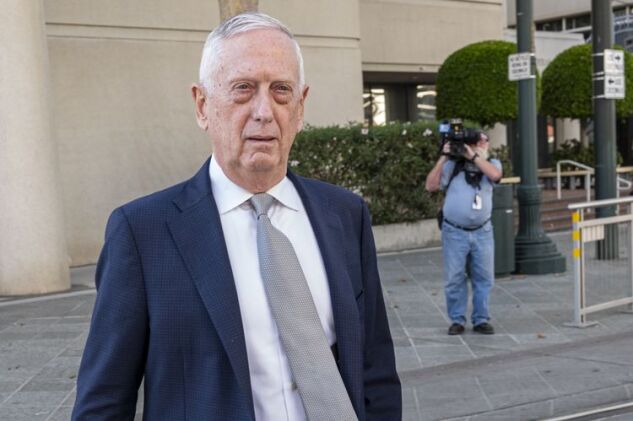 Holmes is accused of bilking more than $700 million from investors in Theranos, which was once valued at $9 billion before media exposes and regulatory probes reduced the company to virtual rubble. Mattis was asked by a prosecutor if his investment was “significant.”

“For someone who’d been in government service for 40 years, yes,” Mattis said.

Asked how he made the choice to invest, Mattis said Holmes was the “sole source” of his information.

Mattis, who headed the armed forces under former President Donald Trump, is among several high-profile witnesses expected to be called by the government for Holmes’s trial. Former Secretary of State , who was also on Theranos’s board, may testify as well as investors including News Corp. Chairman .

Holmes is charged with lying to investors and patients about the capabilities of Theranos machines and the company’s financial health and faces as long as 20 years in prison if convicted. She has pleaded not guilty. The trial in San Jose, California, is expected to run through December.

Mattis started out by telling jurors that Holmes came across as “sharp, articulate, committed” when he first met her about a decade ago, before he joined the board.

“I was backstage for a speech I was going to give” in San Francisco when Holmes pricked his finger for a blood test, he said. “I believe that’s when I first saw the machine, a box-like device,” Mattis testified.

“I’d been rather taken with the idea of just one drop of blood in a remote” area to test for a broad array of problems, Mattis said. It could be most helpful in triage “if it could do what she said she could do.”

The general was questioned about a Theranos board meeting he attended in October 2013 at which Holmes delivered an upbeat report on the company’s technology. A prosecutor asked if he knew then that the company was routinely relying on blood analyzers manufactured by other companies -- as other witnesses have testified.

“It would’ve tempered my enthusiasm significantly,” Mattis said, adding that he took it on Holmes’s “good faith” that the Theranos analyzers “could deliver a lot of capability.”

In 2011, Mattis had committed to helping Holmes get Theranos machines introduced as a “pilot project” in military use. “I was trying to get the military side to open the door,” he testified. “It was something I didn’t want to have people go to sleep on and not take advantage of it.”

But it was never relied on by soldiers or officially deployed “in theater,” Mattis said, describing the process as getting tied up in bureaucracy. Prosecutors have told the jury Holmes made “grandiose” claims starting in 2009 that Theranos machines were deployed by the military.

Mattis said he wasn’t aware of Theranos analyzers ever being actively used on military helicopters or to provide medical assistance to soldiers in clandestine operations.

“I’m not aware of it,” he said repeatedly when questioned by a prosecutor.

By early 2016, Mattis said, he was struggling with his instinct to support Holmes given his misgivings after revelations about the technology -- and Holmes’s equivocation in response. Shortly afterwards, his support evaporated.

“I couldn’t see why we were being surprised on such fundamental issues,” he told the jury.

, a lawyer for Holmes, tried to soften the blow of Mattis’s testimony by getting the general to acknowledge under cross-examination that he wasn’t in a position to evaluate Theranos technology because he didn’t have a scientific or engineering background.

In various questions from Downey about his service on the board, Mattis displayed a deep interest and involvement in Theranos. But the former commander of U.S. Central Command covering the Middle East struggled to remember a few details.

“We might’ve had a few things going in the Mid-East at the time,” Mattis said to laughter in the courtroom.