Nurses prepare their personal protective equipment before tending to a patient inside the Covid-19 unit of Salinas Valley Memorial Hospital in Salinas, Calif.
Photographer: Nic Coury/Bloomberg via Getty Images

An interview is the only thing standing in the way of 10,000 qualified and vetted foreign nurses coming to the U.S. to palliate the crumbling health-care system.

These nurses seeking permanent residency have passed a licensure exam, submitted paperwork, and accepted jobs in the U.S., but they’re stuck in a holding pattern because of a bottleneck at that last stage of visa processing that requires an interview at the U.S. consulate in an applicant’s country of origin.

The pandemic has caused burned out younger nurses to leave the industry, older nurses to retire, and employees to use sick leave at higher rates, said Blair Childs, senior vice president of public affairs at the health-care industry consulting firm Premier Inc. Addressing the backlogs “is the one thing that could be done in the short-term that would at least provide some relief,” Childs said.

Eighteen months of flooded health-care facilities have underlined the urgency for international health-care workers to fill workforce needs, but there’s been little progress addressing their barriers to employment in the U.S.

Limited capacity at U.S. consulates abroad, green-card backlogs, and licensing restrictions have all constrained the ability of health-care workers to fill those in-demand jobs. The shortage of health-care workers, meanwhile, is only expected to grow in the coming years as the U.S. population ages.

“Surgeons are having their operating time cut back because there’s no nurses to support them in the operating room and no nurses to man the recovery room,” said Ron Hoppe, chief executive officer of international recruitment firm WorldWide HealthStaff Solutions. The shortage is most acute in the nursing industry, which represents the largest piece of the health-care workforce, but ripples through other medical jobs as well, Hoppe said.

If the government doesn’t address the staffing shortage, “the natural consequence is decreased access to care and dramatically rising costs—it’s high school supply and demand economics,” he said. “All available evidence and the real experiences of providers on the ground is screaming for more doctors and more nurses.”

The pandemic has slowed the processing of both immigrant and nonimmigrant visa applications in embassies and consulates across the globe. “The front end of the visa processing system seems to be working well, but there’s this massive and growing bottleneck at the end of the process,” Hoppe said.

The impact on immigration varies in each country based on Covid-19 related travel restrictions, quarantine regulations, and other virus mitigation measures, a State Department official said.

The State department is working on reducing the “significant backlog” and has authorized consulates to treat the cases of health-care workers who will be involved in pandemic response as “emergencies,” the official said. But this has caused little movement.

Advocates have called on the Biden administration to make it easier for health-care workers to get through the immigration backlog. One option would be to scrap the interview process at consulates, which is mostly just a formality.

“These are all qualified nurses that are sitting abroad just waiting” and have already been vetted by their future employers, said Marketa Lindt, a partner at Sidley Austin LLP’s office in Chicago who works on labor, employment, and immigration issues.

The U.S. is in dire need of more nurses in particular. The demand for nurses will grow at least 5% in the next five years, but more than 900,000 will leave the profession for good, according to a projection from the global advisory firm, Mercer, a unit of Marsh McLennan. That means facilities will need to hire over a million nurses by 2026, and 29 states will most likely not be able to meet demand. 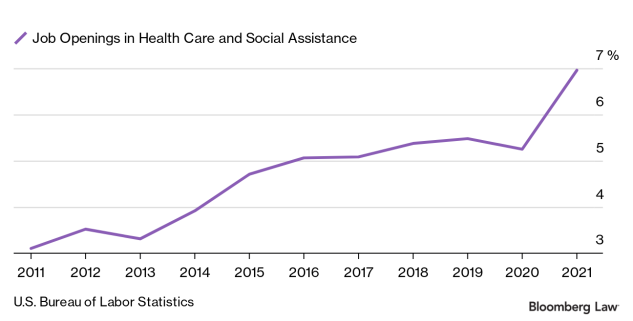 There are enough Americans who want to be nurses, said Bruce Morrison, a former congressman and lobbyist for the American Hospital Association. Morrison is a former chairman of the House Immigration Subcommittee and authored the Immigration Act of 1990. The problem is that “we don’t train enough,” Morrison said.

Nursing schools have to turn away qualified applicants because they have limited resources like faculty willing to teach, said Robyn Begley, chief executive officer of the American Organization for Nursing Leadership and chief nursing officer and senior vice president for workforce at the AHA. “We can’t provide health care and services to our communities without our workforce.”

To supplement the domestic workforce, the U.S. has turned to foreign health-care workers for decades. They made up 15.5% of the nursing workforce as of 2018, and overwhelmingly come from the Philippines and other parts of Asia. But there’s a substantial number of international health care professionals already in the U.S. who face their own barriers to employment.

Physicians with work authorization are limited in the locations they can practice through employer-sponsored work visas. And tens of thousands of other individuals with medical training aren’t able to practice because of residency or state licensing requirements.

Those restrictions mean roughly 263,000 health professionals workers already in the U.S. remain on the sidelines during a health care crisis.

Among those workers is Lubab al-Quraishi, an Iraqi physician who practiced as a pathologist for 10 years in her home country before relocating to the U.S. with refugee status in 2014.

“This is a waste of talent,” said al-Quraishi, works as a pathologist’s assistant in a New Jersey medical lab because residency requirements prevent her working as a medical doctor in the U.S.

For al-Quraishi, the executive order allowed her to practice medicine for the first time since coming to the U.S. She treated patients in field hospitals and in nursing homes in the state until the license expired in February.

“It still feels amazing to be recognized and to be able to go back to work,” she said. “At the same time, it feels bitter not to be able to do that again.”

Health-care workers typically come to the U.S. via employment-based green cards offering permanent residency. This is the slowest kind of visa to get, even in pre-pandemic times, said Yova Borovska, counsel at immigration law firm Buchanan Ingersoll & Rooney PC. in Tampa, Fla.

Foreign physicians are able to come to come to the U.S. through a limited number of J-1 medical education or employer sponsored H-1B visas for highly skilled workers. Those shorter-term options aren’t available to nurses because of higher educational requirements, meaning they must apply for employment-based green cards. And per-country caps on the number of green cards awarded have driven up wait times for physicians and nurses to come to the U.S. or get permanent work authorization after arriving.

Mushtaq Bhat, an internal medicine physician originally from India, holds an H-1B visa. He’s one of thousands of foreign health professionals whose visa status leaves tenuous their long-term status in the country.

Bhat treated scores of Covid-19 patients as his Dallas-area hospital experienced the worst waves of the pandemic earlier this year and eventually contracted the virus himself. The potential effects falling ill could have on this family’s residency status were never far from his mind, he said.

“That was the one worry on my mind,” he said. “If something happens to me, what will happen to my family? Within a month, they become illegal here.”

To contact the editors responsible for this story: at csaenz@bloombergindustry.com; at aharris@bloomberglaw.com