founder has good reason to root against her former boyfriend when he takes his turn at trial.

And it has nothing to do with how she feels about the man she claims her for years. Rather, a guilty verdict for company ex-president might help Holmes get a break on a prison sentence that could easily be more than a decade.

The former chief executive officer’s attempts to shift blame on Balwani for the blood-testing startup’s collapse failed to stop jurors from finding her guilty in January of defrauding investors.

But Holmes will get another chance to argue that the Silicon Valley businessman was a bad influence on her when U.S. District Judge -- who’s overseeing Balwani’s trial after presiding over hers -- hears arguments ahead of her sentencing in September.

That’s why Balwani’s trial, which begins Wednesday with jury selection, is crucial.

Any new information that comes out pointing to him as the mastermind of the Theranos fraud improves Holmes’s chances of getting at least a modest reduction in a prison term that could range anywhere from about nine years to double that amount, according to criminal defense attorneys not involved in the case.

“She will want evidence to show that he was the force behind everything, a master manipulator, a bad man,” said , a white-collar criminal defense lawyer at Coblentz Patch Duffy & Bass. “That could play into her theory that he manipulated her.” 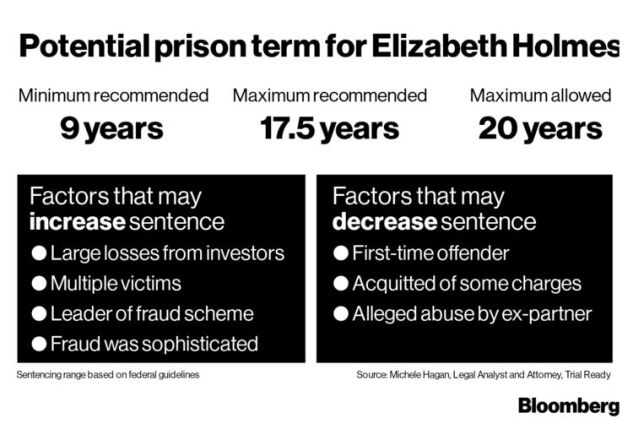 Balwani became a subject of intense focus at Holmes’s trial as she accused him of emotional and sexual abuse. Holmes told jurors that the Silicon Valley businessman who became her second-in-command in 2009 tightly controlled how she and the blood-testing startup were propelled to celebrity and a valuation of $9 billion before it shut in 2018.

It will be Davila’s task to size up the dynamics between the pair before he metes out Holmes’s punishment.

“It’s not enough if he loses,” Crudo said of Balwani. “That he is a bad apple doesn’t necessarily make her any less of one.”

Holmes laid the foundation to seek sympathy from Davila when she tearfully testified at her trial in November that Balwani, twice her age, courted her at a vulnerable moment after she’d been raped as a Stanford University undergraduate and went on to inflict emotional and sexual abuse on her for a decade.

The judge will get recommendations from the federal probation office and prosecutors about how much time they think Holmes should serve. Her lawyers will likely argue that while Balwani’s influence “does not excuse her conduct, it provides important context, it is a mitigating factor” justifying a lower sentence, said Andrey Spektor, a lawyer at Bryan Cave Leighton Paisner LLP.

“It also could be used to show that Ms. Holmes suffered during her Theranos experience -- that it wasn’t all glitz and glamor, and she therefore doesn’t need a particularly long sentence to be punished or to be deterred,” Spektor said.

Government witnesses called at Balwani’s trial aren’t expected to revisit Holmes’s abuse allegations - - or to undermine any of the evidence at her trial that she was the ultimate decision maker at Theranos as its CEO. But they are likely to be questioned about Balwani’s management style and any character flaws that would explain his culpability.

Legal experts say Holmes is unlikely to testify, though she has been listed as a potential witness. Balwani didn’t testify at her trial.

To fashion a sentence for Holmes, Davila will start by determining the longest possible prison term she might serve. The judge will have to parse for himself, anew, Holmes’s argument that Balwani’s abuse might explain her failings, said Nanci Clarence, a white-collar defense attorney at Clarence Dyer & Cohen LLP. And then cut it down to a size commensurate with his view of the crime and her culpability.

The alleged abuse by Balwani “could help explain lapses in judgment,” Clarence said. Her lawyers will be “looking for any fact they can glean” from his trial that might be used to reduce her sentence, she said.

In calculating prison terms, judges rely on federal guidelines as a benchmark. For Holmes, the staggering sum of money investors lost in Theranos is the primary driver of the steep sentence she faces, said Seth Kretzer, a criminal defense lawyer at Kretzer & Volberding PC.

In one count alone, Holmes was convicted of of $100 million, which calls for a sentence under the guidelines ranging from nine years to slightly more than 11 years.

“I don’t see her route to a low sentence here,” Kretzer said. “He has to give her a huge break just to get down to a 10-year sentence,” he said, referring to Davila. “And it wouldn’t take creative lawyering to get a lot higher.”

Two more investor fraud counts Holmes was found guilty of add up to $44 million in losses -- not enough to bump her up to the next level of incarceration for that offense. But other “aggravating” factors, including that Holmes arguably led the fraud as the startup’s CEO, could add years to her sentence, Kretzer said.

To estimate how much time Holmes might end up spending in prison, Michele Hagan, a former California prosecutor, studied 11 fraud cases Davila has handled. Based on that review, she believes Holmes faces a sentence ranging from about nine years to 17 1/2 years. The final outcome depends in large part on what Davila learns from Balwani’s trial over the next few months, she said.

“We still don’t know what evidence is going to come out in Balwani’s case,” Hagan said. It will reveal whether Holmes “was more involved than we know -- or less involved.”