Pharmaceutical companies are turning to a fast-moving but rarely used patent office process to undercut their competitors’ intellectual property.

Drugmakers, in a slow but steady trend, are considering post-grant reviews, a Patent and Trademark Office trial proceeding where a wide array of challenges can be brought against rivals’ drug patents.

The number of post-grant reviews challenging standard drug and biologic patents rose from just one in 2014 to 10 in the first half of 2021.

For companies that closely watch their competition, post-grant reviews present an effective way to narrow the number of patents they have to clear to get a product to market. That is especially true since case law has evolved to favor challenges that can’t be brought under the PTO’s more popular inter partes review process.

“PGRs can be brought quickly, so if a patent is important, it’s a chance to resolve questions about its validity early in the product cycle,” Joseph Matal, a partner at Haynes and Boone LLP, said.

Challengers could wait to raise invalidity as a defense once they are sued in federal court, but juries typically lack the technical expertise found on the Patent Trial and Appeal Board, the administrative tribunal that hears patent challenges at the PTO.

Drug cases raise “pretty sophisticated, tricky issues that are very heavy in science expert testimony” and better put before a panel of scientist-judges than a jury, Blaine M. Hackman of Dechert LLP said.

“It’s not so much that there’s a story as much as just the nitty-gritty of how hard it is to practice the full scope of the claims,” he said.

In 2011, Congress revamped the patent system with the America Invents Act, creating the post-grant review and inter partes review processes.

Post-grant reviews faced limits from the get-go. They could only be sought within nine months of a patent being granted and only to patents issued after March 16, 2013—putting the process off limits for challengers in the AIA’s early years. By contrast, inter partes reviews can typically be brought any time after that nine-month time frame. 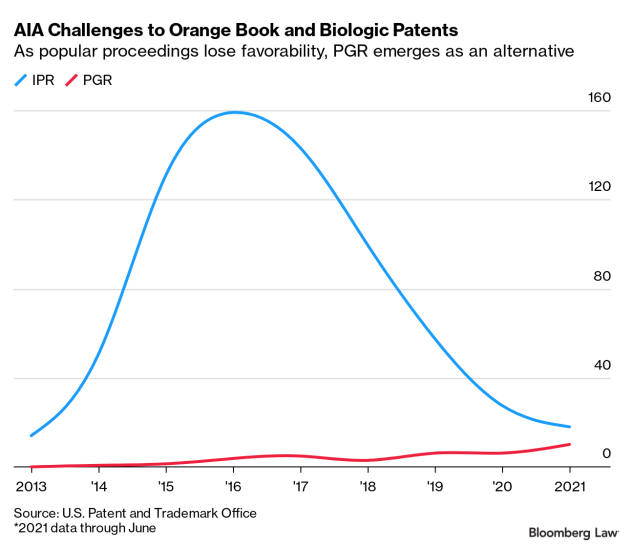 Recent U.S. Court of Appeals for the Federal Circuit cases have strengthened arguments for invalidating drug patents in two areas—written description and enablement—allowed in post-grant review but not in inter partes review. For example, in Amgen v. Sanofi, the court in February held that a trial court was correct to invalidate claims in two patents for Amgen Inc.'s Repatha cholesterol drug for lack of enablement because the scope of those claims was too broad.

In IPRs, challengers are limited to arguing their rivals’ patents were too obvious or anticipated by previous inventions or published documents—called prior art—to secure patent protections. But in PGRs, arguments over whether a patent adequately explains how to make and use the invention—a requirement known as enablement—or whether the patent clearly describes the technology, referred to as written description, are fair game.

That may make PGRs even more attractive to drug companies, meaning there could be “some substitution effect” for IPRs, Melissa Wasserman, a University of Texas at Austin law professor who focuses on patents, said.

“I believe there was some pent-up demand for IPR,” she said. “Once the initial wave of low quality patents were challenged in IPRs, then it is not surprising to see a decrease in utilization over time.”

That is leading petitioners to use them “as the hammer to bring down on people with broad claims in the biotech space,” he said.

One drawback to the PGR process is that it requires a challenger to closely watch a rival’s patent applications to be ready to file a PGR within nine months of the patent issuing. That’s only going to be the case with competitors who are “watching each other 24/7,” Sarah Chapin Columbia, a partner at McDermott Will & Emery, said.

“If you see a competitor who is trying to extend their patent protection beyond what you think is appropriate, you can try to nip that in the bud rather than be in a situation where you might be up against a lawsuit or a preliminary injunction preventing your product from going on the market,” she said.

Dechert LLP partner Katherine Helm said biosimilar applicants might know the field long before they are sued under the 2009 Biologics Price Competition and Innovation Act, a law passed as part of the Affordable Care Act that created an abbreviated pathway for biosimilar approvals. Post-grant reviews could allow them “to narrow or reduce the number of patents that could potentially be litigated,” she said.

Smaller biopharma companies going up against early patents in the field may be particularly interested in taking advantage of PGRs, Lendaris said. “They need to get funding, and so they have to clear that patent so that their investors will think that they can actually come to market with their product.”

Time is of the essence, as companies would be disadvantaged by waiting until their product is ready before trying to knock out a patent “licensed to a big pharma company that could smash them,” Lendaris said. “They need to clear that patent early, and that this could be an effective way of doing that.”

The flip side is that bringing a PGR doesn’t make sense if you aren’t head-to-head competitors on the brink of a fight, Baker Botts partner Stephen M. Hash said.

“You’re painting a target on your back, because why would you be filing it if you didn’t believe you infringed?” he said. “If the other side doesn’t know about you, you are lighting a big bonfire for them to see.”

A big one is the estoppel effect: a party that files a post-grant review is barred from raising any validity argument in district court that it could have made at the patent office. The broad scope of PGR makes it riskier than inter partes review estoppel, as IPR only covers prior art defenses.

Bernard Chao, a professor at the University of Denver Sturm College of Law, also questioned the value of knocking out a patent or two for certain drugs, particularly those protected by dozens of patents.

Asking the PTAB to reconsider a patent’s validity is done on a case-by-case basis and can prove a costly process for cutting down a thicket, Chao said. If a drugmaker spends around a million dollars to kill a single patent, they may have to take down dozens more for an easier entry into the marketplace.

“You really just have to have all your ducks in a row about all the positions you want to assert, which is really difficult,” she said.

Still, PGRs are a more “streamlined” process to invalidate patents as they are the only post-grant proceeding where companies can challenge a patent on any patentability requirement, Wasserman said.

“This could have an effect of clearing out invalid patents and allowing generics to enter the market earlier,” she said.