The White House is asking Democrats to move forward with a sweeping domestic spending package that drops two of its major, and contentious, health policy goals: empowering the government to lower drug prices and adding dental benefits to Medicare.

Key Democrats responded by saying the issue remains live, acknowledging the party has yet to reach consensus.

“We’re still trying to get drug pricing included in the bill,” (D-N.J.), chair of the House Energy and Commerce Committee, told reporters.

The framework omits major drug pricing changes Democrats have debated for months, namely allowing the government to negotiate with drugmakers for lower costs or caps on drug price increases. It does call for saving the government $145 billion by repealing a Trump-era regulation that would have limited drug rebates. That regulation was never put in place. 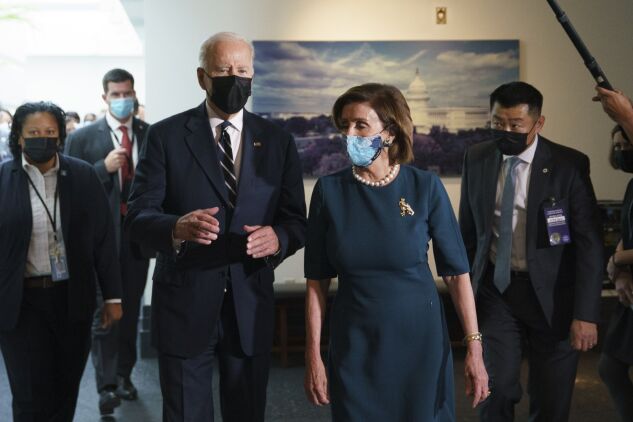 Sen. (D-Ariz.) reached an agreement with Biden ahead of Thursday’s framework announcement on a drug price negotiation bill that’s far narrower than what’s been proposed for the domestic policy package, according to a source familiar with the discussion.

That agreement mimics a bill backed by Rep. (D-Calif.), a Sinema ally, that would limit negotiations to just drugs in Medicare Part B, the outpatient service, that aren’t under patent protections.

Sinema’s deal may not have much traction with her Democratic colleagues. A Biden administration official told reporters Thursday there isn’t enough agreement among Democrats on drug price negotiation to include it in the framework.

Two House aides, one a senior staffer on the Energy and Commerce Committee, said House leaders weren’t briefed on a deal between Sinema and Biden ahead of the announcement of the framework. Both said they don’t think this narrower drug pricing package could pass the House.

Other key senators said agreements with the White House and moderates such as Sinema and (D-W.Va.) don’t guarantee the legislation can pass Congress.

“A framework is not a final product as far as I’m concerned,” Sen. (D-N.J.) said. “The administration may have negotiated with Senator Sinema and Manchin, but they’ve got to get 48 other votes.”

What’s in the Framework

Biden’s proposed framework includes extending expanded insurance subsidies for people on the Affordable Care Act’s individual health insurance marketplaces. It also calls for allowing people in the 12 states that have refused to expand their Medicaid programs under the ACA to get subsidized private insurance plans, closing what’s known as the Medicaid gap. Both would end in 2025 under the proposed framework.

The Medicaid gap proposal was quickly endorsed by Sen. (D-Ga.), who said he’s “pleased” with its inclusion.

The plan also calls for spending $150 billion to expand home and community-based care, far below the $250 billion supporters had sought.

The White House is also proposing to drop costly plans to pay for Medicare dental and vision coverage, but it would add hearing benefits to the health insurance program for the elderly.

“My focus is going to be on what’s in this proposal and there’s life-changing investments for the people I represent,” he said.

(Updates throughout with additional detail and reaction from lawmakers.)

With assistance from and Erik Wasson