The Inflation Reduction Act empowers the government to negotiate drug prices for the first time starting in 2023.
Photographer: Buddhika Weerasinghe/Bloomberg via Getty Images

Medicare’s drug price negotiations are poised to turn into a legal battle as the government works out rules to implement them and critics eye ways to skirt limits on lawsuits.

The Inflation Reduction Act will empower the government to negotiate prices of certain drugs for the first time starting in 2023—putting companies like , , and on the hook to participate.

Language in the law barring judicial review of how Medicare determines which drugs are eligible for negotiation will make any challenge tricky.

Potential avenues for lawsuits will include invoking the US Constitution, particularly the Due Process and Takings clause, legal experts say. Any lawsuit could delay implementation of the negotiations while increasing leverage through political bargaining, Thomas Miller, a senior fellow at the American Enterprise Institute, said.

“Stalling until better political winds blow in another direction is a frequent last-resort gambit,” he said.

The pharmaceutical industry opposes the negotiation provisions. It’ll have to wait until the Department of Health and Human Services issues regulations to implement the law before it can sue the agency, which could be months away.

The HHS didn’t respond to an interview request. PhRMA and BIO, two leading pharmaceutical industry groups, declined to say if they were preparing legal challenges. 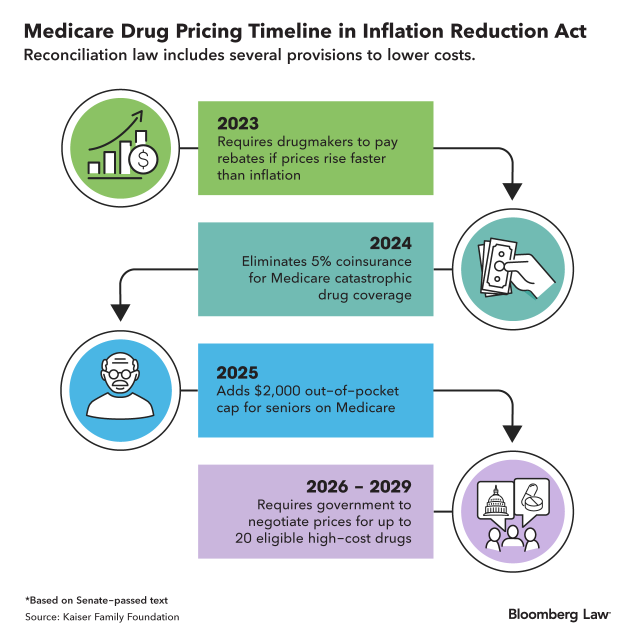 The drug-pricing law would set up a program to decide lists of negotiation-eligible retail prescription drugs and outpatient treatments provided by doctors and others with the aim of lowering the price government programs pay for them. Medicare would rank the most expensive drugs based on 2023 expenditures, and enter negotiations with the manufacturers to determine “maximum fair prices.”

Certain cancer treatments and other top brand-name drugs used by seniors could have lower prices as early as 2026 under the law.

The law bars administrative or judicial review of Medicare’s determination of negotiation-eligible drugs and the determination of maximum fair price. A Democratic aide on the Senate Finance panel said the provision was added to protect parts of the law that are critical to implementing the program, noting that administrative and judicial review has been precluded more than 40 times in the Medicare statute alone.

“A big purpose is efficiency,” said Laura Dolbow, a fellow at the University of Pennsylvania Carey Law School who is researching laws that explicitly prevent administrative and judicial challenges. “They often do it over things like how to decide the reimbursement rate or whether services or providers qualify for incentive payments.”

But a top Republican lawmaker and the pharmaceutical industry are raising questions about its wide sweep and due-process rights.

“While the practical scope of these policies remains unclear and will likely play out in the courts, barring judicial review on multiple fronts clearly risks creating job-crushing uncertainty and instability, chilling investment in crucial R&D and in domestic manufacturing,” Senate Finance ranking member Michael Crapo (R-Idaho) said in an emailed statement.

“The law explicitly prohibits judicial or administrative review of many of the secretary’s decisions. This arbitrary, take-it-or-leave-it approach is why this law will ultimately leave patients with fewer treatment options in the future,” said Brian Newell, a spokesman for PhRMA.

A due process challenge could contest the procedures Medicare used to arrive at the maximum fair price. Drug companies could also bring a claim under the unconstitutional conditions doctrine, under which the government can’t impose conditions on participation in a government program that require parties to relinquish a constitutional right, Dolbow said.

She noted that it’s “unclear whether a court would review constitutional challenges or whether the challenges would have any merit.”

Another avenue is the Takings clause under the Fifth Amendment. The pharmaceutical industry could argue that the negotiation requirements take drug companies’ private property without just compensation, Miller said.

Miller said plaintiffs could also look to the Eighth Amendment’s protection against imposing excessive fines. A provision in the Inflation Reduction Act imposes an excise tax of up to 95% of a product’s sales in the US for drugmakers that fail to comply with the negotiation process.

That excise tax would be vastly disproportionate to any purported harm to Medicare beneficiaries or taxpayers,” Miller said. “Even more so given the lack of procedural standards and recourse. The nominal tax would operate more like an unusually punitive fine.”

He added that while a claim under the excessive fines clause typically doesn’t succeed, it could at least delay negotiations while the litigation plays out.

Drug companies could separately argue that the HHS acted outside of its statutory authority, depending on how the agency exercises its authority to negotiate drug prices, Dolbow said. The drug price law requires the HHS to consider certain factors when it sets the maximum fair price, such as manufacturer-specific data about research and development costs, she said.

“Many long-shot legal challenges start out as efforts to see whatever might work,” Miller said. And a lawsuit could always include multiple grounds in the hope that one or two survive preliminary challenges, he said.

To contact the reporter on this story: in Washington at kbasu@bloombergtax.com