The Senate’s plan to lower US drug prices will inadvertently steer funds away from some life-changing medicines on the brink of release, including new cancer therapies, industry analysts say.

The House is expected to vote on Friday on a package that would enable the government to haggle with pharmaceutical giants over the costs of high-priced drugs. Complex drugs known as biologics are exempt from negotiations for over a decade after launch, but analysts warn that will shift investment dollars away from small-molecule drugs—which historically have been more common medications.

“The rational explanation for how this bill came to be is not that Congress intentionally favors biologic drugs but that Congress mistakenly disadvantaged small molecule drugs,” said Peter Kolchinsky, managing partner at RA Capital Management LP focusing on biotech.

“The bill would sadly result in the defunding of important R&D directed at cancer, Alzheimer’s, blindness, ALS, and other diseases of aging,” he said.

Biologics eligible for Medicare negotiation—a process that could take up to two years—must have been on the market for 11 years and not have a biosimilar version on its way to consumers. Also excluded from negotiation are biological products derived from human whole blood or plasma.

Small-molecule drugs need to have been on the market for seven years and not have a generic version. That window is “ too short a time post-launch to generate a positive return” Kolchinksy said. “Investors will prioritize early-stage investments in biologics.” 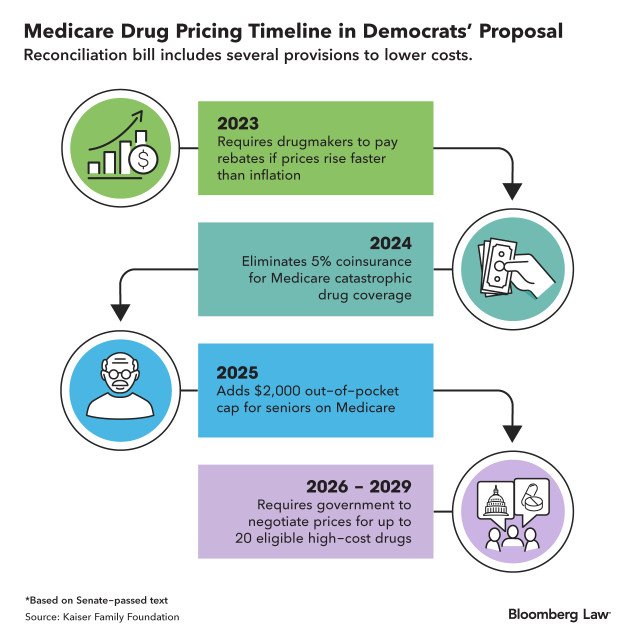 Some of the drugs likely to be impacted by the landmark budget reconciliation bill (H.R. 5376) include Imbruvica, AstraZeneca’s competing drug Calquence, ’s HIV treatment Biktarvy and Verzenio, among others, according to SVB Securities.

Some analysts say that the perks for biologics within the bill would disincentivize some research, reduce treatment options, and ultimately raise prices for consumers.

“The drug supply chain will produce more complex molecule drugs which are less prone to competition and secondly more prone to be captive to specialty drug distribution channels and not at the local pharmacy level,” said Antonio Ciaccia, CEO of the drug pricing data firm 46brooklyn Research.

Others, however, are skeptical of the legislation’s ability to meaningfully shift investment strategies.

If drugmakers “have the ability to make a biologic that is going to be a blockbuster, that’s going to be their first priority,” said Yaniv Heled, a Georgia State University law professor focusing on biomedical technology.

“This legislation changes nothing in their set of incentives. If anyone thinks this is going to prevent the Humiras in the world, I think they’re mistaken,” he said, referring to AbbVie’s biologic for arthritis, often cited as an example of an alleged drug monopoly.

But Heled said that the biosimilar exception “encourages explicit or implicit collusion by pharmaceutical and biosimilar companies.”

“As soon as the blockbuster gets a single biosimilar,” the companies behind each “can basically form a duopoly,” Heled said. “This basically says, you will never be able to negotiate the price of these drugs.”

By making small-molecule drugs eligible for negotiation before biologics, Congress’ legislation is triggering an “incentive realignment,’' one that leaves “relative disincentives for the development of small molecule generics,” Ciaccia said.

This may not be great for consumers, Ciaccia noted, because biologics are largely “things you inject,” not available at pharmacies, and expensive.

Industry experts also warn that the legislation could deter the use of already-approved drugs for new purposes.

By lowering incentives to invest, they say Congress is making it more difficult for drugmakers to see if old drugs can be administered for different reasons— for example, whether a drug for one type of cancer could treat another.

“Under this bill, there is no incentive to research new indications or new formulations of existing drugs. Period. Because you don’t have the opportunity to restart that thirteen year clock for biologics or nine year clock for small molecules,” said Lindsay Bealor Greenleaf, vice president and head of policy and reimbursement at consultancy ADVI Health LLC.

“If the clock is ticking and you’re going to be called up for government negotiations two to three years down the line, are you ever going to make that money back? That’s the calculus that’s going on right now,” she said.

This is particularly bad for cancer, industry experts warn, as small molecule drugs may be easier to use for treatments than biologics.

“Now we have an arbitrary force, Washington, saying no no, pour money into biologics because you have a longer time to maximize your return. That’s bad for science. That’s not borne out in fact. That’s particularly bad for the cancer community, where another round of small molecule breakthroughs are just on the horizon,” said John Stanford, executive director of Incubate and managing partner at Prism Group, a lobbying firm.

Provisions in the legislation made for biologics may have a negative impact on that side of the industry as well, some analysts say, potentially placing new pricing limits on products that generated notable profits and faced limited competition.

“The loss for biologics is very real. Some of those products enjoy 20-25 years of exclusivity, because science and biosimilar maturity haven’t come around yet,” Stanford said.

‘If I was the owner of a currently approved biologic, I’m probably still taking a pretty substantial financial hit. But if I’m investing in a new company today, they look like the preferred outcome,” he said.