When a headhunter for the drug industry approached in January about taking the helm of a powerful trade group, she brushed off the offer. She wasn’t interested in making “bad-smelling” positions palatable to Washington. “If you’re looking for a typical lobbyist,” she recalls saying, “I’m not that person.”

McMurry-Heath holds an M.D.-Ph.D., has worked at the U.S. Food and Drug Administration and Johnson & Johnson, and calls access to medicine “the social justice issue of our time.” The Biotechnology Innovation Organization had accelerated a search for its next leader as the novel coronavirus jumped across borders, and McMurry-Heath stood out. “She wasn’t the clear, obvious choice,” says , the chairman of BIO. Its last chief executive officer was former Republican Representative of Pennsylvania. “But we had the opportunity to make a statement.”

The board convinced McMurry-Heath that it was serious about having her lead a new national dialogue on medicine and science. “If we do not have a strong and vibrant biotechnology ecosystem, we are not going to be prepared to combat this crisis or any other crisis we’re likely to face in coming years,” McMurry-Heath says.

In the era of Covid-19, the pharmaceutical industry is trying to change its image from price gougers to virus-conquering scientists. Its largest trade organization, the Pharmaceutical Research and Manufacturers of America, has made TV ads with the tagline: “Science is how we get back to normal.” , CEO of Eli Lilly & Co., says, “There’s an opportunity to reset the reputation of the industry.”

As drugmakers invest billions of dollars and dedicate their top scientists to virus research, the crisis has also given them even more power to halt policies against their interests. That’s bad news for backers of adrug pricing bill once thought to have decent odds of passing Congress.

Drug costs have accelerated faster than inflation and are hitting patients more directly because of increasingly prevalent high-deductible health plans, says Jim Yocum, a consultant who helped build the price transparency technology used by Medicare.gov. List prices of brand-name drugs increased an average 4% annually from 2016 to 2020, according to a data analysis from ConnectureDRX, which provides price-comparison software to health plans. This follows years of high-profile price hikes, including ones to Mylan NV’s allergic reaction treatment EpiPen, which . 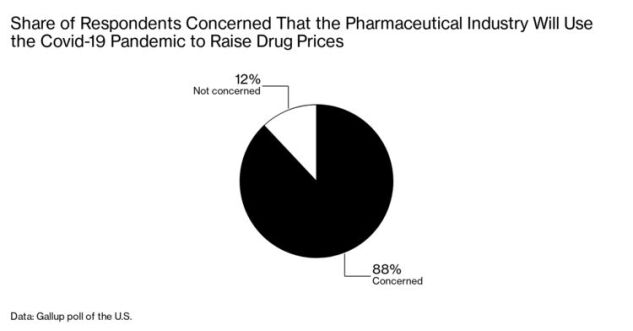 In 2019, Senate Finance Committee Chairman with Senator , a Democrat from Oregon, to penalize drugmakers for raising the prices of medicines above the rate of inflation. It also includes provisions that would redesign Medicare’s prescription drug benefit to cap seniors’ out-of-pocket costs and improve price transparency. Altogether, it would save taxpayers $95 billion over the next decade.

The bill looked like it had the potential to be signed into law this year—if Grassley, a Republican from Iowa, could team up with President Trump to win over more members of his party, including Senate Majority Leader .

in his State of the Union address that he would sign bipartisan drug pricing legislation “into law immediately” should it be presented to him. But many on Capitol Hill have worried his attention has been turned elsewhere. Lawmakers, too, have been focused on other priorities: Covid-19, economic catastrophe, and a wave of protests against police abuses.

“There are macroevents that have understandably changed Congress’s focus,” says , CEO of PhRMA, the trade group that represents the world’s largest drugmakers. “I’m sure that drug pricing discussions will come back around.” The industry, moreover, takes issue with the Grassley-Wyden bill’s “price-control” component, Ubl says, and believes it doesn’t do enough to address the roles of health insurers and pharmacy middlemen.

The leaders of BIO agree. Levin, the chairman, says he applauds Grassley for forging a bipartisan agreement, “but we have to rework this now in light of Covid.” McMurry-Heath, who started as BIO’s CEO and president this month, says previous conversations about drug reform are “now obsolete” because it would hamper innovation at a critical time. She says she worries about the consequences for that have grappled with the U.S.’s racial health disparities and are waiting for cutting-edge medicines, including for Covid-19.

The drug industry spends heavily lobbying Washington, and its argument that price limits hinder innovation is far from new. But its appeals resonate differently amid a pandemic. Decision-makers have rallied billions of federal dollars for drug research and development and loosened regulations to see experimental candidates across the finish line. And the two trade groups say they’ve already noticed a newfound appreciation for them in Washington.

There’s “a recognition that lawmakers are going to have to play nice,” says , director of health-care research at consulting firm Veda Partners. “The pharmaceutical industry was about as popular as mass murderers a few months ago,” he says. Now? “There’s a sort of halo effect that’s come around them.”

Grassley vehemently disagrees that the coronavirus should prompt a rethink of his proposal. “There’s no better time to address this issue,” he says, adding that he still intends to push for a vote this year with Trump’s backing and is even seeking to have it incorporated into the next phase of coronavirus relief legislation. “The pandemic is bringing up the cost of medicine. Affordability is still central to the conversation.”

The question of how much Covid-19 drugs will cost looms large. The first drug shown to help patients recover from the disease—Gilead Sciences Inc.’s remdesivir—doesn’t yet have a price tag. Although by Johnson & Johnson, Merck & Co., Moderna, and Sanofi have all benefited from U.S. taxpayer dollars, that doesn’t mean the government can set their prices.

Margarida Jorge, a campaign director for the coalition Lower Drug Prices Now, is skeptical the industry will set affordable prices. “We couldn’t trust them on EpiPens,” she says. “Why on Earth would we think that we could trust the prescription drug industry to create a vaccine that they would then price at a fair rate?” Almost 9 in 10 U.S. adults say they’re concerned the drug industry will leverage the pandemic to raise prices, shows a poll from Gallup and West Health released on June 18.

The clock is ticking on the long-delayed Grassley-Wyden bill. As Election Day gets closer, bipartisan legislation will become increasingly difficult to pass. If it’s put off until September, the bill is dead, says a Senate Finance Committee aide.

McMurry-Heath acknowledges that the industry isn’t widely trusted. But, she says, “the world has changed, and the debate is going to have to change with it.”

To contact the authors of this story:
in New York at rgriffin42@bloomberg.net