Venturing out of a hotel room in Hawaii right now might land you in handcuffs.

Just ask one of the roughly 20 people who’ve been arrested for violating Governor ’s two-week quarantine imposed on all who arrive in the state or travel between its islands.

Hundreds more have been arrested or issued citations for violating other aspects of the state’s emergency orders to combat the coronavirus, which are among the nation’s strictest and have helped to drive down the rate of infection to the second lowest in the country.

State parks and Hawaii’s famous beaches have been closed. Hotels are issuing single-use keys, forcing quarantined guests who leave their rooms to go to the front desk and explain why. Airlines have been encouraged to suspend incoming flights. The state’s visitors bureau has asked media organizations to “refrain from publishing any stories about Hawaii that might encourage people to travel to the islands.” 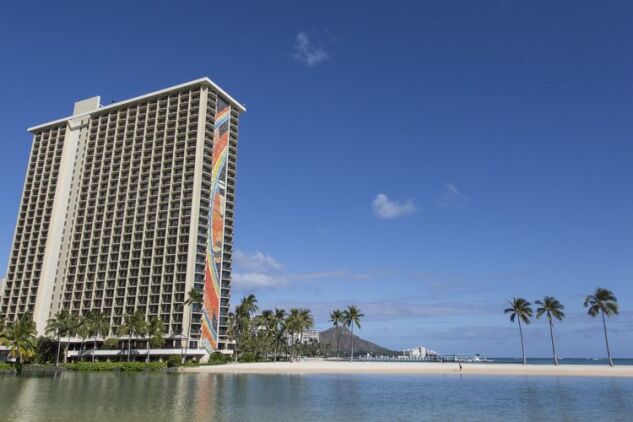 Pandemic experts credit the strict measures with helping to slow the number of new cases in Hawaii. Just 640 cases had been confirmed as of May 17, one more than the day before, according to Hawaii’s Department of Health. With 45 cases for every 100,000 residents, the state is above only Montana in per-capita infections, according to data compiled by .

Fewer than 10 new cases per day have been reported since mid-April while most other states continue to report might higher numbers.

Being thousands of miles from the nearest continent and reachable almost exclusively by air travel puts Hawaii in a unique position to not just contain the virus, but potentially eradicate it there, said Dr. Eric Toner, a senior scholar at the Johns Hopkins Center for Health Security.

“By every metric that we follow they’ve done a terrific job in being able to stop the spread,” he said. “If you can get the community spread under control and you can implement strict screening of passengers, you really can stop the epidemic in their state.”

Ige has signaled he plans to maintain the tough stance on arriving travelers, even as several parts of the mainland U.S. begin to reopen their economies. While the state has already begun to reopen recreational draws including some state parks, beaches and golf courses with social distancing measures, Ige last week said he planned to extend the travel quarantine through the end of June.

The measures have come at a severe cost to Hawaii’s tourism industry, which accounts for a fifth of its economy. Some 10 million visitors spent $17.8 billion in the state last year, according to the Hawaii Tourism Authority.

“The million dollar question now is how long are these restrictions going to stay in place,” said Dan Dennison, a spokesman for the state’s COVID-19 Joint Information Center. 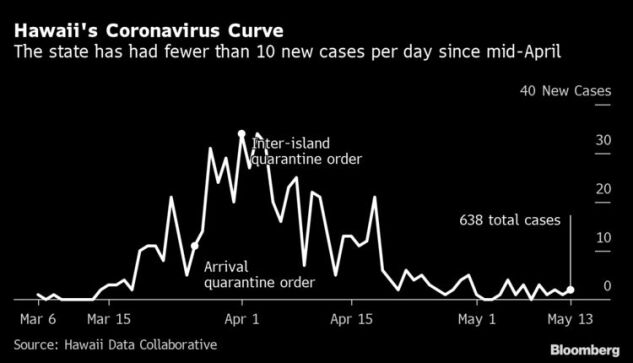 Air travel to Hawaii has plunged by roughly 98%, a decline more severe than the U.S. overall where airline boardings are down closer to 90%. Only a few hundred people have arrived in the state each day since late March compared to roughly 30,000 daily in the same period last year, according to figures from the Hawaii Business, Economic Development & Tourism department.

Those who do arrive may leave the airport only after going through an elaborate procedure.

First, passengers are given a temperature check and those shown to have elevated temperatures receive an additional medical screening by paramedics stationed at the airport. 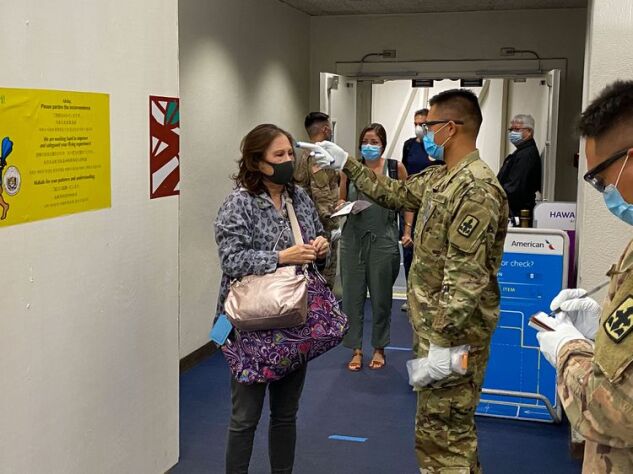 A traveler has her temperature checked at Daniel K. Inouye International Airport in Honolulu.
Source: Hawaii Department of Transportation

Those who pass that must then provide a declaration listing their name, mobile phone number and hotel information to airport personnel who then verify the details are accurate, including dialing the traveler’s number to ensure that it rings, and contacting the traveler’s hotel to verify they have a reservation.

“If they refuse, they will be handed to law enforcement, right there,” spokesman Tim Sakahara said. Travelers will be sent home if they’re unwilling to make a hotel reservation or unable to afford one.

“That has happened several times, dozens of times actually, and a law enforcement officer will stay with that person at the gate and watch them get back on a flight to the city they came from,” he said.

Finally, passengers must then sign a legal document acknowledging they’ll abide by the 14-day quarantine before being allowed to leave the airport. 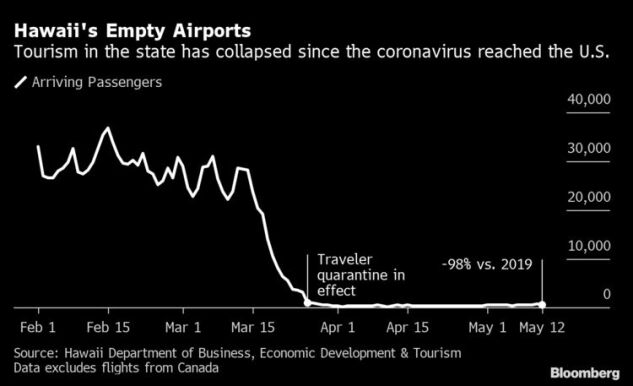 State officials then will make at least three follow-up phone calls to verify travelers are complying with the quarantine. The state has also launched a smartphone app to help with the process.

Hotels, too, have been enlisted to help enforce the quarantine. Staff have provided tips to law enforcement about travelers leaving their rooms, Sakahara said.

Recently, the Hawaii Lodging & Tourism Association asked hoteliers to issue single-use use room keys that allow guests to only enter their room once, thereby forcing those that break quarantine to request a replacement key from the front desk. Most hotels have agreed to enforce the policy, according to a list posted on a state legislature website.

“If they violate this law, we encourage the front desk to report them to the authorities,” association president said in a note to hotels.

So far about 20 people have been arrested for violating the state’s quarantine order, including a couple on their honeymoon and a trio apprehended in their hotel’s pool, according to authorities. Violators face as much as a year in prison and a $5,000 fine.

“Quarantine means that you stay in your room. You can’t go to the pool. You can’t go to any facility at the hotel. You get your meals delivered,” Ige told reporters in April. “And when visitors understand that’s what it is and that we’ll enforce it, we are pretty confident they’ll choose not to be here.” 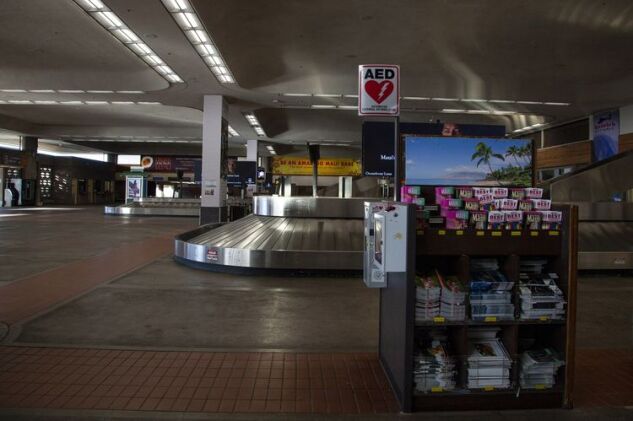 Plummeting demand and the state’s quarantine orders were cited by the U.S. Transportation Department’s decision to allow to suspend flights to three of the state’s airports through mid-August. and got approval to halt services to the same locations through September.

Airlines have also reduced service to Daniel K. Inouye International Airport in Honolulu, with the only flights from the U.S. mainland originating from Seattle, San Francisco, Los Angeles and Oakland, California, Sakahara said.

likewise received permission to suspend long-haul service between Honolulu and eight major U.S. cities, including New York, Boston, Las Vegas and Seattle. Ige as well as city and county leaders told federal officials they supported the cutbacks in their effort to blunt the virus.

“My primary goal is protecting the health and safety of the citizens of the three islands and jurisdiction that I care for and represent,” Michael Victorino, mayor of Maui County, wrote in an April 9 letter to the Transportation Department. “We rely on the significant contributions air transportation provides to our economy. We look forward to a time when we can once again welcome visitors to our islands.”

Jeff Schlegelmilch, deputy director of ’s National Center for Disaster Preparedness, said the tourism sector’s outsized role in the state’s economy will make it very difficult to welcome visitors once again, even after the quarantine order’s current May 31 expiration date.

“When you reopen, if the virus is still burning all around you, you’re allowing that into your community again,” he said. “They have control over the island but they don’t have control over everywhere around them, and I don’t think there’s a viable exit strategy until there’s something more significant on the pharmaceutical front. I think they’re in this for the long haul.”