The federal government asked the Supreme Court Monday to cancel oral arguments in appeals the Trump administration filed to let Arkansas and New Hampshire require that Medicaid recipients work as a condition of coverage.

Acting Solicitor General Elizabeth Prelogar filed a motion asking the high court to remove the cases, originally scheduled to be heard March 29, from its calendar. She also asked the justices to toss the lower court decisions and send the cases back with instructions to have the secretary of Health and Human Services resolve the matter.

Opponents of Medicaid work requirements say they do more harm than good by pushing some of the country’s poorest people off a program that was designed to help them access affordable health care. The HHS under the Biden administration is particularly concerned about states testing policies that put people at risk of losing their health insurance during the Covid-19 pandemic, Prelogar said.

The U.S. Court of Appeals for the District of Columbia Circuit issued rulings striking down the work requirements last year, which led the Justice Department to appeal on behalf of the HHS when President Donald Trump was still in office.

The HHS under President Joe Biden on Feb. 12 notified Arkansas, New Hampshire, and other states with previously approved work requirement waivers that the agency has begun the process of determining whether to withdraw those approvals. 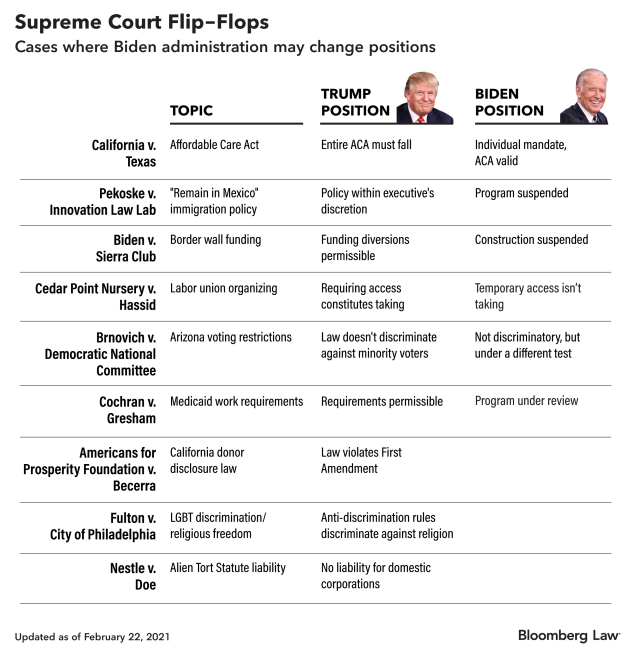 In light of these circumstances, Prelogar said these cases no longer present a suitable context for the court to address the question presented, which concerns the scope of the secretary’s authority to approve the Arkansas and New Hampshire Medicaid work requirements.

“HHS has now made a preliminary determination that allowing work-related requirements to take effect in Arkansas and New Hampshire would not promote the objectives of the Medicaid program and has commenced a process to determine whether to withdraw its approvals of those requirements,” Prelogar said.

Arkansas pushed back on the federal government’s request in a motion of its own.

The “changed circumstances” DOJ highlighted—namely the HHS proposal to revoke the waivers at issue—do not moot these cases, and the central question of what Medicaid’s objectives are will likely return to the court in litigation over waiver revocations, Attorney General Leslie Rutledge and attorneys in her office, said.

“This Court granted certiorari in these cases to decide whether the Secretary of Health and Human Services reasonably determined that two States’ experimental community-engagement requirements, Arkansas’s and New Hampshire’s, were likely to promote the objectives of Medicaid, after the court of appeals below held that health care coverage alone, not health, was Medicaid’s overriding objective,” they argued.

“A decision on whether that holding is correct remains as pressing today as when this Court granted certiorari.”

Arkansas said it’s not opposed to the court putting the case on hold and removing it from the March argument calendar as long as the justices hear the cases this term.

(Updated with details of Arkansas's opposition.)