The Facetime video application is demonstrated on an Apple Inc. iPod Touch at an event in San Francisco, Calif., on Wednesday, Sept. 1, 2010.
Photographer: David Paul Morris/Bloomberg

Chatting with physicians online has boomed during the pandemic via video-conferencing apps such as Google Meet, Zoom, Skype, and Apple FaceTime to keep patients and doctors from potentially exposing themselves and others to the coronavirus. But patients living in “digital deserts” without access to high-speed internet or adequate cellphone service may not have those options, forcing them to either risk exposure by visiting a doctor’s office or postpone necessary care.

“So, I’ll take what’s needed to draw blood, my blood pressure cuffs, stethoscope, and anything else that used to be in my little black bag years ago, for example, and just perform the care,” said Rutherford, CEO of Confluence Health, which has two hospitals, more than 40 medical specialties, and primary care throughout north central Washington. It has a number of patients in Okanogan County, which is one of the largest, most rural areas of Washington state, and the Colville Indian Reservation.

The Federal Communications Commission in April estimated that 22.3% of Americans in rural areas and 27.7% of Americans on tribal lands don’t have access to fixed broadband with the typical speed standard of 25 megabits per second (mbps), a moderate browsing speed. By comparison, only 1.5% of Americans in urban areas can’t reach that speed. Nearly 21% of Americans also aren’t active smartphone users, according to market research.

That leaves patients in underserved rural areas with few options. They can delay care or sometimes drive hundreds of miles for treatment while risking exposure to the virus.

“The closest cardiologist for a patient with heart disease living in Oroville is 134 miles away, in Wenatchee,” Confluence Health CEO-elect and physician Doug Wilson, a physician and CEO-elect of Confluence Health, said. “We have patients who live in Republic who must travel to Omak, which is 64 miles each way, to receive pregnancy care because none of the other nearby towns still have doctors who can deliver babies.” 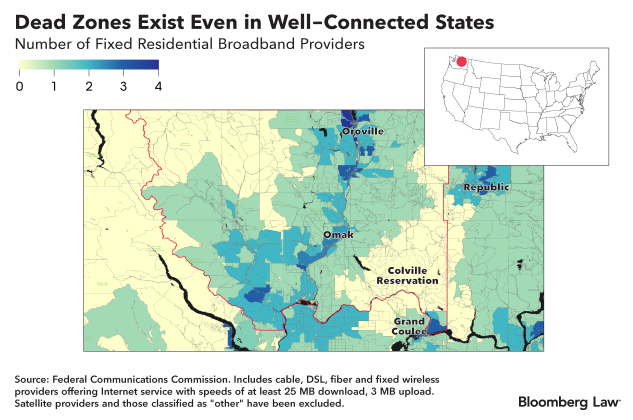 While the FCC has programs to help low income residents with affordable phone service, bringing the high-speed internet connection necessary to make things like telehealth a viable option for low density rural areas will be an expensive challenge requiring proper government incentives.

“It really involves putting in physical infrastructure,” Joseph Kvedar, professor of dermatology at Harvard Medical School and president of the American Telemedicine Association, said. “The reason these digital deserts exist now is because of low population density in these areas. If there were more incentives from the federal government to put that infrastructure in, I think that would be more healthy for everyone.”

The FCC’s Lifeline program provides discounted phone service for low-income participants, but it should be updated to keep from falling behind the times, according to Democratic FCC Commissioner Jessica Rosenworcel.

As of December 2019, eligible participants can get 1,000 mobile minutes and 3G mobile broadband for $5.25 per month, according to the program’s website.

Expanding internet access is a trickier and more expensive proposition.

Internet service suppliers recently urged Congress and federal regulators to shore up broadband funding to increase those efforts. “We need broader contributions and players in the broadband ecosystem because this infrastructure is expensive,” Gene Kimmelman, a senior adviser for advocacy group Public Knowledge, said during a May 13 Senate panel.

No Patient Left Behind

Prior to the pledge, Comcast increased internet speeds from 15 megabits per second to 25 mbps so residents can continue to use the services from home. The provider also said through June 30 it will give new customers 60 days of free internet service, according to a company spokesman.

However, those promises don’t cover the populations who didn’t have a phone or broadband connection to begin with, Donovan said.

Ultimately, the onus of the digital divide isn’t just on the government and broadband providers.

While telehealth has flourished during the pandemic, it also highlights the gaps some patients face to care, whether it’s high-speed internet access or lack of transportation, Payal Desai, an associate professor at the Ohio State University East and director of the school’s adult sickle cell program, said.

“We may not understand that very well yet, because telehealth wasn’t initially adopted,” she said “There’s some work that has to be done so those patients don’t get left behind and that gap that we already have doesn’t extend any further.”