Becton Dickinson And Co. insulin pen needles are arranged for a photograph in the Brooklyn borough of New York, in April 2019.
Photographer: Alex Flynn/Bloomberg

Democratic leaders of a key House committee insisted they would push to empower the government to negotiate with drugmakers, saying it was essential to lowering Americans’ pharmacy expenses.

The Democrats’ goal of passing a drug price negotiation measure () confronts widespread opposition from Republicans and further hurdles in the Senate. Anything short of their bill wouldn’t be enough, Democrats said Tuesday, suggesting limited room for bipartisan negotiation.

The legislation is the “comprehensive solution this country needs to fix our broken market for prescription drugs,” (D-N.J.) said. “We need to act on H.R. 3,” he said during a hearing of the House Energy and Commerce Committee, of which he is the chairman. 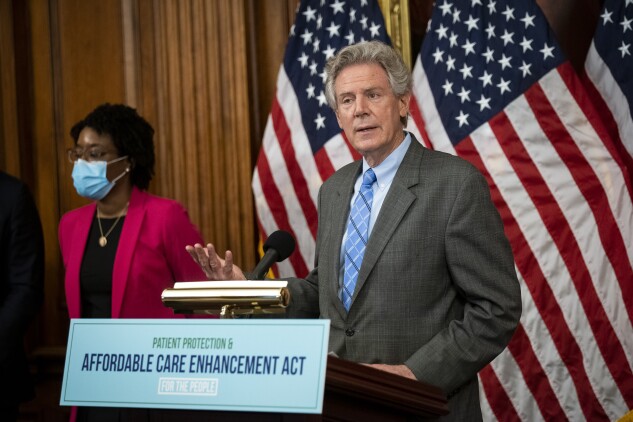 Rep. (R-Texas) denounced the legislation as a “partisan” exercise. Other Republicans called for simply placing a cap on what seniors in Medicare pay each year for medicines, and to stop some anti-competitive practices common among some drugmakers.

Pallone told reporters Tuesday he and other House committee leaders plan to mark up and pass H.R. 3 this year, but didn’t give a more specific timeline.

The legislation would direct the government to negotiate the price of insulin, as well as a list of pharmaceutical and biological products that lack competition. It would penalize drugmakers that don’t come to the bargaining table. It would also cap the prices of those drugs at 1.2 times their average price in Australia, Canada, France, Germany, Japan, and the U.K., where medicines are generally priced at a fraction of what Americans pay.

And the legislation would limit to $2,000 per year what people on Medicare’s prescription drug benefit pay for medicines.

Republicans focused on the benefits of capping out-of-pocket costs for patients. But Democrats pushed for the more comprehensive plan laid out in H.R. 3—which Rachel Sachs, an associate professor of law at Washington University in St. Louis, also backed.

“Although capping out-of-pocket costs is important to help patients, it doesn’t actually lower prices or spending, it just moves money around in the system,” Sachs said at Tuesday’s hearing.

Only lowering out-of-pocket costs for patients could actually slightly increase premiums and Medicare spending overall, according to projections from the Medicare Payment Advisory Commission, which advises Congress about health policy, she said.

“Although is important to lower out-of-pocket costs, that needs to be coupled with other reforms which would directly address those high prices,” Sachs said.

Capping what individuals pay at the pharmacy counter is also the preferred policy for the drug industry.

In ‘s quarterly earnings call on Tuesday, company leaders said they would like the White House and Congress to focus on “rebate reform, capping beneficiary cost-sharing in Medicare Part D, and incentivizing the uptake of biosimilars.”