New York Gov. Andrew Cuomo on Wednesday said he stood by his handling of coronavirus patients in nursing homes as calls mounted for an independent investigation.

State Senate Republicans along with five New York Republicans in Congress, are demanding a federal probe into the state’s guidance for nursing homes and long-term care facilities, which required the facilities to admit Covid-19-positive patients.

“I’m not going to get into the political back and forth,” Cuomo (D) said when questioned at his daily virus briefing. “Anyone who wants to ask, why did the state do that with Covid patients in nursing homes? It’s because the state followed President Trump’s CDC guidance, so they should ask President Trump. I think that will stop the conversation.”

People in nursing homes are more susceptible to contracting and dying from the virus, according to the federal Centers for Disease Control and Prevention.

There were 5,847 confirmed and presumed deaths at nursing homes and long-term care facilities in New York state as of Tuesday, according to state data. The deaths account for more than 25% of the 22,976 virus-related fatalities statewide. 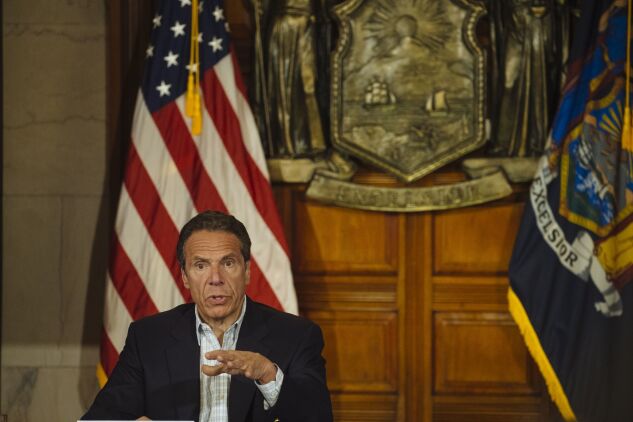 Nationally, at least 28,100 residents and workers have died from Covid-19 in nursing homes and long-term care facilities, according to a New York Times database.

A U.S. Government Accountability Office report released Wednesday found that before the pandemic, most nursing homes were cited for infection prevention and control deficiencies (82% of those surveyed from 2013-2017). About half of these homes had persistent problems and were cited across multiple years.

Cuomo on April 23 announced that the state health department and attorney general’s office would investigate nursing homes to ensure they follow state guidelines.

Covid-positive patients must be isolated and have separate staff from those working with the general population, according to the guidelines. If a facility can’t meet the requirements to properly quarantine the person or provide the appropriate level of care, the patient must be transferred to another facility.

“Many of the state’s policies have put not only the residents of these facilities, but also those who care for them, at risk of direct exposure to COVID-19,” Stefanik said in a May 15 news release.

State Senate Republicans and Assembly Health Committee Chairman Richard Gottfried (D), have similarly called for an independent probe, saying that it’s inappropriate to have the state health department lead an investigation into its own procedures.

“We need to find out why so many have become sick and died, what we’ve done right and wrong and what we can do now and for the future,” Gottfried wrote in an op-ed for the New York Post.

The pushback comes after the state earlier this month changed how it reports virus-related fatalities at nursing homes and adult care facilities.

The facilities previously were providing different information, with some including presumed deaths along with confirmed deaths, state officials said. The data are now listed separately, and nursing home residents who subsequently die in hospitals are counted in the number of hospital deaths.

Lawmakers specifically expressed concern over a March 25 health department advisory stating that residents couldn’t be denied admission to a facility after testing positive for Covid-19.

During Wednesday’s virus briefing, Cuomo said the guidance came as the state was trying to dramatically increase hospital capacity.

“Is the best use of a hospital bed to have somebody sit there for two weeks in the hospital bed when they don’t need the hospital bed, because they’re not urgently ill? Cuomo asked. “They’re just waiting to test negative on the antibody test.”

He added that a “nursing home cannot accept a patient who they are not qualified to handle.”

The Cuomo administration also has come under fire for a provision in the state budget that provides immunity to health-care facilities and professionals from any civil or criminal harm or damages alleged to have been sustained while arranging or providing for services during the pandemic. A March 23 executive order further extends the protections, unless such injury or death was caused by “gross negligence.”

With nursing home deaths remaining high in the state, Cuomo on May 10 announced that all nursing homes and adult care facilities must test all personnel for Covid-19 twice a week and report positive test results to the state health department by the next day. Hospitals, going forward, cannot discharge patients to nursing homes unless they test negative for the virus, according to the executive order.