and CureVac NV are staking claim in court to a long history of scientific breakthroughs that led to the messenger RNA vaccine used for Covid-19.

These and other rival drug patent owners are asking federal courts for a cut of the profits and collected from their revolutionary shots. How these battles play out will set the tone for other patent holders feeling left out of the Covid innovation race and future health crises.

At least seven lawsuits have been launched against makers of the mRNA Covid-19 vaccine, Bloomberg Law data show.

“This is the canary in the coal mine,” said Kevin Noonan, co-chair of McDonnell Boehnen Hulbert & Berghoff LLP’s biotechnology and pharmaceuticals practice group.

“Many groups have been working to develop vaccines of this type for 10, 15, 20 years. Lots of technology went into that effort,” he said. “People may just file their lawsuit to have their stake in the ground and protect that investment.”

The threat of lawsuits from disgruntled patent owners has persisted since the earliest days of the pandemic. Often standing in the way was the possibility of bad publicity, with companies reluctant to move against solutions to skyrocketing deaths and infections from the coronavirus.

But now, as the Centers for Disease Control and Prevention rolls back quarantine guidelines and a Covid-wary public resumes normal activities, bringing patent suits has become “socially acceptable,” she said.

“Whoever believes they have a right to a piece of the proceeds from these vaccinations will continue to come out in the near future. Because they were holding off—nobody wanted to look like the bad guy. Nobody wanted to be the one who’d block saving the world,” Auth said. 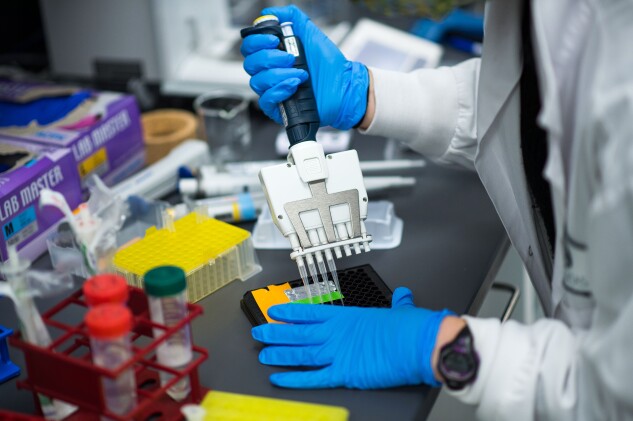 Operations at the Acuitas Therapeutics lab, which provided its lipid nanoparticle delivery system in the development of the Pfizer BioNtech Covid-19 vaccine.
Photographer: James MacDonald/Bloomberg via Getty Images

Legal activity involving Covid-19 manufacturers began well before the US entered the pandemic state. Many lawsuits centered around the use of lipid nanoparticles, or tiny balls of fat protecting genetic material as it travels the body to enter cells to deliver drugs. mRNA, the genetic material at the heart of Moderna and Pfizer’s Covid vaccines, needs the lipid nanoparticles as a protective shell.

“The lipid nanoparticle technology was something being disputed very early on,” said Tahir Amin, co-founder of the Initiative for Medicines, Access and Knowledge.

A pre-pandemic attack by Moderna on Arbutus Biopharma Corp.'s patents on the drug-delivery technology signaled that “there was going to be some trouble brewing.”

That dispute, which ended with the US Court of Appeals for the Federal Circuit going against Moderna, left Arbutus’ patents “battle tested and tremendously strengthened,” said Aydin Harston, a Rothwell Figg patent attorney.

Arbutus is now among the companies testing the strength of its intellectual property against vaccine makers. The company, along with Genevant Sciences GmbH, filed suit in a Delaware federal court against Moderna, seeking royalties from Covid-19 vaccine sales.

“The windfall profits for Pfizer/BioNtech and Moderna have painted a huge target on those companies,” Harston said.

Allele Biotechnology and Pharmaceuticals Inc. sued Pfizer Inc. and BioNTech SE in October 2020 for allegedly using its patented research tool to develop and test their vaccine candidate, though the parties jointly dismissed the case.

In March of this year, Alnylam launched lawsuits at both Pfizer and Moderna, claiming its lipid nanoparticle technology was an important part of the companies’ vaccines. In July, Alnylam upped its attack with new lawsuits against the vaccine makers, alleging they infringed even more IP with their innovations.

“It is not surprising at all that various companies have mined their patent estates for any claims that may cover some aspect of the marketed vaccine products to get a seat at the negotiating table for a piece of the windfall profits,” Harston said.

Biopharma company CureVac is also among those bringing lawsuits. The German drugmaker, which tried developing a coronavirus vaccine though eventually abandoned the project, sued BioNTech for compensation.

“Had it succeeded, CureVac would likely be the one sued for patent infringement rather than asserting patent rights,” Harston said.

Legal experts say that at least a small number of new lawsuits should be expected soon.

“We’re reaching that point of, ‘who’s got the pieces of the puzzle,’” i.e. the patents on the technology behind the vaccine, Amin said.

But the future of such litigation will at least partially “depend on the success of Moderna, Pfizer, etc. defending themselves in court,” said Daniel Takash, a regulatory policy fellow at Niskanen Center.

“If these lawsuits all fall flat on their face and are seen as sore losers in the vaccine race trying to get a cut of the loot, that would probably create a chilling effect and deter future lawsuits. If not, then you’ll probably see more of these,” Takash said.

Moderna is taking what many legal experts consider a critical step in mounting its defense.

The company is arguing Arbutus and Genevant should be suing the government rather than itself for royalties. That’s because federal law has traditionally provided a haven for contractors accused of infringing patents with production for the US government. Moderna supplied its doses to the government as part of the nationwide vaccination effort.

“If this defense works, it will encourage companies to partner with the government and go forward with vaccines or medicines” in future health crises, Auth said.

A Moderna victory here would send Arbutus to seek government compensation in the US Court of Federal Claims, where a payout would generally be far smaller than that possible from a private company in district court.

That “may inhibit other companies from filing suit,” Noonan said. But if things go the other way, potential plaintiffs could be convinced that “courts may entertain” their arguments.

Alnylam may play a role in determining the volume of future lawsuits. The company has a “pipeline” of patent applications that, once granted, will likely lead to a rise in the number of lawsuits it files, Harston said, adding that several other patent holders may also have claims they can assert.

“Those parties may be considering jumping into the fray or may be involved in licensing negotiations,” he said. “Thus, the filing of new actions is far from over.”