Bilingual addiction specialists, methadone treatment vans for underserved areas, and research into race’s role in drug policy are among team Biden’s plans for getting a grip on America’s addiction crisis.

The administration is sinking millions of dollars into treatment efforts and has requested over $10 billion from Congress to continue the fight into the next year, emphasizing its push to meet treatment needs specific to American Indians and other populations.

The Covid-19 pandemic, however, is complicating health equity efforts. Overdose deaths jumped about 30% in 2020, marking the highest spike in a single year, according to provisional data from the Centers for Disease Control and Prevention, increasing the urgency for treatment focused on communities in need.

“With the speed at which we as a nation confronted the Covid pandemic, we know what we can do now. And there’s no reason we can’t do the same with respect to substance use disorder,” said Keli McLoyd, director at the Philadelphia Coalition on Children and Opioids.

While campaigning for president, President Joe Biden promised to invest in community-based prevention efforts like needle exchanges and medication-assisted treatment, help states purchase overdose prevention drugs, support the training of treatment specialists for specific communities, and stop incarceration for drug use in favor of treatment.

So far, the administration has lowered restrictions for operating mobile methadone dispensaries to reach underserved areas and eased guidelines for doctors to prescribe at-home drugs for fighting addiction.

Yet more work remains to be done to reach communities in need, addiction experts say.

“You have communities that were absolutely devastated by mass incarceration, over policing, child welfare environment, the designation of ‘crack babies.’ Then fast forward to the opioid epidemic. And we’re sort of asking people to trust a system that is not built for them and has historically dehumanized them,” McLoyd said.

Advocates say work needs to be done to make treatment more accessible to the communities that need it most, efforts that call for bilingual treatment specialists, housing assistance, and keeping services within a reasonable geographic reach.

The administration has touted equity for racial groups and underserved communities throughout its tenure.

In January, Biden issued an executive order calling for a “whole-of-government equity agenda” to “pursue a comprehensive approach to advancing equity for all, including people of color and others who have been historically underserved.” A day later, the president launched a Covid-19 Health Equity task force.

NIH in June announced a clinical trial across five cities that would use mobile health vans to dole out overdose reversing and opioid treatment drugs to underserved areas. The agency said it aimed to get 860 opioid use disorder patients who inject drugs enrolled in the study.

That same month, the administration loosened requirements for addiction treatment providers to use mobile clinics to dispense methadone, describing the move—initially pushed by the Trump administration—as a way to cut down on treatment barriers for underserved communities.

NIDA is looking into racial inequities as well, Volkow said, and the efforts pre-date Biden taking the presidency. The agency last year launched the Racial Equity Initiative, and NIH-backed research released in January found that from 2011 to 2018, methamphetamine-related deaths more than quadrupled for Alaska Natives and non-Hispanic American Indians.

“Everything that was happening with Covid and the Black Lives Matter movement” pushed the agency “to be much more proactive and aggressive” with its efforts, Volkow said.

Yet some, like American Enterprise Institute’s Sally Satel, don’t believe that addiction treatment policy “should be guided by group identity,” but rather by “who’s in need.”

“This was the whole debate over the equity issue, defined as trying to dispel disparities,” said Satel, a practicing psychiatrist who has researched drug policy and the opioid crisis. “That’s not an unreasonable goal, but it shouldn’t be the primary goal.”

Opioids took their toll on diverse communities well before the pandemic.

Opioid deaths have increased between 2001 and 2019, for Black, non-Hispanic people in the U.S., starting at 1,123 and going up to over 7,000, according to Kaiser Family Foundation (KFF) research. Hispanic U.S. opioid deaths have hit historic highs in recent years as well, coming in at over 5,200 for 2019. 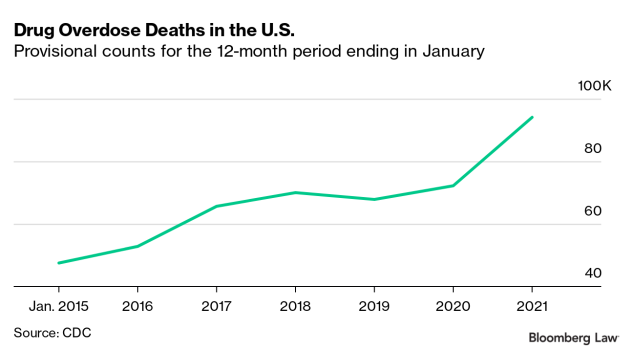 And for underserved communities, the overdose crisis has only worsened during the Covid-19 pandemic. KFF said an uptick in issues around substance use is affecting people of color at a disproportionate level. From January to September 2020, Native American and Alaskan Natives had the highest rate of overdose deaths per 100,000 people.

When addiction “crosses multiple populations that are typically underserved, it can service as a function of or a co-occurring disorder with other health conditions where health equity can be an issue,” such as chronic mental health, said Denis Antoine, director of the Motivated Behaviors Unit at Johns Hopkins Hospital.

“Focus on addiction, you get a common denominator,” he said.

The pandemic did help with access by easing the way for telehealth services to come to the forefront, but it hasn’t been positive for everyone.

One critical area for analysis on addiction treatment and other health equity issues is “the digital divide,” said Antoine.

“This age of telehealth that has grown during Covid has really highlighted the need to examine how individuals are able to access care,” he said. “Not everyone owns an iPhone or has the data plan to conduct a video visit or the minutes to conduct even the phone visit. Everyone’s access is not equal, and that’s a point for equity that needs to be examined.”

The administration has said it plans to work through its Office of National Drug Control Policy to weigh whether providers should permanently be able to treat with medications for opioid use disorder via telehealth without a prior in-person evaluation.

Also on the table is tapping a more diverse addiction workforce to meet the needs for specific communities.

With addiction treatment policies, “if we don’t think about how they may differently impact people of different racial and ethnic backgrounds, we can exacerbate inequities,” said Brenna Greenfield, a University of Minnesota professor who has worked on substance use disorder issues in indigenous communities.

The Biden administration plans to track the success of its addiction efforts, emphasizing the importance of data collection.

But while there’s “a huge focus on gathering data and understanding, facts are facts,” McLoyd said.

“There’s a point where we need to take the data and really think about what it means and looks like. For me the data is very clear—in the past couple of years, we’ve seen the advent of different types of treatment open up, reduced prescribing and increased availability of treatment,” McLoyd said. But “we’re still seeing underutilization, and we’re seeing opioid overdose rates rise.”