Health-care workers wearing protective masks walk along a street in Bonifacio Global City during a partial lockdown imposed due to the coronavirus in Metro Manila, the Philippines, on May 20. The nation is among the countries trying to balance reopening the economy with stemming the virus outbreak.
Photographer: Veejay Villafranca/Bloomberg

Developing countries face an explosion in coronavirus infections as they exit lockdowns amid worsening outbreaks because the economic cost of remaining shuttered is too great.

From Pakistan to the Philippines, Brazil to South Africa, governments have been choosing to end orders confining people to their homes even as the global pandemic envelops the developing world. Researchers at the predict India’s infections could almost double from current levels to more than 750,000 by mid-July, while Brazil just hit -- the second-highest tally globally - with more increases forecast for this month.

Soaring unemployment and even starvation are forcing many countries to end sometimes months-long lockdowns that largely failed to stymie the virus like they did in Europe and China. With a coronavirus vaccine still months -- maybe even years -- away, these escalating outbreaks risk fueling the wider pandemic just as richer countries start to open up their economies and nations including China and the U.S. see resurgences.

Policy makers in poorer countries are now left with few potent tools to combat a virus that has the potential to overwhelm their health-care systems. In many places, those systems remain fragile despite efforts to add hospital beds and testing facilities when citizens were compelled to stay at home. 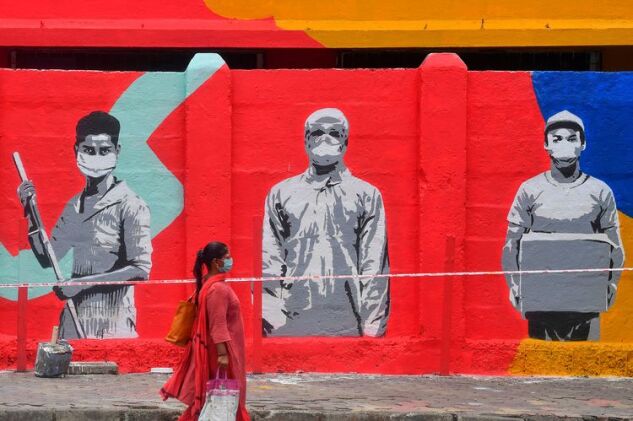 “There’s a de-facto realization that we’re going to have to live with this virus at infection levels that up to this point had been seen as dangerous and unacceptable, and couple it with a different strategy,” said Stephen Morrison, director of the Global Health Policy Center at the Center for Strategic and International Studies in Washington. “The lockdown and social distancing practices don’t work or have limited utility in so many developing countries.”

With more than 2.3 million cases, the U.S. remains the nation with the world’s largest number of infections. But data compiled by Bloomberg show that the U.S. and U.K. now account for about 29% of global cases, down from 37% two months ago.

Meanwhile, Latin American and South Asia are emerging as hotspots. The 10 countries from those regions with the most number of infections accounted for 29% of infections globally as of Sunday. Two months ago, they comprised only 5% of the world’s cases.

In the U.S., some states have also come out of lockdown while the virus has been spreading, but the challenges of managing widespread shutdowns are particularly severe in poorer nations.

In the Philippines, the experience of house cleaner Yolanda, who didn’t want to be publicly identified by her full name, shows why lockdowns weren’t as effective in halting the virus in developing countries. When the stay-at-home order came down in March, her husband, three children and five grandchildren all depended on her to put food on the table.

Staying home would have put the entire family at risk of starvation. Yolanda said she applied for aid to a local government center, but even though her neighbors received packages of canned sardines, noodles and rice, she got none and was given no explanation.

“I can’t afford not to work,” said the 52-year-old, who is among the millions that make up the informal workforce in metropolitan Manila. “I couldn’t have stayed at home. Bills were mounting. We can’t rely on the government for aid.” 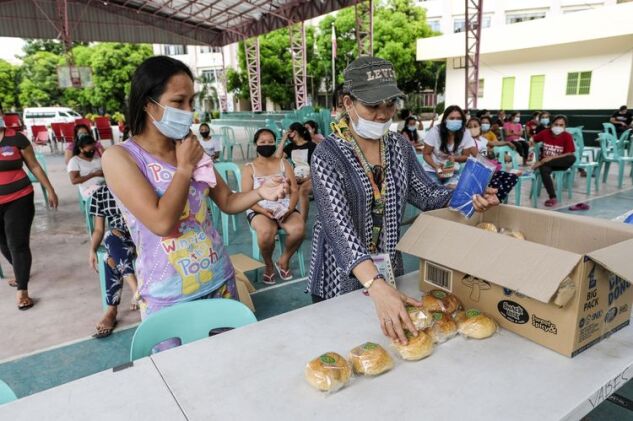 The government of President has allowed businesses and transportation to resume and eased other restrictions since June 1.

Since then, infections have surged. Confirmed cases in the Philippineshave quadrupled to nearly 30,600 since two months ago. At this rate, it will surpass The University of the Philippines’ forecast made at the beginning of the month that cases will top 40,000 by the end of June.

While that is substantially lower than the hundreds of thousands in the U.S., Brazil and India, the increases are substantial for the Philippines which has a population of 108 million and has tested about 0.5% of its residents, based on estimates from its health department.

Shutting down businesses, telling people to stay at home and enforcing lockdowns helped prevent half a billion infections in China, South Korea, Italy, Iran, France, and the U.S., according to a recent study published in the journal Nature. But such steps aren’t as effective in poorer countries because housing is typically much denser, a challenge to social distancing. Also, much more of their workforce are employed in informal labor, reliant on daily wages.

India imposed its lockdown almost three months ago, and some restrictions like bans on international flights remain in place. While the country has ramped up manufacturing of face masks, ventilators and testing kits, and sports stadiums and railway cars have been set up as isolation centers, it still may not be enough.

“The public and government almost had an expectation that the lockdown was going to eradicate the disease,” said Bhramar Mukherjee, an epidemiologist and biostatistics chair at Michigan University’s School of Public Health that’s part of the team modeling India’s epidemic. “It is becoming evident that the virus is not going away. This pandemic is like a wave and when one cascade of waves subside, others emerge.” 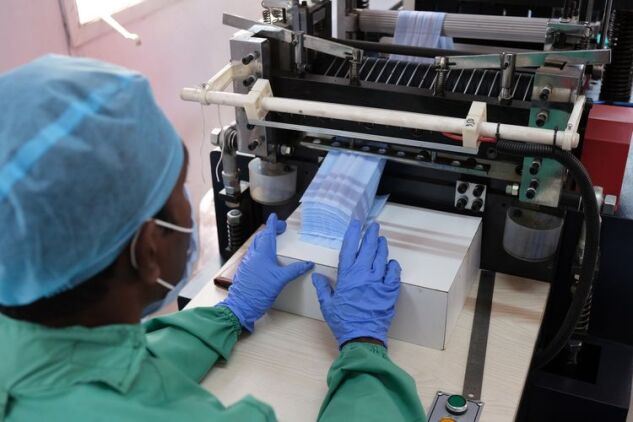 Mega-cities like New Delhi and Mumbai are already showing signs of being overwhelmed, with in hospital corridors and patients turned away for lack of beds. India currently has about 425,000 cases and 13,699 deaths, for a fatality rate of 3%. That compares to 5% in the U.S., which Indian officials say shows their approach is paying off.

India’s health ministry didn’t respond to a request for comment. But officials in India and Indonesia, which has the highest case tally in Southeast Asia, have that people may have to learn to live with the virus. Countries like India and the Philippines are now relying on other tactics such as using lockdowns only in specific communities where the virus is spreading vociferously.

A study on São Paulo, home to about 45 million Brazilians, conducted by the Solidary Research Network, a group of researchers from institutions including Universidade de São Paulo, found that if the state had kept the same social distancing rules that were in place in May for another 30 days, deaths would have risen at a slower pace to about 14,600 by July 8.

But these restrictions -- which included closing businesses, schools and many public places -- were eased in June. The research group now estimates deaths could reach nearly 25,000 by July 8.

While Brazil did not have a nationwide lockdown, various states imposed restrictions on people’s movements and some have now begun to ease quarantine orders. But there are a confluence of factors working against countries like Brazil, beyond a president who has been criticized for the seriousness of the pandemic. In the slums of São Paulo and elsewhere, extended families share one-room shanties and social distancing is a nearly impossible task. Lack of reliable clean water and sanitation systems also allowed the virus to take root.

“We have epidemics at different stages now depending on the location,” said epidemiologist Gulnar Azevedo e Silva of the Institute of Social Medicine at Rio de Janeiro State University. “We need to solve the problem of the first wave still.” 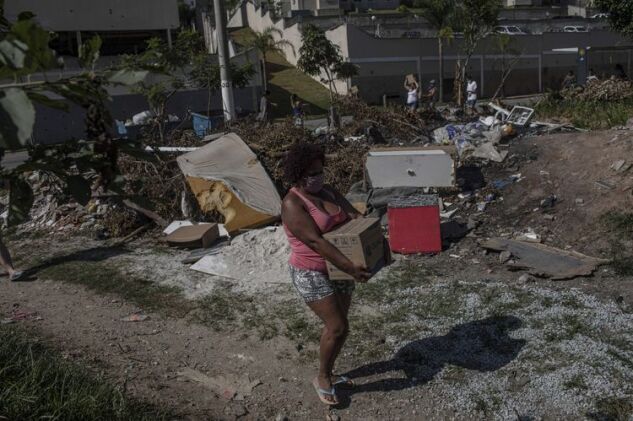 A resident carries a box of donated food and hygiene supplies in the Vale das Virtudes favela of Sao Paulo, on June 12.
Photographer: Victor Moriyama/Bloomberg

Emerging economies have already been among the hardest-hit from lockdowns, and worsening outbreaks could see further pressure on consumer spending and growth. The Philippines’ gross domestic product will likely contract as much as 3.4% this year, while India is its first economic contraction in 40 years.

The Organisation for Economic Co-operation and Development sees Brazil’s GDP contracting 7.4% this year, though it could shrink by as much as 9.1% if there’s a resurgence of the virus as the country reopens, the OECD says.

In sub-Saharan Africa, the region is reeling from its first recession in 25 years, according to the .

Nigeria, Ghana and Senegal have all seen virus cases spike over the past month. South Africa has more than 101,000 confirmed coronavirus infections and 1,990 fatalities.

South Africa’s government has also eased restrictions to salvage its economy. A court in the country also ruled that some lockdown regulations were unconstitutional. The case was filed by a human-rights group that said millions of already impoverished people were being deprived of an income by the curbs.

“Governments are faced with choosing between potential surges in infections and the potential starvation and deprivation of their population,” said Kobi Annan, an analyst at risk consultancy Songhai Advisory, based in Ghana and the U.K. “Longer-term lockdowns in developing countries are just not an option -- we don’t have social safety nets.”

(Updates with infection data for the Philippines)