Health industry leaders expect Congress will need to send billions of dollars more to hospitals and doctors this year, even before any of the $100 billion in emergency funds cleared last week have been doled out.

Health organizations are asking the Department of Health and Human Services to start dispensing the funds, part of the $2 trillion economic rescue package () signed into law Friday, as soon as possible to help keep afloat hospitals, health centers, and doctors’ offices that have been responding to the outbreak of the new coronavirus. Some want the agency to use the emergency fund to forgo collecting Medicare advanced payments, effectively allowing the government to pay doctors immediately through the public health insurance system. 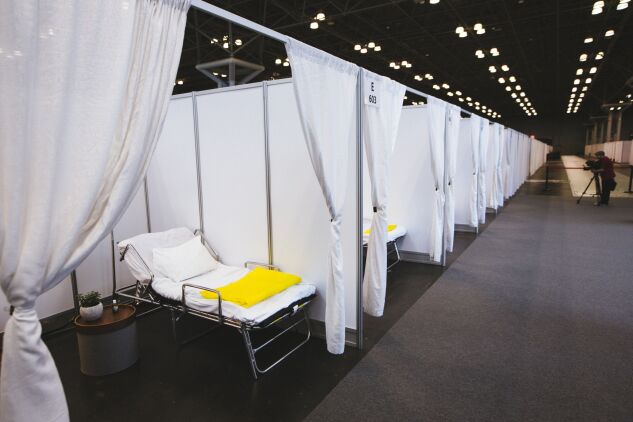 Rooms for patients are set up at a temporary hospital in the Jacob Javits Convention Center in New York.
Angus Mordant/Bloomberg

Hospitals and surgery practices in particular have been warning they’re short of cash needed to pay staff partly due to the halt on most elective surgeries, which are more lucrative for health-care providers than emergency services typically related to treatment for Covid-19. That need is so great it’s expected to exhaust emergency funding by this summer.

“I would not at all be surprised to see another bill that actually comes back and focuses on the health-care system and its finances,” said John Kelliher, managing director at Berkeley Research Group and a former chief counsel for the House Ways and Means Committee.

The $100 billion fund created by the economic rescue law was designed to cover “non-reimbursable expenses attributable to Covid-19" for any health-care organization that provides care, testing, or diagnosis for people who may have the virus, according to an explainer published by Sen. (D-Calif.).

The funds are supposed to be made available quickly and not dispersed via competitive grants, according to a senior Democratic aide.

Health-care groups are asking the HHS to send out the money immediately. The Medical Group Management Association on Friday asked the agency to send advanced Medicare payments and use the emergency funds to ensure doctors don’t have to pay any of the money back to the government. Normally under its advanced payments program Medicare gives doctors and hospitals in emergencies the chance to request three months of Medicare payments, but they must reimburse the government.

, vice president of legislative affairs for American’s Essential Hospitals, said it’s difficult to project how much hospitals will need, but noted that collectively they’re losing millions of dollars forgoing elective surgeries and spending millions of dollars on expanding capacity to deal with a rising number of Covid patients.

“More will need to be done to deal with the unprecedented challenge of this virus,” the head of the American Hospital Association, Rick Pollock, said in a statement.

Some hospital systems and health care organizations in areas of the country with the highest number of Covid-19 patients say they’re forgoing as many as half their normal number of patient visits.

James W. Hunt, Jr., president and chief executive officer of the Massachusetts League of Community Health Centers, which serves the state’s 52 health centers, said one of its members recently reported it had only enough money to operate for the next 10 days. He estimates that collectively the state’s community health centers have lost more than $115 million in revenue due to the outbreak over the past 12 weeks.

“Their situation is not nearly as dire as other American industries right now,” said Mark Pauly, a professor of business economics and public policy at the University of Pennsylvania’s Wharton School.

Total expenses across all 6,146 U.S. hospitals in fiscal 2018 topped $1 trillion, according to the American Hospital Association. Some major health-care organizations in 2019 were among the most-profitable companies in the industry; , posted profits of $51.336 billion in 2019, up almost $5 billion from the year before.

, president and chief executive officer for the National Association of Community Health Centers, which represents the hundreds of federally funded community health centers in the U.S., said in a statement that the coronavirus rescue bill included $2 billion less than they asked for their members. Community health centers are, like hospitals, taking losses from forgoing elective procedures to focus on Covid patients, he said.