The Food and Drug Administration will get new powers to regulate synthetic nicotine, found in e-cigarettes popular among teenagers, as part of a government spending bill slated to pass in coming days, a lawmaker confirmed on Tuesday.

The language in the omnibus spending package, a yet-to-be unveiled bill to fund the government through September, would give the FDA the authority to regulate products that contain nicotine but aren’t derived from tobacco, such as synthetic nicotine, according to a document obtained by Bloomberg.

Sens. (R-N.C.), (D-Ill.) and (D-Wash.), along with Rep. (D-N.J.) led the effort to get the language into the omnibus, according to two Senate sources familiar with the discussions. Lawmakers are racing to pass the bill before a March 11 deadline.

“This is an enormous win for public health and American consumers,” Pallone said in a statement. “I’m grateful to members on both sides of the aisle for working with me to close this loophole in the omnibus.” 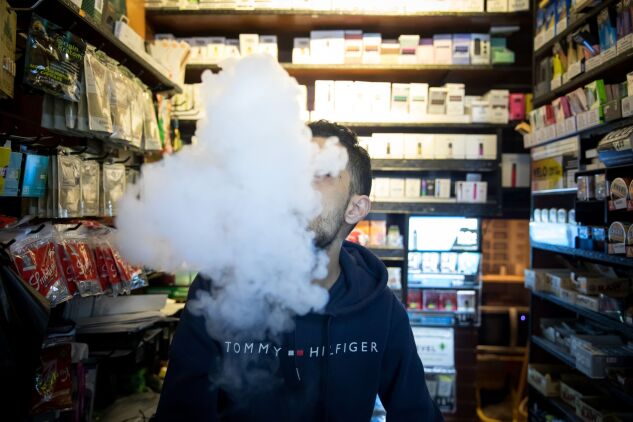 A person exhales vapor while using an electronic cigarette device at a smoke shop in New York on Jan. 8, 2020.
Photo: Michael Nagle/Bloomberg

The change will stop “bad actors attempting to evade FDA regulation and hook a new generation of young people into a lifetime of nicotine addiction,” Pallone said.

Public health groups have been warning that synthetic nicotine e-cigarettes such as Puff Bar have grown in popularity among teens while skirting FDA oversight. The FDA has authority to regulate natural tobacco products, but it’s unclear if that extends to lab-made nicotine.

“Youth are attracted to fruit and candy flavors and are quickly addicted to harmful e-cigarettes,” Wimmer said.

More than a quarter of middle and high school e-cigarette users reported using Puff Bar as their usual brand, according to a survey from the Centers for Disease Control and Prevention. Puff Bar didn’t immediately respond to a request for comment.

“Synthetic nicotine poses a new and growing threat to the health of our nation’s kids,” Matt Myers, president of the Campaign for Tobacco-Free Kids, said in a statement.

The same survey found brands that use traditionally derived nicotine, such as those sold by Vuse, SMOK, and , are also popular among teens, even though people under age 21 can’t purchase them legally.

(Updates throughout with additional reporting.)

To contact the reporters on this story: in Washington at aruoff@bgov.com; Riley Griffin in New York at rgriffin42@bloomberg.net