An employee walks past a wall at Facebook that includes quotes from employees that reflect mental health. Facebook and other companies are encouraging more openness around the issue, especially as the coronavirus pandemic continues.
Provided by Facebook

Construction companies in Northwest Ohio, increasingly worried about their employees’ mental health, are embracing “2 Tuff 2 Talk,” a suicide prevention program to help construction workers and their families navigate mental health issues and educate front-line supervisors in how to deal with those who may be having problems.

In 2019, 1,061 construction workers died from work-related injuries, while about 5,500 workers died of suicide, Babette Burnett, director of health and safety for the Spieker Company, a general contractor in Northwood, Ohio, said in an interview.

The construction industry isn’t alone. Companies are increasingly trying to go beyond health plan benefits to encourage employees to communicate about mental health problems and seek resources for help.

The Covid-19 pandemic has led to a surge in mental health claims for employers. Even so, getting workers to acknowledge they’re having a problem and seek help is a major challenge many companies are trying to tackle, both because they want employees to get the care they need and because they are concerned about retaining their workers. Even those in fields like construction, where tough workers often aren’t inclined to talk about mental health problems, are seeing the benefits of more open discussion.

‘Where Are We Going Wrong?’

“In 2016 I had a female carpenter apprentice commit suicide,” Burnett said. “I watched how it affected my crews in field, the cost and finance of it, the emotional part of it,” she said.

That led her to help form the 2 Tuff 2 Talk program through the Associated General Contractors of Northwest Ohio Inc. It’s finally getting off the ground after being delayed by the pandemic. Member companies employ about 12,000 workers. The group wants to provide mental health advocates on job sites and grants for people who need financial help for care.

“Especially since Covid even, the mental health awareness out there is everywhere,” Burnett said. “For our industry, the awareness is there, the education element is already there,” she said.

“If all of this is there, where are we going wrong?” in reducing the industry’s suicide rate, she said.

Employers in many industries are looking at their cultures to ensure they’re more conducive to supporting mental health, and making sure employees get support and access to care when needed, Darcy Gruttadaro, director of the American Psychiatric Association Foundation’s Center for Workplace Mental Health (CWMH), said in an interview.

“Just acknowledging that right now people are experiencing depression and anxiety at almost triple and quadruple the rate they typically are—the symptoms of those conditions—that should be something employers are aware of,” Gruttadaro said.

Employers are going through a transition as employees come back to workplaces, and many are worried about people leaving, Gruttadaro said. “It’s important to be flexible, and to communicate openly and often with employees about their needs,” she said. “Flexibility is the word of the time right now.”

Of course, employers have long struggled to control health-care spending, and adding to their mental health efforts could increase costs.

“It’s kind of all over the board as far as what’s offered and what the cost implications are,” Gruttadaro said. She estimated employers spend anywhere from $20,000 to $100,000 on resources linked to workplace mental health.

The CWMH has produced a Returning to the Workplace Guide, as well as a guide to help managers recognize and respond to employees who are having mental health problems. 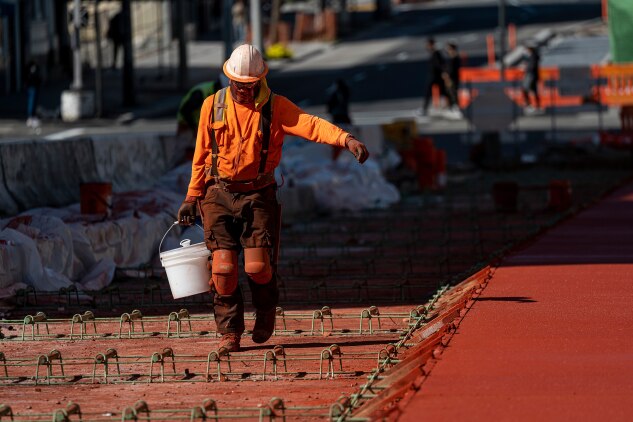 A contractor carries a bucket on a portion of Van Ness Boulevard under construction in San Francisco, Calif.
Photographer: David Paul Morris/Bloomberg via Getty Images

Stressful to Body and Mind

In the construction industry, there are many barriers to people seeking help, Cal Beyer, vice president of workforce risk and worker wellbeing for employee benefits company Holmes Murphy & Associates, said in an interview.

“It’s a very tough-oriented industry,” Beyer said. But the industry has made strides in recent years, he said.

“What I’ve seen companies doing is increasingly talking about mental health, acknowledging that we have risk factors, that our work is stressful to the body and our minds,” said Beyer, a member of the executive committee of the National Action Alliance for Suicide Prevention.

The construction industry’s high suicide rate is affected by the fact that it’s dominated by men, who have a higher suicide rate than women, Burnett said.

Physical labor is hard on the body, which can lead to substance abuse, and many workers have to travel for work, leading to problems caused by absenteeism from families, Burnett said.

The Cianbro Companies, a general contractor based in Pittsfield, Maine, has seen its efforts encouraging workers to be open about mental health needs pay off, Michael Bennett, vice president, said in an interview. Cianbro has about 4,000 employees in the U.S.

“Big tough men and women work in this industry and you leave your emotions at the door,” Bennett said.

Instead of talking directly about mental health, Cianbro uses the analogy of a backpack, Bennett said. “When you get up and go to work, the company’s putting things in your backpack. It’s called work.”

“Over the years we now will actually have people referencing what’s in somebody’s backpack,” Bennett said. The company uses the analogy to try to influence workers to make healthy choices, including seeking mental health when needed.

“It is paying off,” Bennett said. “I’ve had five discussions in the last six weeks with individuals that are dealing with anxiety and depression.”

Reaching Out to Others

Companies in many industries are focusing more on encouraging managers or coworkers to reach out to fellow employees who appear to need help.

Facebook started its #OpenUp program in 2017 based on research showing that “the best way to reduce stigma is for people to actually connect with one another” about their mental health experiences, Clare Miller, mental health benefits manager, said in an interview.

Focusing on symptoms and treatment are important, but to reduce stigma it is more helpful to have “personal connections to people who have these lived experiences,” Miller said.

The company invited its more than 60,000 “Facebookers,” what it calls its employees, to share experiences by posting openly about them on their online work sites called Workplace, its primary communication channel. The hundreds of stories posted range from feeling resilient by practicing healthy habits to experiencing serious mental health issues such as bipolar disorder, depression, or anxiety, Miller said.

Facebook posts #OpenUp quotes at art installations in its more than 80 campuses across the world, Miller said, and more than 200 stories have been posted on its work place websites.

‘The Stigma Is Eroding’

Over the nearly five years that We Care has been in place, use of confidential counseling services is more than four times higher than when the program began in October 2016, Weiner said. “We believe that that’s a strong indication that the stigma is eroding.”

“We want our people to feel empowered to be able to engage a colleague in a conversation, asking them, ‘Are you OK?’” if they notice changes, Weiner said.

“It doesn’t mean that the person has a mental health issue,” Weiner said. But a colleague may notice changes that could raise concerns.

“All of that is to hopefully drive awareness and comfort that no matter what’s going on in your life, that we need to bring our whole selves to work; that it’s OK to ask colleagues if you notice that they’re having a struggle, and to encourage support,” Weiner said.