Robert Califf said Tuesday he would open up an extensive review of opioid regulations if he is confirmed by the Senate to lead the Food and Drug Administration.

President Joe Biden’s FDA nominee made the pledge in response to grilling from members of the Senate Health, Education, Labor and Pensions Committee over the agency’s role in addressing the opioid epidemic.

Lawmakers have long criticized the FDA’s approval of OxyContin and other addictive drugs without requiring more thorough warning labels and other protections that could help combat misuse.

“I am committed to do a comprehensive review of the status of opioids early in my tenure,” said Califf, who previously led the FDA during the Obama administration, at Tuesday’s confirmation hearing. He added that the review would include the agency’s labeling process and whether warnings accurately describe the safety risks associated with the drugs.

The opioid epidemic has become a sticking point for some Senate Democrats who have vocalized their opposition to Califf’s nomination. The lawmakers say that Califf’s longstanding ties to the drug industry could get in the way of aggressively combating the crisis.

Drug overdose deaths increased by 28.5% in the 12-month period ending in April, according to provisional data from the Centers for Disease Control and Prevention.

Sen. (D-W.Va.), who opposes Califf’s nomination, said in a statement Tuesday that Califf’s “significant ties to the pharmaceutical industry take us backwards not forward.”

“His nomination is an insult to the many families and individuals who have had their lives changed forever as a result of addiction,” Manchin said. 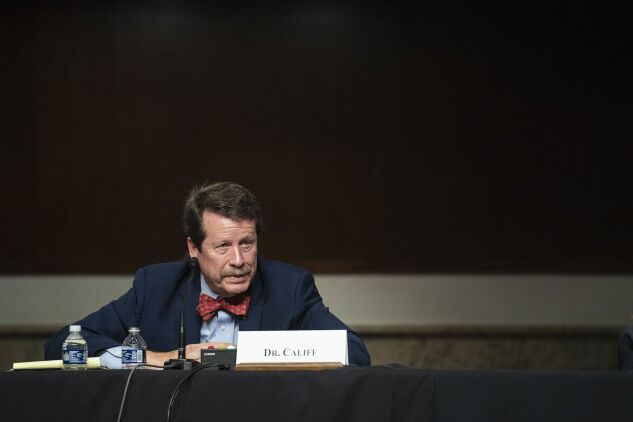 Robert Califf, nominee to be commissioner of the Food and Drug Administration, speaks during a Senate Health, Education, Labor, and Pensions Committee confirmation hearing on Tuesday, Dec. 14, 2021.
Photographer: Sarah Silbiger/Bloomberg

Several Democrats at the hearing took aim at the FDA’s approval of the pain reliever OxyContin and subsequent labeling that lawmakers say made it easier to prescribe the drug for long-term use.

When asked by Sen. (D-N.H.) if the FDA made “a mistake” by approving OxyContin in 1995, Califf said that “approving oxycontin with no long-term studies and no assessment of the addictive capabilities is something that could have been done differently.”

“I’m an evidence-based person, and if we’re going to instruct people to take drugs for long periods of time, we need long-term studies,” Califf said.

Hassan pushed for Califf to commit to changing the agency’s labeling guidance for opioids. She noted that in 2001, Purdue Pharma relabeled OxyContin to say that it could be prescribed as an extended treatment, and not just for short-term use.

The FDA in 2001 also put in place additional safety guidance and measures to help increase awareness on the potential dangers of opioid use. The label also changed to say that OxyContin isn’t appropriate for “as needed” pain or “in the immediate-post operative period if the pain is mild or not expected to persist for an extended period of time,” according to the agency.

“As the evidence comes in we are going to need to aggressively look at relabeling,” Califf said.

Sen. (D-N.M.) also emphasized the danger approvals of opioids without accurate and extensive safety data could pose for Americans.

“I am sick and tired of the United States approving one opioid to fix another,” he said. “This is stupid. People are dying because of it.”