Blue-state governors and politicians hailed their commitment to reproductive rights following the Roe v. Wade leak on Monday, inviting residents of states with restrictive abortion access to seek care inside their borders instead.

“I refuse to let my new granddaughter have to fight for the rights that generations have fought for & won, rights that she should be guaranteed,” New York Governor said on Twitter on Monday. “For anyone who needs access to care, our state will welcome you with open arms. Abortion will always be safe & accessible in New York.”

New York is among Democratic-leaning states that have codified the right to abortion in state law in anticipation of Roe v. Wade getting overturned. That proposition came much closer to reality after a leaked copy of an initial draft majority opinion showed the U.S. Supreme Court poised to strike down the half-century-old precedent. Meanwhile, states like Florida and are feverishly passing more restrictive abortion bills.

“When we saw the changes happening on the national landscape at the end of last year’s legislative session, it was really clear that we were going to need to do something big this year,” Maryland state delegate Ariana Kelly, who pushed for a recently passed law that allows nurse practitioners, midwives and physician assistants — not just doctors — to perform abortions, said in April.

It was the first time the state had passed legislation related to abortion in three decades. But with the Supreme Court expected to rule this summer on a Mississippi case that could , states on both sides of the aisle launched into action. 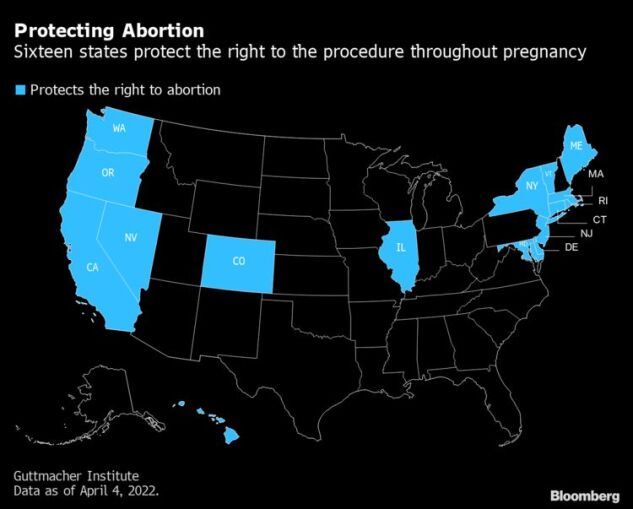 Until now, Maryland was among more than 30 states that required that the procedure be performed only by physicians, according to the Guttmacher Institute, which researches sexual and reproductive health. Professional medical organizations have said that it is safe for other trained providers to perform abortions. The Maryland law also requires insurance to cover the procedure with no out-of-pocket cost to patients.

California Governor on Tuesday said the state couldn’t “trust SCOTUS to protect the right to abortion, so we’ll do it ourselves,” in a Twitter post outlining a proposed amendment to codify abortion rights in the state constitution. The state in March eliminated out-of-pocket costs for abortion. Newsom, a Democrat running for re-election, reminded residents that the state’s primary is June 7, saying that “elections matter.”

After the leaked ruling, New Jersey Governor Phil Murphy assured New Jerseyans that striking down Roe v. Wade wouldn’t change access to abortion in the state. New Jersey codified the right to an abortion in state law earlier this year. The state “will not go backwards on reproductive rights,” Murphy said on Twitter.

In Connecticut, which passed state laws granting abortion rights in 1990, Democratic Governor Ned Lamont said the state would do “everything in our power to defend abortion.” Last month, state lawmakers passed a bill intended to protect Connecticut’s abortion providers from out-of-state lawsuits.

Michigan Governor Gretchen Whitmer, who filed a lawsuit asking the state Supreme Court to overturn a 176-year-old state abortion ban that would go into effect if Roe is overturned, promised to “fight like hell to make sure abortion safe, legal, and accessible in our state.” The Democratic governor, who is up for re-election in November, also reminded voters that abortion access is “at stake this November,” and solicited donations. “Contribute $5 to our campaign to help safeguard reproductive rights in Michigan,” she wrote on Twitter on Monday.

Blue states have also sought to position themselves as safe havens for residents in red states that have made abortion access more restrictive. Texas’s S.B.8 in September made abortions after illegal and deputized private citizens to bring civil lawsuits against anyone they suspect or know broke the law. In April, Kentucky ended virtually all in-state abortions with onerous requirements for the state’s two remaining providers. Oklahomabanned the procedure except in a medical emergency.

Oregon has allocated $15 million to support abortionpatients, health providers and community advocates. If a 15-week ban were to stand following the pending Supreme Court decision, the number of people whose nearest abortion provider would be in Oregon would jump by 234%, according to Guttmacher.

Oregon House Speaker Dan Rayfield, who led the bill, said in April that the step — one of many the state has taken in recent years on this matter — is “trying to just frankly, be responsive to the changing landscape that we’re going to see in the future.”

But many people won’t be able to travel in order to get an abortion. More than 40 million women between ages 13 and 44 live in states with restrictive abortion rights, costing those economies $105 billion annually by cutting labor force participation and earnings, according to the Institute for Women’s Policy Research. Women who want an abortion but don’t get one are four times more likely to live below the federal poverty level, according to the University of California San Francisco.

“The people who struggle the most to access care are those who are already most marginalized and who are facing the most significant barriers to health care across the board,” Roxanne Sutocky, director of community engagement at the Women’s Centers, which operates abortion clinics in New Jersey, Connecticut, Pennsylvania and Georgia, said in April.

To contact the editor responsible for this story:
at sbanjo@bloomberg.net