President ‘s move to allow Veterans Administration hospitals to provide abortions probably won’t immediately improve access to the procedure nationwide, even if it stands up to legal challenges.

Veterans and some of their direct family members can get abortions at a Department of Veterans Affairs facility if carrying the pregnancy to term threatens their life or health, according to the policy posted last month. They would also be eligible if the pregnancy is the result of rape or incest, matching what military hospitals provide active and certain retired service members.

But that makes the VA’s criteria only slightly less restrictive than the stricter laws governing abortions for civilians in states such as Texas or Alabama, where abortion is illegal except if the patient’s life or health is in danger.

So far, the new effort hasn’t gained much traction. The VA performed just one abortion as of Sept. 21, about three weeks after the department first announced the offering, VA Secretary said in a Senate hearing. But it has already stirred public opposition from critics, in what could be a sign of a court challenge to come.

The limits of the VA’s new policy also highlight how few tools Biden has to significantly increase access to abortion without support from Congress and friendly judges. And even though the administration insists VA physicians would be protected from state laws seeking to punish doctors for performing abortions, a court has yet to weigh in.

The department estimates that 155,000 veterans who use VA healthcare are of childbearing age and live in states with abortion bans or significant restrictions.

“We’re getting to a legal brinksmanship,” between states and the US government over whether the VA should be absolved from following state laws, said Delphine O’Rourke, a partner at Goodwin Procter LLP who specializes in women’s health.

The VA is promoting its new abortion services on its website; patients can also get information about the policy by asking women’s health advisers at any facility or calling the department’s help line.

VA facilities offered pregnancy, delivery, and postpartum services before the fall of Roe v. Wade but they were limited, often by lack of specialists on staff.

Patients are typically sent to nearby doctors for maternity care instead of seeing VA physicians and the VA covers the cost, according to its website. 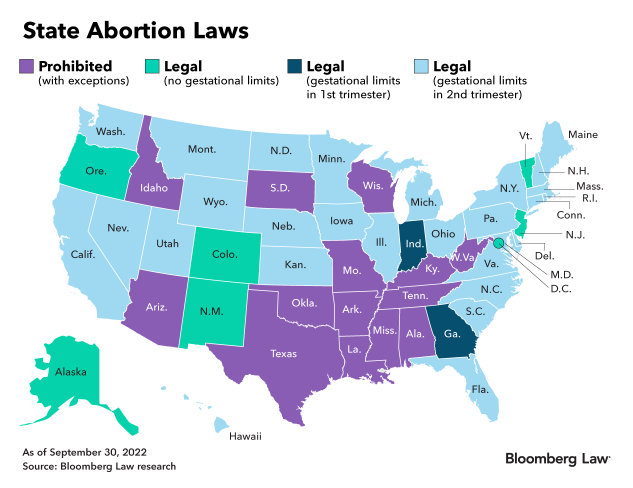 The North Texas VA Healthcare System, for example, went more than a year without a gynecologist, the agency’s inspector said in an early 2020 report. The system serves more than 195,000 veterans in Texas and Oklahoma, according to its website.

VA hospitals only started caring for newborns after delivery in the early 2010s, drawing more pregnant patients to the department’s facilities.

Allowing the VA to offer abortions enables doctors-in-training to learn about the procedure, O’Rourke said, adding that the VA is the largest provider of medical education in the country.

McDonough, who heads the VA, said that his team last month began training more physicians to perform the procedure.

That’s particularly significant in states where that opportunity would otherwise be limited by state laws or physicians themselves. Prior to the fall of Roe, fewer than one in four US obstetricians were willing and able to perform surgical or medication abortions, according to a 2017 survey from the American College of Obstetricians and Gynecologists. The most common reasons for not providing medication abortion: personal beliefs and practice restrictions that make it difficult to do so.

A quick option to expand access would be for the VA to prescribe or cover the cost of the two pills that can be used to terminate a pregnancy, said Lory Manning, a retired Navy captain who now works at Service Veterans Action Network, a women’s military group. VA pharmacies, for example, may already have the medicines on hand because they are sometimes used to treat other conditions. Research has shown that people can safely use the pills on their own.

The number of female veterans using VA services has tripled since the Sept. 11 attacks, when thousands of women enlisted. VA patients tend to be in their later reproductive years because they are retired from service and less likely to need maternity care, unlike the typical patient population at military hospitals. Nearly half of active duty members are 25 or younger, according a 2018 Department of Defense report.

In a preview to a potential legal challenge, two Catholic groups argued in a Sept. 21 letter to the VA that the agency exceeded its authority and doesn’t have lawmakers’ permission to help patients terminate a pregnancy.

If the Biden administration’s move is challenged in court, a judge would need to decide whether an abortion in certain circumstances is “needed” medical care, allowing its doctors to perform the procedure regardless of state restrictions, said Laura Portuondo, an attorney who studies reproductive health at Yale University.

The conservative-majority Supreme Court has pushed back repeatedly on Biden’s attempts to expand the scope of the federal government’s involvement in healthcare without approval from Congress, including when the high court blocked the president’s Covid-19 vaccine-or-test rule in January.

The court’s response to Biden’s separate effort to ensure access to abortions in medical emergencies has so far been mixed, with judges in Idaho and Texas rendering conflicting decisions. Alabama’s attorney general threatened to punish VA physicians who perform abortions in cases of rape or incest.

The Justice Department says it will represent VA doctors if they are prosecuted for violating state law.

“States may not impose criminal or civil liability on VA employees, including doctors, nurses, and administrative staff, who provide or facilitate abortions or related services,” Assistant Attorney General Christopher Schroeder said in a memo.

To contact the editor responsible for this story: at bkohn@bloomberglaw.com
and at jmartin1@bloombergindustry.com