A nurse practitioner uses a pulse oximeter on a patient at her home.
Photographer: John Taggart/Bloomberg via Getty Images

President Joe Biden’s call to spend $400 billion to expand home and community-based care is raising advocates’ hopes that Congress may finally address long-standing challenges the industry, the elderly and people with disabilities face.

Many Americans languish on waiting lists for home care under Medicaid, the main payer for home and community-based support. Wages remain low for home-care workers in demanding jobs. has signaled he wants to handle these costly issues side-by-side.

“This is a bigger investment than anything we’ve seen in recent years and it’s probably not enough,” Robert Espinoza, vice president of policy for PHI, a nonprofit research group tracking the home-care sector, said. “It’s promising and could be a big step.”

The U.S. spent $379 billion in 2018 for long-term services and support—which are used to help seniors and people with disabilities with anything from preparing meals to bathing and dressing, and managing medication or mobility, according to the Kaiser Family Foundation. Medicaid paid for more than half of this, which include nursing home and home health services. 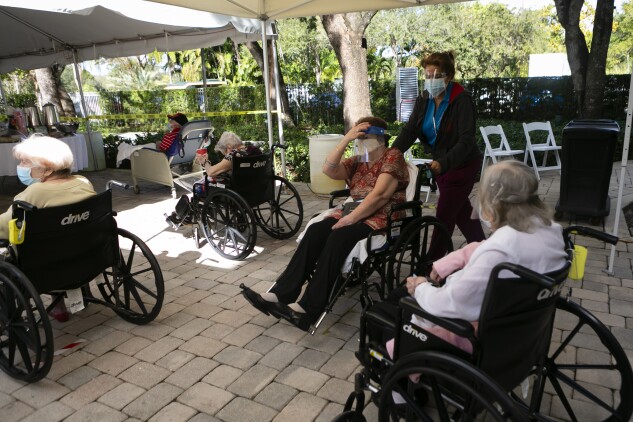 Demand for these services is increasing. Home-health aides and personal-care aides represent the sixth-fastest growing occupation in the country, according to Labor Department data, and pay about $12.15 per hour, or $25,280 per year.

In many areas that pay is not enough: Most home-health aides qualify for federal help such as food assistance and Medicaid, research byPHI shows.

Espinoza said the money should go to raising wages for home care workers as well to employers to improve training. States also need funds for their Medicaid programs if they’re to expand their home care services, he said.

Lawmakers crafting the final details likely will need to meet the demand of budget reconciliation, which allows the Senate to pass legislation with a simple majority. Republicans have scoffed at the high price tag for Biden’s infrastructure proposal and his call for raising some taxes to pay for it.

Demand for home health services is already high: almost 820,000 people in the U.S., most of them people with intellectual or developmental disabilities, are on waiting lists to get home or community-based care.

“We all should work to remove any barriers to home care, including unnecessary care waiting lists and insufficient caregiver compensation,” Thomas Threlkeld, a spokesman for the National Association for Home Care and Hospice, said.

The government could shrink or eliminate waiting lists by making home support and care services mandatory for Medicaid programs, which are funded by a combination of federal and state funds and run primarily by individual state governments, Ari Ne’eman, a senior research associate at the Harvard Law School Project on Disability, said. That change would likely need to be paired with added money.

Currently states are required to provide people on Medicaid access to institutions, such as nursing homes, if needed, but not home-based care, Ne’eman said. States have the option to set up their own models for delivering home services to those who don’t want to enter long-term care facilities.

“Some people are on these waiting lists for years,” he said.

The problem has only been exacerbated by the spread of Covid-19, which hit nursing homes and other congregate care settings hard, Ne’eman said.

“If there’s one big takeaway from Covid: you do not want to get stuck in a nursing home,” he said.

To contact the editors responsible for this story: at rmeszoly@bgov.com; at hrothman@bgov.com