The U.S. will begin giving Covid-19 booster shots to millions of Americans on Friday — a watershed moment in the nation’s battle against the pandemic that officials hope will beat back another brutal winter wave of infections.

But even after months of internal debate between political appointees and health and science officials in the Biden administration, little consensus has emerged on whether widespread boosters are medically necessary or morally just.

President Joe Biden has endured opprobrium abroad for his aggressive effort to get a third shot into the arms of American adults before much of the world has received even one dose. However, it’s a politically popular policy in the U.S., where many fully vaccinated people fear “breakthrough” infections — even though data suggest they cause mostly mild illness.

Thursday laid bare how split experts remain on the use of boosters. A Centers for Disease Control and Prevention advisory panel unanimously backed the shots for those aged 65 and up, but voted against them for people ages 18 to 64 in jobs or settings where they’re at risk of becoming infected — a group that includes tens of millions of people and encompasses health-care staff and retail workers. Later in the night, CDC Director Rochelle Walensky overruled them, restoring the 18-to-64 workplace category to the eligible groups.

The administration’s booster planning dates back to the start of this year, when federal health officials and a Trump administration holdover concluded that two shots might not be sufficient long-term protection against the virus.

That foresight, however, has run up against the inadequacies of the U.S. pandemic response.

Bloomberg’s reconstruction of the administration’s booster-shot planning is based on interviews with people familiar with the process who asked not to be identified discussing confidential deliberations. Many details have not been previously reported, including how the plan was developed by a tight-knit group of Biden advisers within the White House, and their efforts to prod regulators to speed their review.

The administration also weighed early on whether to mix and match different manufacturers’ shots, and shelved plans to order another 100 million doses of Johnson & Johnson’s vaccine, in part for boosters, after the company experienced production and safety issues.

A tight circle of senior Biden aides have driven the push for boosters, blurring lines of authority between the White House, the Food and Drug Administration and the CDC.

The administration’s Covid-19 response is led by , one of Biden’s closest aides. All decisions run through him, several of the people said, and he’s been heavily involved in the booster plan. David Kessler, the former Food and Drug Administration chief who serves as a science adviser to the White House, is also central to the effort. He speaks regularly with the vaccine manufacturers, including Pfizer Inc., about supply agreements, boosters and other subjects.

The Pfizer-BioNTech SE and Moderna Inc. vaccines require two doses, spaced three and four weeks apart, respectively. But, there were always questions about how long the protection would last.

After Biden took office in January, his aides and General Gustave Perna, who helped run Donald Trump’s Operation Warp Speed vaccine program and had stuck around through the change in administration, soon decided there was little chance the two-shot regimens would be durable enough.

They began planning for the possibility of a booster campaign that would roll out in October, to curb another spike in cases around the Thanksgiving holiday.

Biden began ordering hundreds of million more doses of the vaccines than required to fully vaccinate the U.S. population, partly in anticipation of boosters. That included a March 10 announcement to double the U.S. order for J&J’s one-shot vaccine, to 200 million doses.

But J&J became mired in production delays at a contractor, Emergent BioSolutions Inc., and only this week completed delivery of its first 100 million doses that had been promised by the end of June, a delay partly due to how long the FDA has taken to sort through the Emergent debacle. There’s low demand, too — less than 15 million people got J&J in the U.S., leaving plenty to use as boosters.

The administration quietly shelved its plan to buy the second 100 million J&J doses, the people said. A J&J spokesman said the total U.S. order is 100 million. 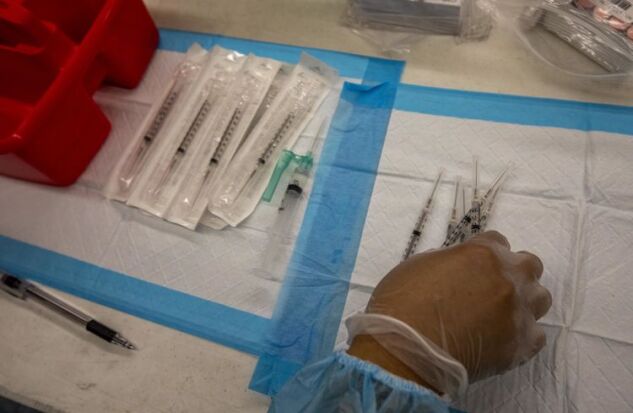 As the Biden administration began to lay the groundwork for boosters in the spring, there was a crucial missing element: data.

It wasn’t clear how often vaccinated people were infected, how sick they got, who might need a booster or when it should be administered. Officials considered a mix-and-match booster strategy, in which patients would get a shot of a different vaccine than their original course. The data remain unclear; even now, a National Institutes of Health trial is ongoing on mixing.

As spring arrived, the timeline and strategy for boosters was still unclear. “Quite frankly, we don’t know the answer to that right now,” Anthony Fauci, Biden’s top medical adviser, said at a May 25 press briefing.

The CDC cautioned internally against any early warning about boosters, suggesting no public comments be made about third doses until more data was in hand, some of the people said.

While the agency had a handful of booster studies in the field, only a few had produced results by early summer — and they didn’t account for the highly contagious delta variant that would become the dominant U.S. strain.

“We have such a pathetic inefficiency to collect data,” said Eric Topol, director of the Scripps Research Translational Institute.

In July, data began emerging from Israel — which relied heavily on Pfizer, and was able to monitor effectiveness and breakthrough cases in near-real time — showing waning protection, alarming White House officials. Fauci warned publicly about that risk on Aug. 2.

The U.S. continues to rely in part on Israeli reports as it makes booster decisions. cited Israeli data in arguing for boosters, and representatives from Israel’s vaccine campaign and one of its universities presented data at an FDA meeting on Sept. 17.

In early July, debate about whether to go ahead with the booster plan accelerated. The head of the FDA division that oversees vaccines, Peter Marks, led a series of weekly meetings. FDA acting commissioner soon joined the sessions, which produced a steady drumbeat of warnings that echoed up to the medical experts advising the president. But the data were still murky.

“No American needs a booster now,” Biden said on July 29. “But if the science tells us there’s a need for boosters, then that’s something we’ll do.”

By August, the circle had widened to include senior Biden health aides, culminating in a morning virtual meeting on Aug. 12. The principal figures on the call were all physicians.

The group began working on what would, a week later, become a joint statement of the administration’s booster plan. They discussed setting an age cutoff for boosters, but decided to say that all Americans would be eligible — a month before the FDA would even consider authorizing the extra shots.

The group worked on the statement through the weekend and the following week, alarmed by two trends — more data showing declining effectiveness of the vaccines, and the rapid spread of the delta variant that was driving a new wave of cases. In the week after the Aug. 12 call, a million people in the U.S. tested positive for Covid-19 and 7,237 died. 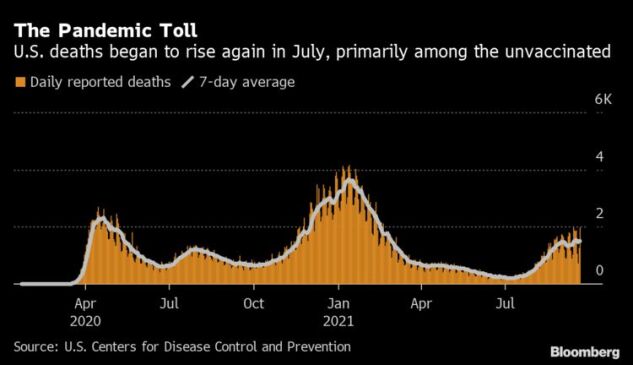 Released on Aug. 18, the administration’s booster plan was framed as the position of doctors advising the president — an attempt to signal that medicine, not politics, was driving the decision. But many Department of Health and Human Services officials close to the Covid vaccination effort hadn’t been briefed.

“We are prepared to offer booster shots for all Americans beginning the week of September 20 and starting 8 months after an individual’s second dose,” the advisers said in the statement. While they made clear that the plan was subject to FDA and CDC authorization, the top officials at those agencies signed onto the document.

“Our worry, looking at the trends and the data, was that we would likely see a reduction in the protection against hospitalization and death in the months ahead,” Surgeon General Vivek Murthy, one of the statement authors, said in an interview. “We had to be forthcoming with what we saw.”

But shortly after, FDA’s Woodcock and the CDC’s Walensky each privately warned of delays that meant it was unlikely that they could start boosters with anything other than Pfizer.

Less than two weeks later, the internal tensions burst open. Two FDA officials, Marion Gruber and Phil Krause, who helped lead the agency’s vaccine program, . They had been among a small group that pushed back against the Trump administration’s pressure on the FDA to move faster to authorize the vaccines, according to one person. Now they were jointly resigning just as Biden’s top health staff and political appointees were pushing for widespread boosters before all the evidence had come out.

Gruber and Krause haven’t respond to requests for comment and haven’t spoken publicly about their resignations. But they were not included in the White House group’s discussions of boosters, some of the people said.

In September, Gruber and Krause signed on to an articlein the Lancet, a medical journal, arguing against boosters. They soon saw some vindication: An FDA advisory panel last week rejected widespread booster shots, and instead recommended a more targeted program. And on Thursday, at a CDC panel charged with writing guidelines for how the shots will be used, speaker after speaker cited the lack of data on whether they’re needed widely. Instead of boosters for “all Americans,” as Biden’s team sought, the shots would be limited to only a high-risk slice of the population.

More booster debates loom. The FDA has yet to authorize third Moderna shots, which could reopen the discussion about who is eligible. The fate of those who got J&J remains unclear; some within the administration have grown concerned by data showing the one-shot vaccine’s protection is fading, too, the people said.

The CDC advisory panel’s recommendations — hours before the director overruled one of them — make clear just how fraught these decisions are. Members of the panel described themselves as conflicted as they voted down a guideline that would have opened eligibility to healthy people ages 18 to 64 who are in high-risk jobs or settings, the group that Walensky ultimately cleared.

“I don’t think we have the data in these younger age groups to make a decision for a booster dose,” said Lynn Bahta, a panel member and the clinical expert for vaccines at the Minnesota Department of Health.

Bahta said she worried that telling millions of healthy people that they need a booster would send the message that the vaccines do not work: “That’s how the message will be conveyed.”

Walensky acknowledged the shortcomings of the patchwork data in explaining her decision to clear the shots for a broader group.

“We are tasked with analyzing complex, often imperfect data to make concrete recommendations that optimize health,” she said in a written statement. “In a pandemic, even with uncertainty, we must take actions that we anticipate will do the greatest good.”

To contact the authors of this story:
in Washington at jwingrove4@bloomberg.net

in New York at rgriffin42@bloomberg.net