Xavier Becerra will become the public face of the administration’s health agenda after the White House and fellow Democrats spent two months putting President Joe Biden’s stamp on the nation’s pandemic response without him.

The Senate confirmed Becerra as Health and Human Services Secretary on a 50-49 vote Thursday.

Becerra joins the HHS less than a week after Biden signed legislation to expand the Affordable Care Act for the first time, and now those provisions are largely up to the health agency to implement.

Meanwhile, the White House has held almost-daily briefings with key members of the Covid-19 response team. Becerra will have a role in that effort, although what form it takes will evolve over time.

Those two factors make it clear that Becerra will be a central player in the Biden administration and focal point for opponents. He was confirmed with the support of only one Republican, Sen. (R-Maine). Conservatives questioned his qualifications for the job and accused him of being overly partisan during his time as California’s attorney general. 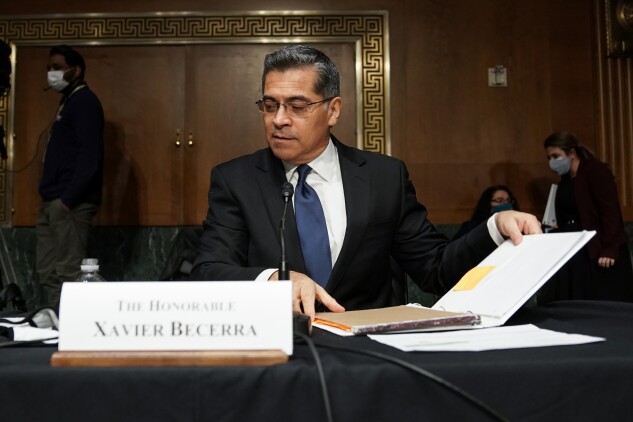 Xavier Becerra, nominee for Secretary of Health and Human Services, is seen at the start of a break during his confirmation hearing before the Senate Finance Committee on Capitol Hill on February 24, 2021 in Washington, D.C.
Greg Nash-Pool/Getty Images

Democrats acknowledge that some health issues are partisan, namely the ACA, but they hope Republicans will work with them and Becerra on drug pricing legislation and local health issues.

“They’re all going to need to work with him soon,” Sen. (D-Va.) said. “Certainly their states are going to need a working relationship with HHS.”

Becerra could also be called on to respond to congressional inquiries if Republicans win control of the House in 2022 and turn their attention on what they see as failures in Biden’s pandemic response and other areas.

Biden HHS Pick Becerra Assures Republicans on Medicare for All

Becerra is expected to put significant effort into addressing health equity issues that have come to the forefront during the Covid-19 pandemic and the national reckoning over structural racism.

He called federally funded health clinics “indispensable” in getting Covid-19 vaccines to underserved communities during his confirmation hearings. Biden’s administration has expanded vaccine distribution to the clinics for low-income people, but it will be up to the HHS to ensure that vaccination rollouts are smooth.

“Too many people are missed, they fall through the cracks,” Becerra said. “With community clinics able to help provide the vaccines, that makes it more possible for many of our families who’ve often been left behind to actually get the care and the protection they need.”

Other than in confirmation dialogue, Becerra hasn’t been a highly active figure in the pandemic response. As California’s attorney general he defended Democratic Gov. Gavin Newsom’s Covid-19 restrictions in court and pushed to provide information on its virus-related worker safety conditions.

Becerra’s top priority will be expanding the ACA as far as possible within the bounds of the law.

“If the goal is to put in charge the person who has led the fight against rollbacks to the Affordable Care Act and implementation, I think Becerra personally knows all of the ways that has been done,” Katie Keith, a health law professor at Georgetown University, said.

“I can’t think of a better person who understands all of the work that has to be undone,” she said, referring to several Trump-era rules that weakened the health-care law that Becerra and others challenged in court.

Becerra has been a “very active and forceful defender of good public policy, and that’s what we need right now,” former Centers for Medicare and Medicaid Services Administrator Don Berwick said. The Biden administration’s objective should be to use every tool possible within existing laws to extend health-care coverage as much as they can, he said.

“He would know better than anybody how to best insulate policy changes from legal challenges,” Keith said. “He has the mind for how opponents are going to come in and undo what he’s doing because he has sort of used that playbook.”

As Covid-19 dissipates, high drug prices will return to the forefront of policy discussions in Washington. California is among the most aggressive states using local laws to increase transparency within the pharmaceutical industry. As its former legal leader, Becerra is likely to bring that same drive to Washington.

Last year he supported the Supreme Court’s decision to allow states to regulate pharmacy benefit managers—the middlemen between drug manufacturers and insurance companies that negotiate how drugs are covered by insurance. In 2017 he also joined a federal antitrust lawsuit charging six generic drug companies with a conspiracy to increase prices for two generic medications.

How to enforce the little-known 340B federal drug discount program will be among Becerra’s biggest policy decisions for drug executives. It requires drug manufacturers to give hospitals with primarily low-income patients a discount on medications in exchange for payments from state Medicaid programs. The network of facilities eligible for these discounts has ballooned since the program’s creation in the early 1990s because pharmacies associated with hospitals can also claim those discounts.

The program accounts for billions of dollars in savings for certain facilities, but because discounts don’t go to taxpayers directly the program isn’t widely known or discussed by the general public. That could change.

In the last year companies have trimmed the discounts they’re giving these pharmacies, which hospitals say cut back on the benefits they can give to their low-income patients. The HHS under former President Donald Trump put out statements urging companies to offer discounts, but it didn’t issue fines. A dispute system for facilities that get discounts is also in the works, but lawsuits over how the federal government is handling drug companies’ actions are still in motion.

Last year Becerra urged the HHS “to hold accountable drug manufacturers that are unlawfully refusing to provide discounts to federally qualified health centers, hospitals, and other providers that serve vulnerable patient populations through the 340B Drug Pricing Program.”

Becerra’s handling of the program will have big financial implications for drug companies, 340B facilities, and the patients they serve.

Becerra’s wealth of responsibilities will include addressing serious concerns about Medicare funding.

The Medicare Trust Fund, which includes the payroll tax-support fund that supports Medicare’s hospital services coverage, is expected to become insolvent—meaning the program wouldn’t have enough revenue to pay for all claims—by 2026.

“Our seniors who paid into Medicare should not be harmed by our need to come up with policy recommendations and solutions,” Becerra told lawmakers during his confirmation hearings.