Attorneys are bracing for more enforcement actions in the health-care space under the Biden administration with an aggressive litigator nominated to lead the Health and Human Services Department.

“Having someone in charge of HHS that was formerly an AG and enforcement person, I think we’re likely to see an uptick because of it,” said Habib Ilahi, a partner at Stinson LLP and former federal prosecutor with the fraud section of the DOJ’s Civil Division.

The pandemic has created new opportunities for fraud, making federal enforcement especially important to protect taxpayer funds and ensure that relief aid goes to those who need it most. Health-care providers that received stimulus funds will have to account for how that money was used to respond to the virus.

The public health crisis also pushed providers to find new ways to streamline services in an effort to stay profitable, leading to a spate of M&A deals that will need to be assessed.

There were 181 announced and closed deals in November alone, according to data from Bloomberg Law’s Health Care Transactions Editorial Committee. Kaufman Hall, a health-care consulting firm, reported 62 announced transactions involving hospitals and health systems in 2020 through the end of the third quarter. 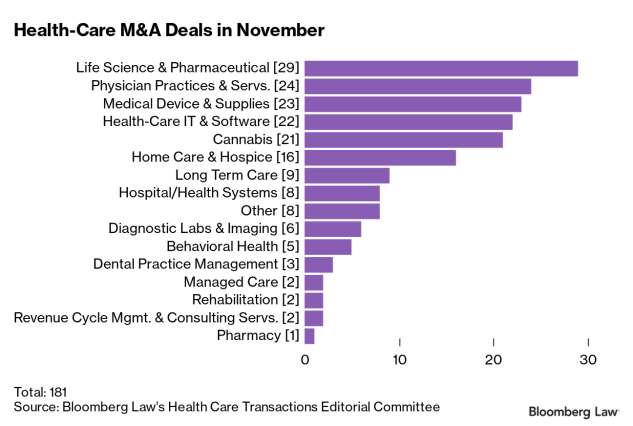 The HHS said it funneled more than $1.5 trillion in grants and other payments to public and private recipients in 2020 to help respond to the pandemic. The DOJ is aggressively prosecuting fraudsters caught misusing that relief aid, and attorneys say there’s more to come.

“It’s an easy forecast that the Covid-era will impact enforcement,” said Katie McDermott, a partner at Morgan Lewis and a former assistant U.S. attorney and DOJ health-care fraud coordinator.

“If you look historically at health care in particular, when there has been a ramp up in funding or a new program there has inherently been increased enforcement related to compliance with regulations or requirements for funding,” McDermott said.

The DOJ and the citizen watchdogs who sound the alarm will likely have a valuable ally in Becerra at the helm of HHS, if he’s confirmed by the Senate.

“He recognizes the value of whistleblowers in supporting the government’s fraud enforcement mission,” said Erika Kelton, partner and whistleblower attorney at Phillips & Cohen LLP. She noted that Becerra has supported efforts to expand the California False Claims Act to allow whistleblowers to report alleged tax fraud.

“DOJ’s client is HHS and if you have the client pushing to be more aggressive, DOJ will respond,” Ilahi said.

Michael Granston, deputy assistant attorney general for the DOJ’s Commercial Litigation Branch, said the department has recovered approximately $11.4 billion under the federal False Claims Act since 2017, $9 billion of which was recovered from health-care fraud matters.

“The False Claims Act is the government’s primary tool for addressing the knowing misuse of taxpayer funds,” he said during a recent virtual conference on FCA enforcement hosted by the American Bar Association.

Granston said the law will play a significant role in the department’s pursuit of Covid-related fraud. The FCA allows private citizens to file lawsuits on behalf of the government when they suspect a person or business is trying to defraud a federal program.

The DOJ hasn’t yet announced any FCA claims related to Covid-19, attorneys say. The FCA requires cases brought by whistleblowers to be filed under seal.

But in a recent anti-fraud case, a federal grand jury indicted a Pasadena man for allegedly using stolen identities to obtain thousands of dollars in employment benefits under the Coronavirus Aid, Relief, and Economic Security (CARES) Act. He then allegedly used the money to purchase a Maserati.

Whistleblowers bring 600 to 700 FCA cases a year and are awarded anywhere from 15% to 30% of the money that’s recovered. Of the $11.4 billion the agency has recovered since 2017, $1.54 billion went to whistleblowers, Granston said.

The HHS in December announced a False Claims Act Working Group to enhance its partnership with the DOJ and HHS Office of Inspector General, which shows the HHS is trying to better collaborate on enforcement efforts, McDermott said.

The DOJ will also be busy on a bottleneck of non-Covid related cases that have been delayed due to the pandemic. “Courts will expect those to move at the same time DOJ and OIG are expected to deal with the onslaught of Covid-related enforcement,” McDermott said.

Government scrutiny on M&A deals in the health-care space will continue as the pandemic pushes hospitals to look for ways to become more efficient.

“The cancellation of elective surgeries and postponement of even primary care visits, has really resulted in a huge reduction in demand, and that’s put additional focus on hospitals looking to merge in order to generate efficiency and synergy,” said Shawn Johnson, partner and co-chair of Crowell & Moring’s antitrust and competition group.

Hospitals in close geographic proximity that merge are the “types of transactions that are most likely to raise competitive concerns,” he said.

While the FTC is the agency responsible for enforcing antitrust laws, attorneys expect Becerra will monitor transactions and look over any arrangements that threaten to impact access to affordable health care.

“Practices that result in higher prices to patients and consumers will get scrutiny, and I don’t think it’s limited to hospitals,” she said. “We’ll see it across a range of industries that are under the health-care umbrella.”

The FTC has vigorously challenged health-care deals. The FTC and the state of Pennsylvania appealed a court order to the U.S. Court of Appeals for the Third Circuit that allowed Thomas Jefferson University and Albert Einstein Healthcare Network—two Philadelphia-area hospital systems—to merge. The hospital groups agreed Dec. 14 to hold off on closing the deal while the case plays out in court.

The FTC filed an administrative complaint Dec. 4 to block Hackensack Meridian Health Inc.’s proposed acquisition of Englewood Healthcare Foundation. The merged health system would control three of the six inpatient general acute care hospitals in Bergen County, N.J., and drive up the cost of that care, according to the FTC.

The agency didn’t provide a comment on what it expects future enforcement to look like. But its most recent actions provide further evidence that the FTC plans to continue to be aggressive in this space, Johnson said.

“Unless they change their philosophical approach and unless they break away from academic leaders who they depend upon to support their anti-consolidation position, I don’t see any reason why that’s going to change,” he said.