A tough year for nursing homes could well be the last for many facilities.

Experts say a wave of Covid-related closures, bankruptcies, and restructurings could sweep the industry next year, and neither large multistate operators, smaller regional outfits, nor independent, single-site providers would be immune from the fallout.

More than 120 nursing homes have already closed in 2020 and “another 150 or so are at risk for closing in the next few months,” said Mark Parkinson, president and CEO of the American Health Care Association, which represents more than 14,000 nursing homes and long-term care facilities.

Covid-19 has killed nearly 114,000 residents in nursing homes and other long-term care facilities, the Kaiser Family Foundation reports. The ripple effects have caused occupancy rates and revenue to shrink, while costs for protective gear, testing, cleaning, and staffing have skyrocketed.

Billions of dollars in state and federal aid have kept the industry afloat, but the dire economics are still taking a toll.

The Estes Park Health Living Center, a 52-bed facility in Colorado, could soon close after losing $1.4 million this year. The Farren Care Center in Turner Falls, Mass., will close by year’s end. And on Jan. 12, the Charles Morris Nursing Home and Rehabilitation Center in Squirrel Hill, Pa., closes its doors. 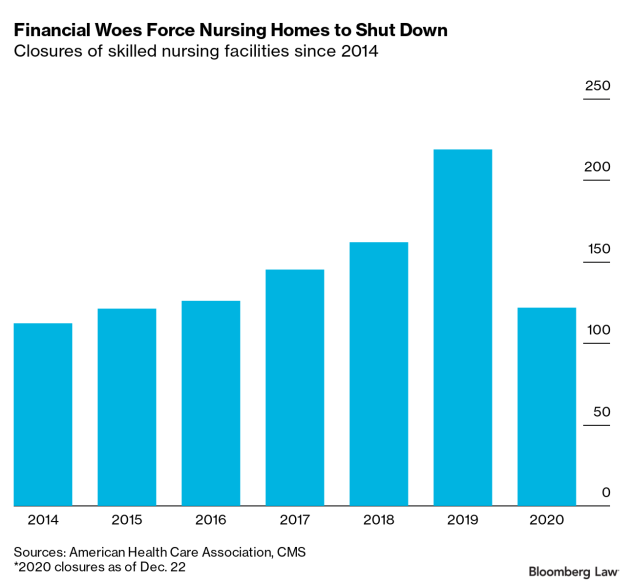 More than $21 billion in federal and state pandemic relief has helped the industry survive the financial and human devastation of Covid-19, Parkinson said.

That includes $1.1 billion from the Department of Health and Human Services on Dec. 16 and $854 million in incentive payments to thousands of facilities that slowed their Covid-19 infections and deaths.

In a catastrophic year, the money has actually helped slow the rate of nursing home closures, which had grown from 145 in 2017 to 219 last year.

“Since it will likely take months to vaccinate our population, these payments give our providers a fighting chance to battle this horrible virus and keep our doors open,” Parkinson said in a recent statement.

The stimulus-spending bill passed by Congress Dec. 22 provided no direct relief for long-term care facilities as they face a record surge of community-based infections that will strain their staff and resources this winter.

A $5 billion funding shot from the remaining CARES Act provider relief funds would help carry the industry through spring 2021, Parkinson said. But if that doesn’t materialize, “then we’re going to see hundreds of closures in the first half of 2021,” Parkinson said.

Most vulnerable are small rural facilities and larger urban facilities that both rely heavily on Medicaid patients, Parkinson said. Medicaid covers over 60% of nursing home residents, but program payments only cover 70% to 80% of the cost of care, the AHCA said.

More than 550 nursing homes closed between 2015 and 2019, according to a study by LeadingAge, which represents nonprofit aging services providers. Low Medicaid reimbursement rates, competition from newer residential care options, and a push to keep seniors in their homes fueled the trend.

An August AHCA survey found more than half of nursing homes were losing money, and 72% said they couldn’t go another year under current circumstances.

“No doubt about it,” he added. “Bankruptcy of nursing homes is at a very high risk right now for facilities around the country that are struggling.”