Medicare’s steady transition from its founding fee-for-service care model has hit a serious snag with the growing flap over coverage denials by the program’s private managed care plans.

By requiring plan approval, or “prior authorization,” before beneficiaries can receive certain health services, Medicare Advantage plans aim to reduce wasteful spending for unnecessary care, a problem that has dogged traditional Medicare for years.

In recent weeks, however, lawmakers, providers, patient advocates, and a government watchdog agency report have raised concerns that MA plans are using prior authorization to improperly deny medical care that fee-for-service Medicare typically covers. That includes provider requests for diagnostic imaging, pain injections, and the transfer of patients from hospitals to nursing homes and inpatient rehabilitation facilities.

“The concern is that financial considerations, rather than clinical characteristics, are being used to drive where the patient ends up,” said Kate Beller, executive vice president for policy development and government relations at the American Medical Rehabilitation Providers Association.

The growing backlash has renewed calls for the Centers for Medicare & Medicaid Services to require greater transparency and oversight of MA plans, which were paid $350 billion in 2021 and could become the dominant coverage option for Medicare’s 64 million-plus beneficiaries in 2023.

The American Hospital Association has asked the Justice Department to establish a “Medicare Advantage Fraud Task Force” to investigate improper payment and claims’ denials. And nearly 500 medical organizations are backing bipartisan legislation in the House (H.R. 3173) and Senate (S. 3018) to regulate prior authorization in Medicare Advantage.

But America’s Health Insurance Plans is resolute in its defense of the practice. In a letter to CMS Administrator Chiquita Brooks-LaSure, AHIP President and CEO Matthew Eyles said groups like the AHA and the American Medical Association were attacking Medicare Advantage “for their own financial benefit. Nowhere is that more evident than their unfounded attacks on evidence-based medical management tools like prior authorization.”

Eyles’s letter added that “certain provider organizations would prefer that all clinicians be given a blank check to order any test or procedure at any time, regardless of the expected value or expense to the patient. But giving clinicians carte blanche is no way to improve health care affordability and access for every American.” 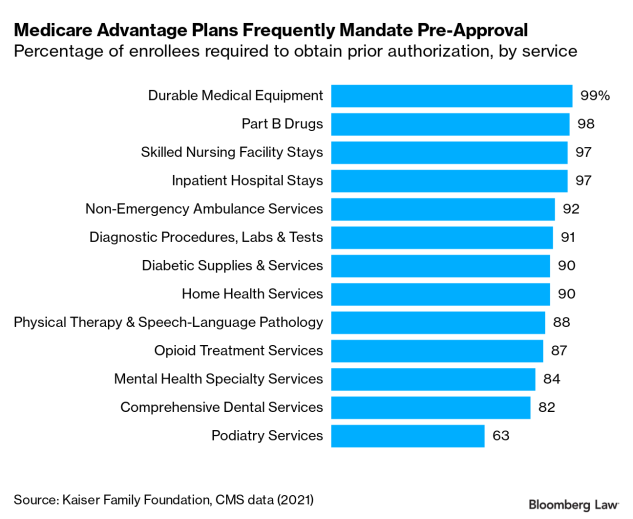 Surge in Prior Authorization

Unlike fee-for-service Medicare, which pays caregivers for each medical service they provide, MA plans receive a flat monthly payment for each beneficiary based on their health risk factors. The sicker the patient, the higher the payment. Because the payments must cover a patient’s total cost of care, MA plans employ utilization management techniques, like prior authorization, to provide care more efficiently.

Nearly 46%, or 29.4 million, of Medicare’s 64.2 million beneficiaries are enrolled in MA plans compared with 34.9 million in traditional fee-for-service, the CMS reports.

But as MA enrollment grows, so too has the use of prior authorization. In 2021, 99% of MA enrollees were in plans that used prior authorization for at least one service, up from 80% in 2018, said Meredith Freed, a senior policy analyst at the Kaiser Family Foundation.

“Having a handle on how prior authorizations are working in plans and being more transparent about care denial rates across plans is important for beneficiaries and for their decision making when they’re choosing plans,” Freed said.

A 2018 report by the HHS Office of Inspector General found that MA plans overturned 75% of their own prior authorization and payment denials when appealed by providers and beneficiaries between 2014 and 2016. But only 1% of denials ever made it to the first level of the appeals process over the same period.

An HHS OIG study last month found that 13% of prior authorization requests denied by MA plans actually met Medicare coverage rules. These denials stemmed mainly from the plans’ use of clinical criteria not contained in Medicare coverage rules, and from not having enough documentation to support approvals, the report said.

Following recommendations from the OIG, the CMS plans to issue clarifying guidance on the appropriate use of clinical criteria in such reviews, Brooks-LaSure wrote in response to the report. The CMS will also direct MA plans to “examine their manual review and system programming processes and address vulnerabilities that may result in inappropriate denials,” Brooks-LaSure said.

In January, a CMS proposed rule (RIN: 0938-AU30) included a request for information on how MA plans’ use of prior authorization affects hospital transfers to post-acute care facilities during a public health emergency.

In a comment letter, the American Medical Rehabilitation Providers Association said that during the Covid-19 Delta variant surge in August 2021, MA plans used prior authorization to deny 53% of more than 12,000 requests for admissions to inpatient rehabilitation hospitals. The average wait time for a decision was more than 2.5 days.

Beller, the association’s executive vice president of policy development and government relations, said the group wants the CMS to seek authority to suspend the use of prior authorization during future public health emergencies and impose a shorter response time for plans to decide on requests to transfer patients to inpatient rehab facilities.

The association also wants the agency to ensure prior authorization decisions are made by staff with training and experience that meet CMS standards.

The American Hospital Association urged Brooks-LaSure to include MA plans in a proposed rule (RIN: 0938-AT99) drafted by the outgoing Trump administration in December 2020 that would have regulated the use of prior authorization by Medicaid managed care organizations.

The proposal was never implemented and a related final rule is on hold pending review, the CMS said.