Health equity issues highlighted by the Covid-19 pandemic are, in part, driving a trend among bigger companies to seek ways to help their lower income workers benefit from the health-care plans they provide.
Joe Raedle/Getty Images

The trend is driven, in part, by a new understanding of health equity issues as a result of the Covid-19 pandemic. More companies are reconsidering ways to help their lower-income workers benefit from the health care coverage they provide, consultants say.

Under a wage-based premium model, workers at the bottom end of a company’s pay scale pay less for health insurance coverage than those at the top—and could also get more help with out-of-pocket expenses. The goal is more equitable costs overall. 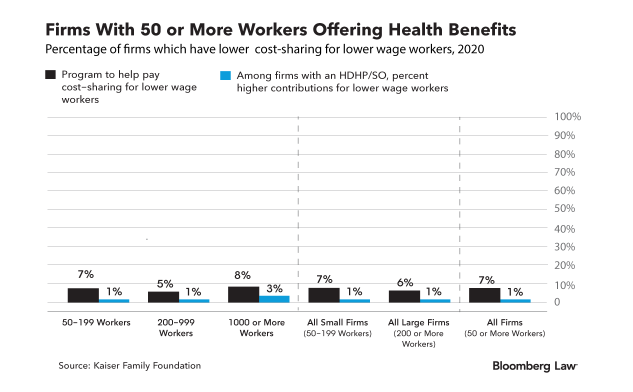 A Willis Towers Watson survey of 378 U.S. companies employing 5.9 million workers released Oct. 6 reported that 22% of employers already structure their employee health-care contributions based on pay levels, and another 8% are planning to do so or are considering it over the next two years.

The employer-run health care system dominant in the U.S. for decades worked by charging most employees based on the number of their family members covered by a plan. The employer covers a certain percentage of the plan’s cost, with employees making up the difference and little variation in how the plans work for each employee.

But that model is changing.

“There’s really been a clarion call because of the gross health inequities that were laid bare by the Covid pandemic,” Elizabeth Coté, president and chief of equity and inclusion at MyHealthMath in Portland, Maine, said in an interview. MyHealthMath advises employers about health plans.

The pandemic’s disproportionately high impact on lower-income people and people of color “made it obvious that people in certain groups experienced more suffering and mortality than other groups when faced with the same health threat,” Coté said. In addition, after the civil unrest around police shootings, “There’s been a huge and growing commitment to diversity, equity, and inclusion among companies,” she said.

Public health-care programs are based on income but, in the private employer market, which covers most working-age people, most plans were designed around the time of World War II to supplement pay, Coté said.

“Those health benefits were being offered to a largely homogenous population,” she said, and employers’ fixed-contribution plans are “the legacy that we’ve inherited.”

“It seems really equal that everybody gets $10,000 towards an average $20,000 health plan,” Coté said. But that results in lower-income workers paying a higher portion of their income to participate in the company health plan.

Companies that base employee health-care contributions on wages are typically larger companies, Bruce Sherman, who serves as medical adviser to the Cone Health/Trial Health Network in Greensboro, N.C., and to the National Alliance of Healthcare Purchaser Coalitions, said.

A recent survey from the Kaiser Family Foundation found that, among employers with 50 or more employees offering health benefits, 7% reduce cost sharing for lower-wage workers. Of those larger firms that contribute to workers’ health savings accounts or health reimbursement accounts, 1% contribute more money into accounts for their lower-wage workers.

Lower-income workers, too, have to pay more of their income to meet deductibles and other out-of-pocket expenses. Even with wage-based premiums, “For employers that have high-deductible plans, the deductible doesn’t change,” said Sherman, whose research showed that low-wage workers used preventive services about half as often as their high-wage counterparts.

Companies that have adopted a wage-based approach to employee health-care contributions say it has paid off by keeping lower-wage workers in their plans and encouraging them to seek out health care.

Synchrony recently increased its minimum wage to $20 an hour for its workers, including hourly service representatives. For the lowest-premium plan, a single employee could pay $2 a week, and the contribution for a family of five could be $10 a week, Brown said. The highest employee premium contribution for senior executives could be 10 to 20 times as much for the same plan, he said.

The company pays about $260 per week per enrollee for medical, prescription, and vision coverage.

Out-of-pocket maximums, including annual deductibles and coinsurance, are about 40% lower for entry-level tier employees compared to higher-tier employees. Synchrony hasn’t increased out-of-pocket costs for many years, Brown said. As a result, lower-paid workers are seeing doctors and using their health benefits, he said.

The wage-based contribution system is “consistent with our values,” Brown said. “We certainly want to make sure that folks can afford medical coverage at the company, and this was the best way to do that.”

And are higher-paid employees subsidizing those earning less? “The tough way to think about that,” Brown said, is, `"What portion of the overall cost is the company paying, and how does that compare with other companies?’”

It comes down to “the relative mix of how much the employee pays” versus what the employer pays, Brown said. No employees are paying “anywhere close” to the full cost of the plan, he said. “They’re paying for a portion of their own medical coverage.”

Media company News Corp., based in New York, bases its employee premiums on a percentage of pay, Marco Diaz, senior vice president of global benefits, said in an email.

News Corp., which owns Dow Jones, has about 6,400 employees and covers about 13,000 people under its U.S. medical plan. The wage-based premium program was started by one of the company’s subsidiaries in 2010.

“By stratifying our cost in this way we are not pushing lower paid employees into lower cost, lesser coverage-type plan designs as might be the case in a flat rate-based model,” Diaz said. Employees can choose the plan that best fits their needs, he said.

“Having comprehensive health insurance does encourage employees to seek out and continue with appropriate health care and prescription benefits, which in turn results in better health outcomes for them and their families,” Diaz said.

Some 170-200 of the agency’s employees are covered by Community Teamwork’s health plans, which are fully insured through Harvard Pilgrim Health Care, Wholey said. It is working with MyHealthMath to identify ways to make plans more affordable for lower-paid employees, such as Head Start teachers’ assistants and maintenance people, she said.

Community Teamwork pays 80% of the premiums for the most affordable health plan it offers, but more of its higher-paid employees participate in its plans than do lower-paid employees, Wholey said. They want to determine why, she said.

Fully insured plans like Community Teamwork’s don’t normally vary premiums by employees. But contributing more to health reimbursement accounts or health savings accounts for lower-paid employees would help them pay for out-of-pocket expenses such as annual deductibles, Wholey said. Premiums could also be lowered across the board for employees who choose high deductible plans.

“Our mission about helping people out of poverty really ties with what this is all about, trying to create equity within the plans,” Wholey said.

To contact the editor responsible for this story: at bbierman@bloomberglaw.com, at csaenz@bloombergindustry.com