America’s beleaguered health system has remained afloat throughout the coronavirus attack, if only through raw ingenuity.

As Covid-19 started spreading across the U.S., health officials made grim projections of hundreds of thousands of deaths if residents didn’t shelter in place. Hospital executives predicted frightening forecasts: mass shortages of intensive-care beds, dwindling personal protective equipment and a dearth of ventilators.

The worst didn’t come to pass. Today, almost every state is avoiding ICU bed shortages, according to the consulting firm Advisory Board. On April 1, projections had painted a bleak picture of unquenchable demand. On April 13, the outlook was “much more optimistic,” a company presentation said, adding: “challenges ahead, but progress across the board.”

Hospitals, governments and companies from Seattle to New York MacGyvered their way out of the chaos. Cafeterias were transformed into medical wards, breathing tubes were recycled, ventilators were split between patients, and specialists like orthopedic surgeons and oncologists were sent straight to the emergency room. Whiskey companies made hand sanitizer. Furniture-makers started producing surgical masks. States banded together.

“The amount of innovation that has come to the front, and the speed at which it’s come to practice, is quite amazing,” said Jay Swaminathan, a professor at the University of North Carolina’s Kenan-Flagler Business School. 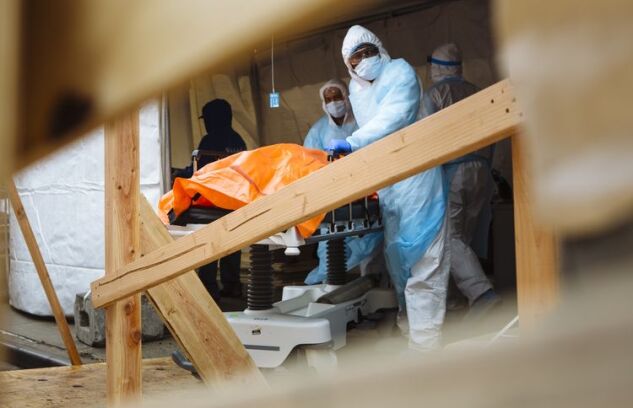 Medical workers wearing PPE move the body of a deceased patient to a refrigerated overflow morgue outside a hospital in Brooklyn, New York, on April 3.
Photographer: Angus Mordant/Bloomberg

Health-care workers across the U.S. have been facing severe personal protective equipment, or PPE, shortages for weeks. More than 9,000 health workers have been infected as of April 9, according to the Centers for Disease Control and Prevention, and at least 27 have died. In some hospitals the situation has become so dire the equipment has been locked in cages and rationed. Reports have surfaced of doctors wearing ski goggles to treat patients, surgical gowns being replaced with ponchos and nurses being told to write their names on face masks and re-use them for days on end.

As the medical system has scrambled to manage dwindling supplies, competition for crucial equipment has fueled confusion and suspicion between states and the federal government. The Federal Emergency Management Agency recently issued a temporary rule requiring all exports of certain masks, gloves and other materials used in the U.S.’s coronavirus response to get “explicit approval” from FEMA. Rather than wait for that, some desperate health-care workers have taken the matter into their own hands, with a little help from local businesses.

In Mukilteo, Washington, Kaas Tailored makes home furniture, as well as airplane seats and sofas used in retail showrooms. On March 18, co-owner and president Jeff Kaas offered up its manufacturing capacity to Providence St. Joseph Health. “I said, ‘If you’re serious about 100 million masks, you have to get the industrial people moving, and the little guys will move fast,’ ” Kaas said.

The work between Kaas and Providence also involved resources from larger companies — Nordstrom’s tailors, Alaska Airlines’ planes. It became part of a blueprint shared by the American Hospital Association connecting hospitals in other cities with manufacturers and businesses in their areas, said Providence CEO Rod Hochman. “What started as a great idea in a room in Seattle turned into a national campaign,” Hochman said.

Other changes were simpler. In central Illinois, OSF HealthCare St. Joseph Medical Center switched to laundered gowns to avoid running through as many as 800 disposable ones each week. “We’ve all learned agility during this pandemic, and to offer each other a lot of grace,” said chief nursing officer Toni Bishop-McWain. 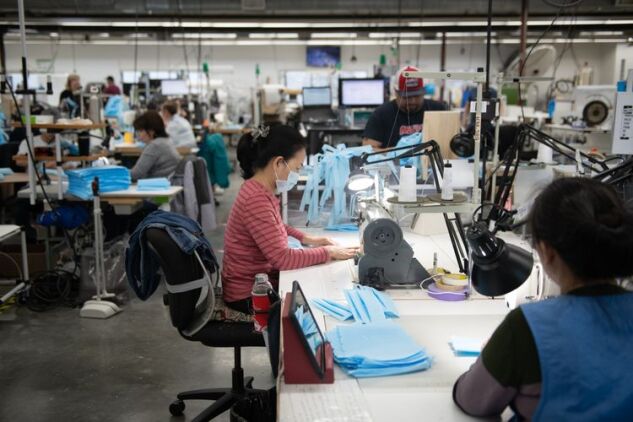 This is nowhere more true than New York City, site of the country’s most intense outbreak.

At the Covid apex in early April, the city was short by an estimated 5,000 ICU beds and as many as 30,000 life-support machines. The peak came and went, leaving more than 11,500 dead in its wake, but the city’s hospitals stood their ground.

No patients were airlifted out for space. The USNS Comfort hospital ship, which has been docked at Pier 90 in Manhattan for two weeks, still has hundreds of empty beds. The premier Mount Sinai Health System used only 80% of its critical-care ventilator capacity. And on Thursday, New York Governor Andrew Cuomo said he would send 100 ventilators to help neighboring New Jersey.

“There were very high projections and massive concerns about whether or not the health-care system would be able to handle it,” said Carri Chan, a Columbia University business professor who specializes in hospital management. “Because administrators acted very rapidly and very aggressively, they are in a much better situation than the projections had anticipated.

“They recognized we don’t have the luxury to sit around and think, ‘What’s the best way to do this if we need to come up with a solution for tomorrow?’”

At Brooklyn’s Kings County Hospital, a student army was conscripted overnight. In mid-March, Anjali Jaiman, a fourth-year medical student, was sent home early from her training shift on the obstetrics and gynecology ward and told the entire program was suspended because Covid-19 was about to upend the hospital. Frustrated, Jaiman, 31, asked her fellow students on Facebook whether anyone would volunteer. More than 250 signed up.

The students keep the hospital’s core machinery operating. Fifty run daily blood tests on Covid-19 patients and 20 analyze data for the hospital’s president. Dozens call funeral homes to find out whether they can take more bodies.

From 8 a.m. to 4 p.m. each day, Jaiman answers calls from desperate families who can’t visit loved ones due to the hospital’s no-visitor policy. The team takes over 140 calls a day.

“We get multiple family members calling in and some will call in multiple times a day,” Jaiman said. “We want to make sure this person doesn’t get lost in the chaos of the emergency room.”

At New York’s Mount Sinai Health System, admissions have been leveling off, said Robert Freeman, vice president of clinical innovation. About 600 are on ventilators, but the number has plateaued, he said. Tesla Inc. donated 200 so-called BiPAP breathing devices, often used for sleep apnea, that were in the hospital library into critical-care ventilators to increase their oxygen pressure. So far, only a small percentage have needed to be used in intensive care.

The hospital started treating patients from outside their negative-pressure rooms to minimize times workers had to enter: Nurses monitor ventilators remotely, and doctors call patients on tablets to conserve personal protective equipment. 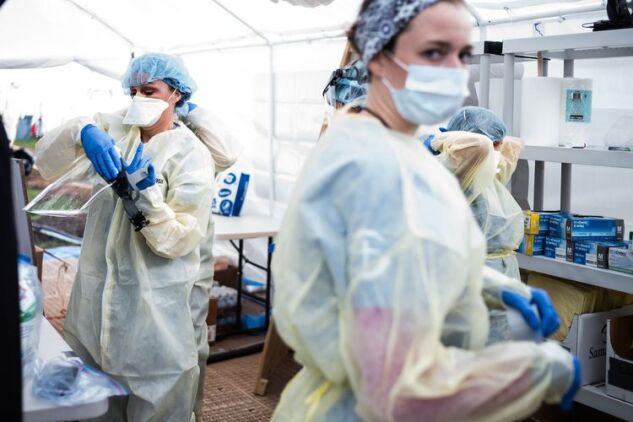 Medical workers put on PPEs at the beginning of their shift at the emergency field hospital run by Samaritan’s Purse and Mount Sinai Health System in Central Park in New York, on April 08.
Photographer: Misha Friedman/Getty Images

“They can Zoom into the patient,” Freeman said. “This has definitely saved us PPE, and it minimizes exposure.”

Data scientists at Mount Sinai have been building artificial intelligence tools to speed discharges. A program scans a patient’s medical records, combing through blood work, vital signs and temperature readings to determine who can be sent home in the next 72 hours.

“We are so constrained right now with hospital beds that the last thing we want is for the patient to be ready when we are not ready,” Freeman said.

“The social distancing and stay-at-home measures, they allowed the hospital systems to quickly mobilize,” Murthy said. “We were able to designate areas of the hospital where patients would be housed, identify teams of health-care workers and get supplies.

“These are examples of things that were helpful, clearly, but at the cost of our colleagues in New York having to go through such a horrific experience.”

Kaas, the Washington furniture-maker, found a temporary financial lifeline in the emergency mask work. “Demand will peter out and then we’re dead,” Kaas said. “No one needs an airplane part right now, Nordstrom won’t be opening a new store any time soon. I told my people, ‘Well, we got to survive another four weeks.’”

Thanks to hundreds of such efforts across the country, many other Americans will survive much longer.

To contact the authors of this story:
in New York at ocarville1@bloomberg.net

To contact the editor responsible for this story:
at fmcroberts1@bloomberg.net