There’s a clear view of what a world without Roe v. Wade would look like in terms of the law because conservatives have been working for decades to limit abortion access.

Thirteen states have what are known as “trigger laws,” which kick in and ban abortion if the U.S. Supreme Court overturns Roe, which a leaked opinion from the court signals it will do. Nine states—Alabama, Arizona, Arkansas, Michigan, Mississippi, Oklahoma, Texas, West Virginia, and Wisconsin—have abortion bans on the books, albeit unenforceable now, that were enacted before Roe was decided in 1973, according to the Guttmacher Institute, a research group that supports abortion rights.

What’s not clear is whether states can enforce their laws beyond their own borders—in particular, by trying to stop their residents from traveling across state lines to terminate a pregnancy. Trying to impose their abortion policies upon other states is what one legal expert calls “the next frontier in anti-abortion legislation.”

“It’s going to be an invitation to states to innovate in restricting and banning abortion,” said David S. Cohen, a professor at Drexel University’s Thomas R. Kline School of Law in Philadelphia, who’s authored an upcoming article on cross-state legal issues that could arise in the context of abortion rights. “There are going to be a number of states who are not satisfied with just knowing that there’s no abortion happening in their own state. They’re going to want to do more than that.”

After Texas banned almost all abortions after about six weeks, Planned Parenthood said its clinics in neighboring states saw an almost 800% increase in abortion patients.

But abortion travel isn’t financially and logistically an option that’s available to everyone. That’s why several big employers like Citigroup, Yelp, and Uber have pledged pay the travel expenses if their employees can’t access the procedure in their home states.

Some legal scholars think any attempt to stop people from leaving the state for an abortion would be unlawful since the Constitution protects individual liberty and gives people the right to travel. There’s also a legal doctrine called the Dormant Commerce Clause that prevents states from discriminating against or unduly burdening interstate commerce.

The question is will courts agree?

“Unfortunately, there’s no real clear precedent on this issue,” Cohen said. “A particularly anti-abortion court like we have at the U.S. Supreme Court, I think, might find enough wiggle room in the past cases to say it’s not unconstitutional because states are allowed to have extraterritorial effect of their laws.”

The majority of the states’ pre-Roe bans make it a felony punishable by fines and/or jail time to perform or attempt to perform an abortion. Those laws don’t target the pregnant person. Only a handful of states ban self-managed abortions, but states have used other laws to criminalize pregnancy outcomes, said Guttmacher’s state policy analyst Elizabeth Nash.

A Texas woman was just arrested in April on murder charges after she allegedly caused “the death of an individual ... by self-induced abortion.” A Texas district attorney ultimately dismissed the charges, but legal scholars say there are aggressive local prosecutors who may try to use trigger laws and other pre-Roe bans to go after a pregnant person or anyone who helps them travel for an abortion.

Prosecutors could argue that as long as some part of the crime took place in the state, then they are allowed to have jurisdiction and developing the guilty intent to travel may be enough, Cohen said.

If a young woman and her best friend decide in Missouri they’re traveling to Illinois to get an abortion, the criminal intent has taken place in Missouri, he said. 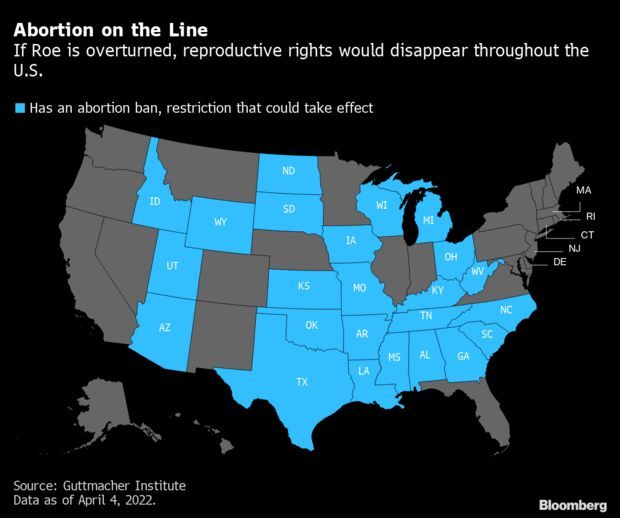 Using the same model Texas used in an abortion law known as S.B. 8, Missouri state Rep. Mary Elizabeth Coleman (R) introduced a proposal in December to allow private citizens to sue anyone who performs an abortion or helps a pregnant person obtain one, even if the procedure takes place outside Missouri.

S.B. 8 bans abortions after six weeks of pregnancy, which abortion advocates have argued violates the Supreme Court’s rulings on abortion, but no court has been able to stop it because it’s enforced by private parties through civil litigation, not government officials.

Coleman’s proposal didn’t get a vote in the House this year, but that doesn’t mean lawmakers in Missouri and in other Republican-led states won’t consider it in the future. An attorney involved in abortion litigation, who requested anonymity for personal safety reasons, said the only way to control abortion travel may be to enact a law like the one Coleman proposed.

“That’s the only plausible strategy I can see for anti-abortion lawmakers if they want to stop abortion tourism,” the attorney said.

“If they just say it’s illegal to leave the state to get an abortion, someone can sue and challenge the constitutionality of the statute. If they do it the way Mary Elizabeth Coleman drafted it, by this sort of private civil enforcement, it can’t be challenged in court pre-enforcement.”

Some Democratic-led states are trying to enact measures to stop GOP bans on abortion from chilling access to the procedure in their state.

In California, S.B. 1142, which would provide funding for out-of-state residents who may travel there for an abortion, is scheduled for a May 9 hearing in the Senate Appropriations Committee. California lawmakers are also considering a measure to shield those who help a pregnant person travel to the Golden State for an abortion from getting sued.

Connecticut lawmakers passed a bill (H.B. 5414) to shield providers and anyone who travels to the state for an abortion from lawsuits or out-of-state investigations and prosecutions. The law would allow anyone sued by a state that bans abortion to countersue in Connecticut for damages and attorneys’ fees.

Sam Lee, director of Campaign Life Missouri, said Coleman’s proposal was just a bridge too far for Missouri lawmakers right now because there are so many unknowns about how and whether such a measure would work.

Missouri has tried to extend its laws to out-of-state conduct before. In 2005, the state passed a law that created a civil cause of action against anyone who helps a minor get an abortion without parental consent or a judge’s permission, even if the abortion takes place in another state that doesn’t require it. The state Supreme Court in 2007, however, narrowed the law so it only applies to abortions in Missouri.

Lee said Missouri lawmakers he talked to also expressed fear that allowing people to bring private civil lawsuits in this context against providers and anyone who aids in an abortion whether in or out of state could create a principle that would be used in other areas like gun control.

“I think it’s something we will look at, but I think it needs some work,” he said.

—Joyce Cutler in San Francisco contributed to this report.

To contact the reporter on this story: in Washington at lwheeler@bloomberglaw.com and Patricia Hurtado in New York at pathurtado@bloomberg.net