Generic abortion pill maker GenBioPro is searching for a new court to revive its battle against state restrictions, though the company’s hunt for a favorable judicial forum will prove complicated thanks to appointments from the Trump administration.

Former President Donald Trump’s shakeup of the judiciary has created unpredictable arenas as GenBioPro plans out its next legal challenge to ensure access to the pill mifepristone. The drugmaker voluntarily dropped its lawsuit in Mississippi challenging statewide abortion restrictions but has since signaled its intent to bring suit elsewhere.

“We’re not done with the battle by any means,” said Kenneth Parsigian, a Latham & Watkins attorney who represented GenBioPro in the Mississippi litigation.

“There are other places, and we will be bringing other suits,” he said.

Parsigian wouldn’t disclose when or where GenBioPro plans to file its next case. But where the challenge lands could depend on the composition of judges at the appellate level.

In the past a court in the Ninth Circuit might have been an easy choice, but Trump named 10 judges to that appeals court—leaving it just as likely to side with conservative arguments.

“This idea that the Ninth Circuit is a liberal bastion is being eroded pretty quickly,” said Katie Keith, a Georgetown Law professor. Post-Trump, it’s “almost evenly split between Republican and Democrat appointments.” 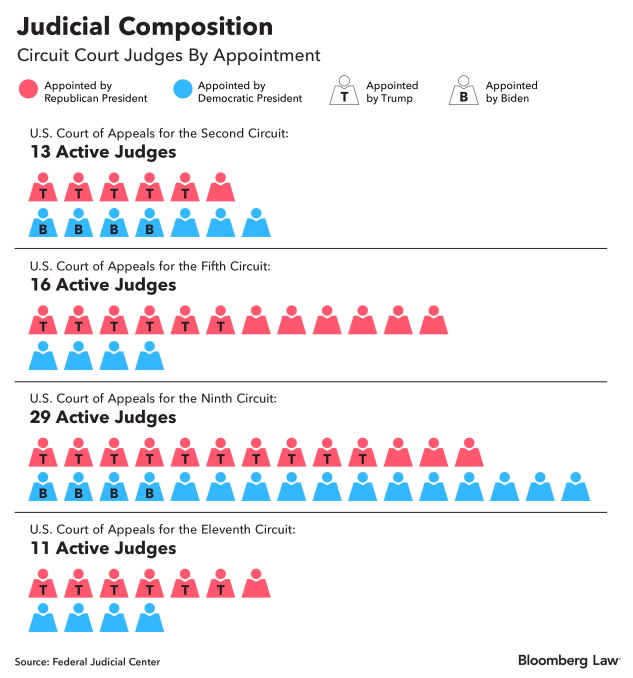 Filed in 2020, GenBioPro’s initial lawsuit teed up the question of whether Food and Drug Administration rules on abortion pills override state restrictions on their use. It’s a central question after the Supreme Court stripped federal abortion rights, and both sides are looking to the courts to resolve it.

The FDA has approved mifepristone to terminate pregnancies for up to 10 weeks. Fifteen states have bans on abortions at six weeks or earlier, according to the Guttmacher Institute, complicating the use of mifepristone. Indiana and Texas have specific bans on any use of the abortion pill.

GenBioPro’s lawsuit challenged abortion restrictions in the same state that succeeded in persuading the nation’s highest court to overturn Roe v. Wade. In a post-Roe world, people across the US are increasingly looking to medication abortion as one state after another erects limits around ending pregnancies.

But in late August, following changes to its lawsuit in light of the new Supreme Court precedent, GenBioPro dropped its challenge. Legal experts count the US Court of Appeals for the Fifth Circuit—where GenBioPro’s Mississippi suit would have landed on appeal—as among the worst arenas for the drugmaker’s case. Of 16 active judges, 12 were appointed by Republican presidents. Six of those judges were appointed by Trump.

GenBioPro is likely looking for a new court that “at the very least, is going to take the challenge seriously and is going to hear full arguments on both sides, and maybe won’t rely so much on, ‘there’s no right to abortion. End of story,’” said Michael Ulrich, assistant professor of health law, ethics and human rights at Boston University.

Attorneys say the Eleventh Circuit is also one GenBioPro or a similarly situated plaintiff would want to avoid, due to its conservative composition. Six of the appeals court’s 11 active judges were appointed by the Trump administration, while the Biden administration has yet to appoint a single judge to the court. Under that circuit’s jurisdiction are Alabama, where abortions are outlawed at conception, and Georgia, which blocks abortions after six weeks. 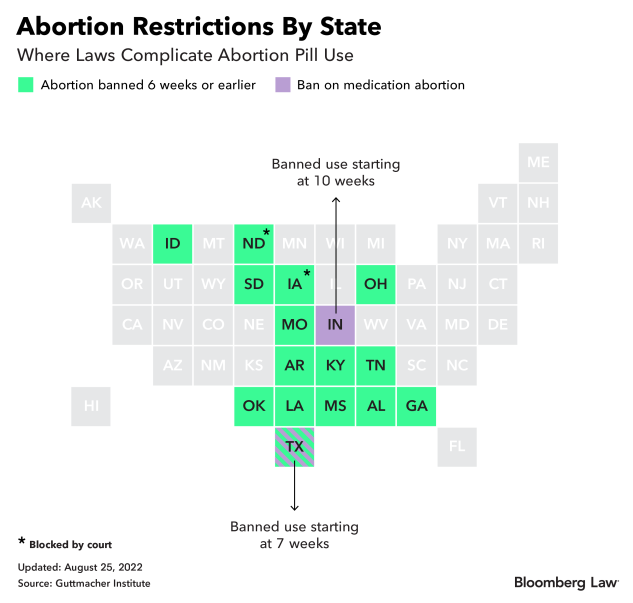 Where a case lands also depends on which states have restrictions that might affect access to mifepristone.

“The truth is, many states that have this kind of restriction are not likely to be in a welcoming circuit,” Keith said.

“Right now you need states or areas that have restrictions in these circuits,” Ulrich said. “That could ultimately limit options to where they could bring this kind of suit.”

The battle between state and federal rules around abortion pills falls into thorny legal areas.

“The FDA has specifically crafted a safety program” for the use of abortion pills, said Ameet Sarpatwari, assistant professor of medicine at Harvard Medical School. “And for states to say additional safety measures are needed really starts to get into an ‘obstacle preemption’"—when a state law stands in the way of accomplishing a federal goal. For example, Mississippi’s restrictions go beyond what the FDA requires and mandate that a licensed physician prescribe mifepristone in person.

“This issue is absolutely critical—there has to be a resolution in whether or not FDA preemption will prevail,” O’Leary said.

The US Supreme Court has previously weighed in on conflicts between federal and state views on drugs. In 2012’s Mutual Pharmaceutical Co. Inc. v. Bartlett, the justices ruled that a generic drugmaker couldn’t strengthen warnings on a label without federal approval despite a state law duty to do so.

In the abortion pill saga, “from a precedential aspect, I think there is a viable preemption challenge that can be made,” Sarpatwari said.

But when it comes to abortion, “given that this is such a politically charged issue, and that this has been a litmus test for conservative justices for the past 30 years, I am sure that the majority of the court would find a way, whether or not through strained judicial logic, to sidestep that precedent and say that it is not applicable in this instance.”

Though the changing legal landscape has complicated GenBioPro’s case, Alexander Reinert, director of Cardozo Law’s Center for Rights and Justice, said there haven’t been enough decisions post-Roe “to know exactly how a preemption argument like this would play out.”

Reinert said he expects a legal challenge to “ultimately make it to the Supreme Court” if GenBioPro succeeds in arguing that FDA requirements preempt state restrictions. “People are going to do what they can to protect access to the right to abortion, whatever legal means there are to do so.”

The pathway to the nation’s high court is likely to be difficult. Still, attorneys say that advocates won’t be dissuaded from bringing lawsuits, given the importance of pills in the abortion debate. And for GenBioPro, venue and timing will be important factors as it plans out its next move.

“When you’re doing a nationwide battle, you have to be strategic,” Parsigian said. “That’s what we’re doing.”