A supporter of the Vote Yes to a Constitutional Amendment on Abortion holds up a sign along in Olathe, Kansas.
Photo by Kyle Rivas/Getty Images

Anti-abortion activists pointed to convoluted wording in the Kansas ballot initiative that may have stopped people on the fence from voting for it—such as mentioning exceptions for rape, incest, potentially leading voters to believe they might be voting against such exceptions.

Instead, the other state anti-abortion campaigns intend to direct their messaging efforts toward clearing up what they say are misconceptions with their proposals and problems with abortion rights initiatives.

National Right to Life President Carol Tobias said what she heard in Kansas from abortion rights advocates were “lies about ectopic pregnancies and miscarriages, and false claims that women who have abortions would be prosecuted.”

“Contrary to those lies, pro-life legislation allows the removal of ectopic pregnancies and other procedures to save the life of the mother, the treatment of miscarriages, and does not impose any penalties on women who have abortions,” she said in a press statement.

Abortion rights activists stand by their call for people to turn out. “When voters know their rights are being threatened, they show up and vote to protect them,” said Sarah Standiford, Planned Parenthood Action Fund’s national campaign director. “Our job is to ensure that voters know what’s at stake for abortion rights this cycle.”

Tuesday’s primary election in Kansas included the first referendum on abortion since the US Supreme Court ruled that there’s no federal right to end a pregnancy, leaving the states broad power to regulate abortion.

Ballot measures in Vermont and California would insert “reproductive liberty” and “reproductive freedom” rights into those states’ constitutions, adopting an affirmative right to abortion and contraception. Michigan election officials have until Sept. 9 to certify signatures for a similar ballot measure.

The wording of a ballot measure in Kentucky is similar to the failed proposal in Kansas. It would bar courts from ruling that there is a right to an abortion within the state constitution. 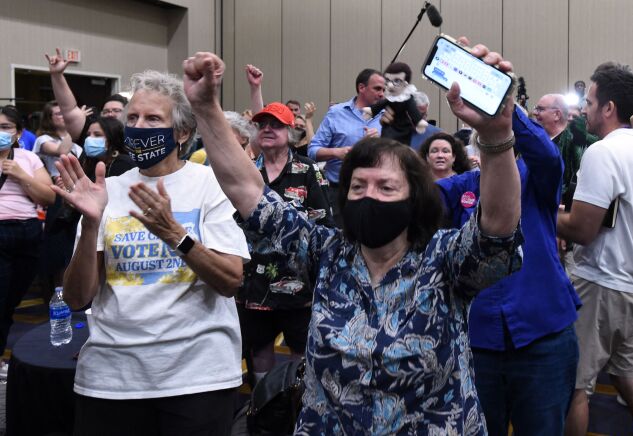 The Kansas ballot measure said the state Legislature would be able to regulate abortion, “including, but not limited to, in circumstances of pregnancy resulting from rape or incest, or when necessary to save the life of the mother,” potentially leaving voters wondering if a “yes” vote would open to the state to a ban even in extreme circumstances.

Confusion about the wording of the ballot measure appears to have hurt the anti-abortion side in Kansas, and it probably will hurt the abortion rights side in Michigan, said Christen Pollo, executive director of Protect Life Michigan. Voters tend to vote against something they don’t understand, and that’s why “there’s always an advantage to a ‘no’ vote,” she said

Kentucky Right to Life Executive Director Addia Wuchner also said voter confusion may have been at play in Kansas, and noted that by contrast, the wording in her state is “very clear and concise.”

The proposed Kentucky amendment would add this language to the state Constitution: “To protect human life, nothing in this Constitution shall be construed to secure or protect a right to abortion or require the funding of abortion.”

The results in Kansas, a state with a “very diverse population of independents and conservatives and Democrats and progressives,” will energize advocates elsewhere, said Corrine Rivera Fowler, policy and legal advocacy director for the Ballot Initiative Strategy Center, which supports abortion rights amendments.

The Kansas vote also sends the message that voters must show up to vote in races where candidates want more abortion restrictions, she said.

After joining NARAL Pro-Choice America and EMILY’s List in collectively pledging to spend $150 million on the 2022 midterms, Planned Parenthood’s political and advocacy organizations will be active in 10 states before the November election.

“Kansans have proven what we have long said: abortion access is a winning political issue and anti-abortion politicians are placing themselves on the wrong side of voters,” said Jenny Lawson, executive director of Planned Parenthood Votes.