Signage outside a Honeywell lab in Broomfield, Colo., on Oct. 14, 2020.
Photographer: David Williams/Bloomberg

will tell the D.C. Circuit on Wednesday that the time has come to end the Justice Department’s 13-year body armor fraud suit against it, because settlements with other companies have made the government whole.

The case could have major consequences for how multiple defendants must split big-dollar judgments in fraud cases and ultimately encourage big companies to drag their feet in settlement negotiations.

Honeywell says that under a dollar-for-dollar offset approach known as pro tanto, Honeywell owes the government $0, not $35 million, because the government has already recovered $36 million in other False Claims Act settlements. The $35 million figure comes from trebling the roughly $11.5 million in actual damages alleged.

A district court agreed with Honeywell in June 2021 that the U.S. Court of Appeals for the D.C. Circuit should address whether pro tanto is proper, or if a “proportionate share” damages approach is equitable. Proportionate share forces a bad actor to pay a fair amount of total damages relative to others if found liable.

Although it said the issue needs resolution, the district court ruled against Honeywell in November 2020 with its application of the “proportionate share” approach.

It “would be wholly inequitable to permit Honeywell to escape damages liability altogether,” the district court said.

The district court should be affirmed because a Honeywell win on appeal “could discourage early settlement in cases with multiple wrongdoers,” said Shelley Slade, a whistleblower attorney at Vogel, Slade & Goldstein LLP in Washington.

Defendants might want to be the last to settle in order benefit as much as possible from the pro tanto approach, she said.

A Honeywell win would tell bigger industry players that they can “delay the litigation as long as possible hoping that the smaller players, without the same resources to litigate and take on the risk, would be more likely to settle out, thereby reducing the big player’s exposure for damages, possibly to zero if there were many others involved in the fraud,” she said.

The FCA allows for civil penalties, but the penalties here, as the government argued, would only amount to $550,000—far less than the harm the government actually suffered from the alleged defective armored vests, said Edward Baker, a whistleblowers attorney at Constantine Cannon LLP in Washington.

“Honeywell is the last defendant standing and shouldn’t be rewarded for dragging out the litigation process,” he said. “And other FCA defendants in multi-party cases shouldn’t be incentivized to do the same.”

A Honeywell win could encourage delay in some cases, but “defendants still face the threat of civil penalties under the FCA after other defendants settle out, which often dwarf damages liability in cases involving a substantial number of claims,” said D. Jacques Smith and Mike Dearington, an FCA defendant-side attorney with ArentFox Schiff LLP in Washington.

Courts don’t often take on the pro tanto issue because DOJ often settles multi-defendant cases for less than the full treble damages, or it reaches agreements on offsets among defendants without resorting to litigation, said Matthew D. Krueger, an FCA defendant-side at Foley & Lardner LLP in Milwaukee and Washington.

This means liability exposure is uncertain, which is especially important for health-care and life sciences companies that face robust FCA enforcement, he said.

“For example, in a case premised on illegal kickbacks, both the payor and the recipient can be liable under the FCA for the same tainted claims,” he said.

DOJ sued Honeywell in 2008, long before the case wound up at the D.C. Circuit. The agency asserted that the company hid information about bulletproof vest material Z Shield and how it degraded in high heat and humidity inside the vests provided to law enforcement agencies between 2000 and 2005.

While litigating with Honeywell, the government recovered about $36 million in Z Shield-related settlements with parties in the supply chain, including Armor Holdings and Toyobo. 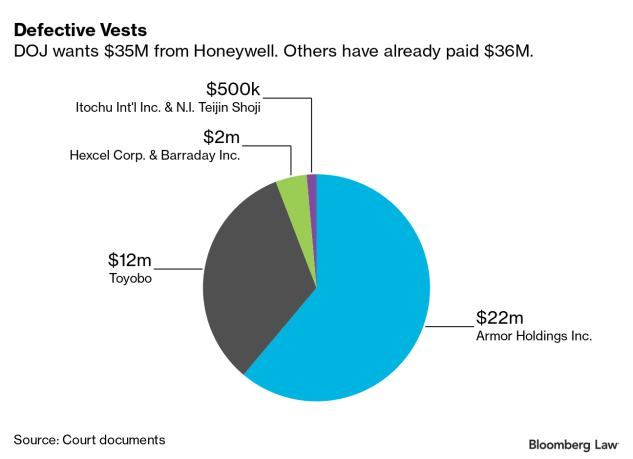 The government has recovered $120 million over the course of its body armor investigation, but only portions of those settlements involved Z Shield, Honeywell’s brief said.

A jury could find that that the government didn’t have actual knowledge of the extent of the degradation issue, and that Honeywell downplayed degradation information upon disclosing it to the government, the district court said in a November 2020 decision denying summary judgment.

Honeywell then sought an interlocutory appeal to the D.C. Circuit on the damages issue. The district court granted the petition in June 2021 after finding no controlling precedent on the issue.

On appeal, the government backed the proportionate share approach.

Affirming the the proportionate share ruling would be appropriate to ensure district courts keep flexibility to weigh the equities in a case, Slade said.

A “culture of fraud” can spread through the government contracting community if competitors think there’s an uneven playing field and conclude they must cheat to keep up, she said.

Making wrongdoers pay for the damage they cause can be more important than preventing overcompensation, she said.

But it is possible that the D.C. Circuit’s ruling will be limited because the government argued for proportionate share based on the equitable factors in the Honeywell case, Krueger said.

“It may be that the government makes the same arguments in other cases, too, but because the government is not arguing that the FCA mandates the proportionate share approach in every case, the D.C. Circuit is more likely to limit its decision to the circumstances at issue,” he said.