Government contractors and whistleblowers have as many questions as answers three years after the U.S. Supreme Court outlined what it takes to raise, and defend, a case alleging fraud under the False Claims Act.

The court has had many opportunities to review other FCA suits to clarify the opaque language of Universal Health Servs., Inc. v. United States ex rel. Escobar, which it handed down on June 16, 2016. But it has declined all of them, including a half dozen petitions for review filed this year, the most recent denial of which came just last month.

The high court’s refusal to further detail what a valid complaint must say to sufficiently allege falsity and materiality, and whether a contractor may defend itself from such charges by saying the government paid it anyway, arguably leaves two significant federal circuit splits in place on those issues.

“The muddled FCA landscape in the wake of Escobar and its mixed progeny leaves much uncertainty and many tactical challenges for practitioners attempting to navigate it,” said attorney Robert Rhoad of Nichols Liu in Washington.

Companies and individuals frequently targeted in these cases will continue to be left adrift, he said.

“They just want to to know rules of the game. They want bright lines. Most companies are saying just tell us what the rules are, but now they don’t have those rules,” he said.

In Texas, for example, a jury awarded a whistleblower and the government $663 million in a case accusing highway guardrail provider of providing inferior products to the Federal Highway Administration.

The U.S. Court of Appeals for the Fifth Circuit vacated the award for a lack of materiality, ruling that Trinity couldn’t be liable because the agency always paid for and approved the products.

, on the other hand, raised a similar rationale in its bid to end a whistleblower suit accusing it of misleading the Food and Drug Administration about HIV drug ingredients.

The Supreme Court declined to review both of those seemingly contrary rulings in January.

Whether the top court will revisit the FCA anytime soon is a matter of debate.

“At some point soon, the Supreme Court is going to have to clear up the conflicts over what plaintiffs have to allege and prove, and how much defendants can probe” into a federal agency’s practices to determine whether a breach was material, he said.

Whistleblower attorney Mike Bothwell, however, said he’d be surprised if the court decided it needed to clarify Escobar in the near term in light of the recent petition denials.

“I think they are good for a bit,” said Bothwell, of the Bothwell Law Group PC, in Roswell, Ga. 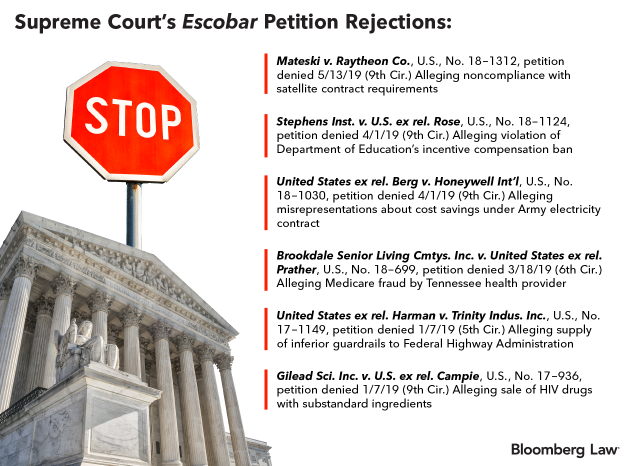 The Supreme Court in Escobar adopted the implied certification theory of FCA liability. This theory imposes liability on contractors who request payments while concealing their failure to comply with contract requirements that are critical to the government.

One involves whether a complaint must automatically fail for lack of materiality when a contractor shows that a government agency knew about noncompliance but nonetheless continued to make payments. The split over that defense is demonstrated in the Trinity guardrail and Gilead drug rulings decided by the Fifth and Ninth circuits respectively.

The other split involves what a complaint must say to adequately allege falsity.

The First, Third, Seventh, and Ninth circuits say a valid complaint must always identify specific misrepresentations a contractor made about performance, and allege that contract noncompliance was material to government payment decisions.

Other courts, like the Fourth Circuit, say the step that requires the whistleblower or government to spell out how the contractor promised to perform isn’t necessary.

Of the splits, the circuit courts’ diverging views on the continued payments defense arguably had the best chance of top court review this year. That is because the Supreme Court asked U.S. Solicitor General Noel Francisco to weigh in on the Gilead case.

The solicitor general’s view that a case should be accepted for review typically carries significant influence but, in this instance, he told the justices not to review the suit. The Justice Department would eventually move to dismiss the case, arguing it was a burden on government resources.

Rhoad said that the announcement of the DOJ’s plan to seek a dismissal probably showed that the government was afraid the Supreme Court would take the case but ultimately accept a national continued payments defense.

It also may show that “the government recognizes that Escobar could portend long, drawn out discovery and litigation in cases in which the question of materiality is front and center,” he said.

DOJ followed through with its plan, moving to dismiss the whistleblower case March 28. Dismissal is necessary to avoid undermining the actions and judgment of the FDA, which exercised oversight of Gilead’s manufacturing process and took actions where it deemed appropriate, DOJ said.

The district court has yet to rule on the motion.

Unless or until the Supreme Court says otherwise, contractors will still raise the continued payments defense, but, “I don’t expect courts to adopt those arguments where the government did not have actual knowledge of a violation,” said attorney Claire Sylvia of whistleblower law firm Phillips & Cohen LLP in San Francisco.

“In addition, where the government has good reasons to continue paying, the continued payment does not reflect that the government considers a violation unimportant,” Sylvia said.

This view is consistent with that of U.S. Senator Charles Grassley (R-Iowa). He took to the Senate floor in February 2018 to critique courts swayed by the continued payments defense strategy.

There are “a lot of reasons why the government might still pay a false claim. Maybe declining to pay the claim would leave patients without prescriptions or life-saving medical care,” Grassley said.

They also will aggressively pursue discovery about agency practices that bear on the issue, he said.

Rhoad said there will be “some jurisprudential ‘sausage making’ before resolution is reached.”

“Likewise,” he said, " it is becoming clear that lower courts will be fending for themselves for the time being.”

One significant case pending in the Eleventh Circuit is Ruckh v. Salus Rehabilitation. The whistleblower in that case has appealed a district court’s decision to toss a $348 million jury verdict against nursing home chain Consulate Health Care.

The jury received more than enough evidence to conclude the government wouldn’t have paid Consulate’s claims if Medicare knew the truth about its misconduct, the whistleblower told the appeals court. Consulate is alleged to have used improper Medicare billing codes to increase its reimbursements from the program. Oral argument is tentatively scheduled for September.