Businesses could end up the big winners in the of return of earmarks even though lawmakers specifically limited funding for these projects to state and local governments and non-profit groups.

Many of the governments and groups likely to receive earmarks in spending bills and the massive infrastructure package are expected to use that funding to hire construction companies, consultants and other contractors to carry out the projects.

“There’s benefit here to a whole lot more than governments and not-for-profits,” Sen. (R-Mo.), a senior member of the Senate Appropriations Committee, said in an interview. ”It’s all the people they work with and the projects they’re working on that can benefit by that investment.”

Billions in federal funds could be at stake. House leaders’ starting point is to earmark 1% of total annual discretionary spending. That could mean setting aside more than $13 billion for these projects, based on fiscal 2021 discretionary funding of $1.3 trillion. An infrastructure package like what President Joe Biden proposed totaling $2 trillion or more also could translate into billions of dollars in lucrative contracts for business. 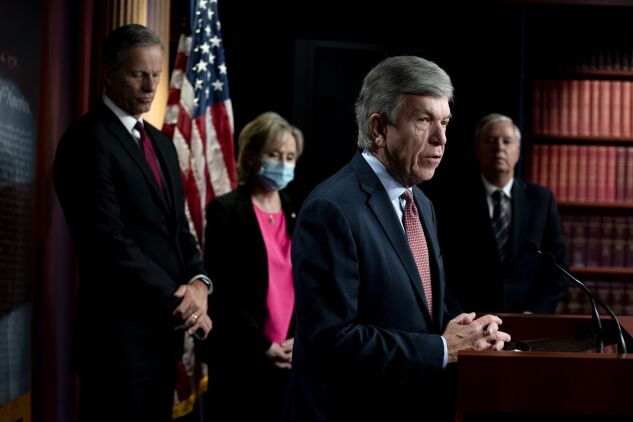 Full Senate support for earmarking appropriated funds may be decided Wednesday when Republicans meet to determine whether they will embrace plans that both Senate and House Democrats and House Republicans already endorsed. Blunt said he favors earmarks and said the projects will have broad impact.

Senate GOP Nearing Decision on Whether to Embrace Earmarks

Skin in the Game

Former Rep. Jack Kingston (R-Ga.) said including business-friendly projects will broaden support for the annual spending bills and infrastructure package. The appropriations bills will require 60 votes in the Senate which means they will need some GOP support. Biden has also said he wants some Republicans on board for infrastructure even if Democrats choose to use the reconciliation process that would allow the Senate to pass parts of it with a simple majority.

“You’ve got to have local skin in the game,” said Kingston, a Republican who served on the House Appropriations Committee. “If you want to get this done you do have to have a local directed project.”

Kingston, now with Squire Patton Boggs LLP, highlighted the importance of getting Georgia-based companies such as Gulfstream Aerospace Corp. and behind the proposals during a recent discussion about infrastructure legislation.

Other K Street firms also are talking up the new opportunities for business, particularly government contractors. “You’re not going to have the state and local government ultimately doing all or sometimes even a significant portion of the work. It will be contracted out to industry,” said Steve Cave, a partner at King & Spalding LLP, at a recent discussion.

“There’s absolutely an appetite” among lawmakers to direct the funds to enterprises in their states, and businesses should position themselves to participate in that process, Wintta Woldemariam, policy director for House Majority Whip (D-S.C.), said during the King & Spalding meeting.

Every member of the House can propose as many as 10 projects under the rules announced by House Appropriations Chair (D-Conn.).

Biden’s infrastructure plan included $571 billion for transportation projects, including roads and bridges, that will be build by private contractors.

“This will be the largest area where the contracting community is going to be interested,” said Tom Spulak, a partner at King & Spalding.

In contrast, the earmarks in the 12 appropriations bills will direct funds to entities across the board, from transportation and health care to homeland security and defense. But the new Community Project Funding, as the earmarks have been rebranded, is subject to many rules, including one requiring that lawmakers and their family members have no financial interest in the projects.

One large category of appropriations earmarks will be for priorities identified by state and local governments. The other will be for non-profit organizations, the so-called 501(c)(3) recipients of government grants, which also look to contractors to carry out much of the work.

Cave said many funds for projects will be directed to the Federally Funded Research and Development Centers, which include large firms like the RAND Corp., MITRE Corp., The Aerospace Corp., and Battelle.

“These are large entities and they will be relying on industry as they have historically, and I think if anything that will ramp up as a result of the earmarks, rather than sort of dwindle,” Cave said.

Construction firms that are hired by non-profit businesses are the “big potential winners” in this year’s process, said Jim Dyer, a former House Appropriations Committee staff director now at the firm of Baker Donelson.

“A university would propose a dorm or a health care entity a hospital and that means others have to build it for them,” he said.

‘Distinction Without a Difference’

Republicans adopted an earmark ban a decade ago after a series of scandals involving projects sponsored by members of both parties. In 2005, former Rep. Randy “Duke” Cunningham (R-Calif.) pleaded guilty to promising earmarks to military contractors, some of them buried in the Pentagon’s secret, or “black,” budget in return for bribes. President Donald Trump pardoned Cunningham just before leaving office.

“There’s almost no way to avoid federal money from an earmark going to a for-profit company for the purpose of completing a project,” he said. “It’s impossible. Non-profits don’t build bridges. So I think it’s another distinction without a difference like calling them community directed projects.”

Woldemariam said there will be a “healthy skepticism” about these projects, and companies that propose projects to lawmakers should make sure they follow the protocols and guidelines outlined by appropriators.

She said lawmakers “are going to be looking for high quality projects that some of the blind spots have been worked out.”

To contact the editors responsible for this story: at broth@bgov.com; at sbabbage@bgov.com