Afghanistan National Army soldiers undergo training by a U.S. contractor at Camp Leatherneck on the outskirts of Lashkar Gah in Helmand Province, Afghanistan, in May 2011.
Photographer: Massoud Hossaini/AFP via Getty Images

“The timetable to do this properly is already too tight,” said David Berteau, president of the Professional Services Council representing 400 government contractors, many working in Afghanistan. “We don’t have years, we have only months.”

The Defense Department has 16,832 workers employed by contractors in Afghanistan, of whom 6,147 are U.S. citizens. That’s more than double the remaining 2,500 U.S. troops. Contractors support the military with everything from lodging, laundry, and food to transportation, equipment maintenance, and fuel. Since 2002, the Pentagon has spent $107.9 billion on contracted services in Afghanistan, a Bloomberg Government analysis shows. “We need a much clearer idea of what the endgame looks like,” Berteau said. “None of that has been revealed to us or our member companies and that is what we’re calling for.”

The contractors’ alarm signals how complicated and fraught with risk the U.S. withdrawal from Afghanistan will be after almost two decades of combat against an entrenched network of armed forces, and with thousands of contractors supporting U.S. military operations.

Biden set the pullout deadline for the 20-year anniversary of the terrorist attacks on New York and Washington.

The largest vendors with Pentagon contracts in Afghanistan are . with $3.1 billion spent between 2016 and January 2021, and Amentum Parent Holdings LLC, with $1.7 billion during the same period. 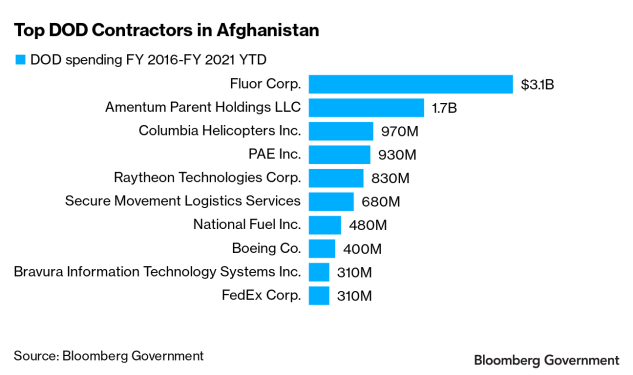 Contract data is available only through the first half of January 2021. Both Fluor and Amentum’s largest contract is known as a logistics civil augmentation program. In short, it’s an indefinite delivery and quantity contract given in multiple awards.

Amentum doesn’t have a comment for this article, a company spokeswoman said. Fluor officials didn’t respond to a request for comment.

The Pentagon also has spent $1.2 billion for helicopter transport during the same 2016 to January 2021 period, primarily with two companies: Columbia Helicopters, at $966 million, and Construction Helicopters Inc. at $229 million. The Pentagon spent $935 million over four years on contracts with PAE Inc. to include training and mentoring, and for the Afghanistan technical equipment maintenance program.

Meanwhile, one vendor—Secure Movement Logistics Services—received $680 million for petroleum, oil, and lubricant product support. The complete withdrawal of U.S. troops from Afghanistan makes it likely that fuel services will no longer be needed in the country. 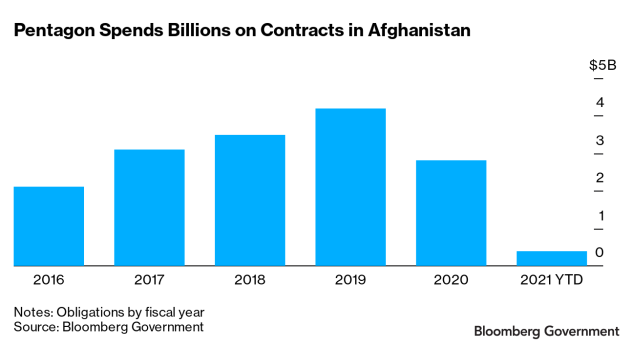 The preliminary plan is for at least some contractors to leave during the military withdrawal from Afghanistan, Pentagon spokesman John Kirby said this month after Biden’s announcement. The Pentagon has yet to provide details on how many contractors will be extracted. Kirby indicated plans are in flux and could change.

The departure of contractors was largely ignored as the focus shifted to when Biden would withdraw the military, Sopko told a forum organized by the Center for Strategic and International Studies.

The Afghan government relies on contractors to train in using, and maintain, U.S.-supplied equipment such as .’s UH-60 Blackhawk helicopters and C-130 transport aircraft, he said.

The Pentagon is looking at alternatives to help the Afghans in the maintenance effort from a distance, McKenzie said. “We may be able to work some remote, televised way to do that,” he said at the Pentagon on Thursday. “We’re going to try all kinds of innovative ways. The one thing I can tell you is we are not going to be there on the ground with them.”

The U.S. decision to send Blackhawks to Afghanistan that the local security forces can’t operate or maintain is ripe for fraud and abuse, said Jason Dempsey, an adjunct senior fellow at the Center for a New American Security. 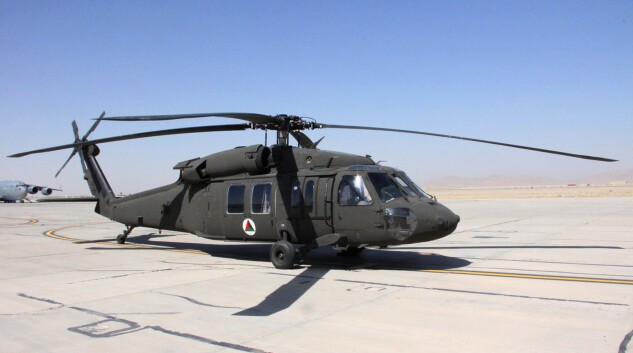 “I see it as a total boondoggle,” Dempsey said in an interview. To support the Afghan air force, the U.S. would have to keep sending in contractors, he said, and “contracts are going to be ridiculous” going forward.

“We are going to put in a bunch of contractors, they are going to get hundreds of millions of dollars to maintain this fleet, and the fleet is not going to be used,” he said.

Without contractors, none of these aircraft can remain effective for combat for more than a few months, Sopko warned. Dyncorp International, now a part of Amentum, in December won a task order valued at up to $554 million for support of aircraft. The company said in a statement it would hire 250 people to start work in Afghanistan and Huntsville, Ala., where the program is managed.

“The key thing is always, what does that detailed planning order look like, and what is the end state?” McCusker, now a resident fellow at the American Enterprise Institute, said in an interview.

“Moving the forces out is not as big of a deal; it’s the equipment and then the reset that has to take place. Are you bringing that equipment out of the Middle East, are you just bringing it out of Afghanistan? Where is it going? How much is coming back to the U.S.?” McCusker said. “Those are some of the considerations that are going to play into what the final plan looks like.”

Meanwhile, the Pentagon’s acquisition officials are working on a strategy for any modifications for contracts that support U.S. forces. “But let’s face it, they also support coalition forces,” McCusker said. “It’s not just us that we want to look at what is provided through those contracts.”

The situation “cries out” both for individual review of the specific contracts, and a national review of contracts that would make sense to continue in order to support the Afghan government, and those that the Afghanis can maintain, Berteau, from the Professional Services Council, said.

“This is the kind of effort that if you started today, you’d be at a hard run to be finished by Sept. 11,” he said. “And you don’t even see a sign that it is underway today.”

Further complicating the situation, the Pentagon plans to base some U.S. troops in the region for future counterterrorism operations in Afghanistan, should they be needed. The U.S. doesn’t have basing agreements with countries around Afghanistan, even as the troop withdrawal is set to begin May 1, McKenzie told lawmakers April 20.

“Any kind of direct support for the military—which from the military’s point of view of course is indirect support—anything like that goes where the military goes,” said Dov Zakheim, the Pentagon’s comptroller in the George W. Bush administration. “Who are they going to serve meals to? If they have been providing fuel to the military, they are no longer going to have to, because there is no more U.S. military to provide fuel to.”

Still, some of the support for contractors now in Afghanistan would have to be reset for those working wherever U.S. troops settle in the region, Zakheim said. Contracts will have to be modified, he said, and the Pentagon could potentially spend more money to set up new bases for the military.

“The military fully understands that this going to be a logistical nightmare,” Zakheim said.